PlayToPickUp is a serious game that stimulates children in the relevant cognitive aspects (attention, planning task and error monitoring) while performing tasks that replicate the activities of daily life, such as preparing the backpack, recognising money or emotions.

Cognitive developmental disorders are common in children and affect the language or attention area, such as attention deficit and hyperactivity. In these cases, the individual is unable to engage and interact effectively with the environment, resulting in difficulties in learning and autonomously carrying out daily activities. For these reasons, this work proposes a solution that aims to stimulate children in the relevant cognitive aspects, which are attention, planning tasks and error monitoring. The proposed solution is PlayToPickUp, a serious game that supports tasks that replicate the activities of daily life, such as preparing the backpack, recognising money or emotions.

Previous work on serious games to cognitively stimulate young people includes a proposal by Fontana et al. [1] who put forward Train Brain, a serious game for selective attention training, based on memorising images in one or more contexts using coloured circles. However, in general, previous work lacks proposals to support children in their daily routines, so we thought it would be interesting to address this aspect in a new solution, which also takes into account emotional-related aspects of the target population.

Design
The serious games design and implementation was driven by aspects and requirements gathered in state-of-the-art analysis, interviews, empathy maps and personas. For example, it was found that these children have low self-esteem as they tend to maximise their weaknesses and minimise their strengths, isolate themselves for fear of rejection and seek attention with cocky attitudes.

The PlayToPickUp game [L2] has been designed to reproduce some scenarios that children may encounter in their daily life: preparing the backpack, recognising money or emotion representations, stimulating sustained attention, planning skills and error monitoring. The objective of this game is to help the main character (a robot) to collect some target objects (school- or money- or emotion-related). The game is a responsive web-based application, therefore available on different platforms (tablet, smartphone, PC) and has four difficulty levels that automatically increase as the game progresses. Each difficulty level has three sub-levels where dynamic objects move, respectively, in the following ways: vertical, horizontal, and vertical with the initial position of the elements set randomly. When objects appear, the user has to collect those elements that are relevant (targets) by moving the character, while not being distracted by other non-relevant elements (distractors). 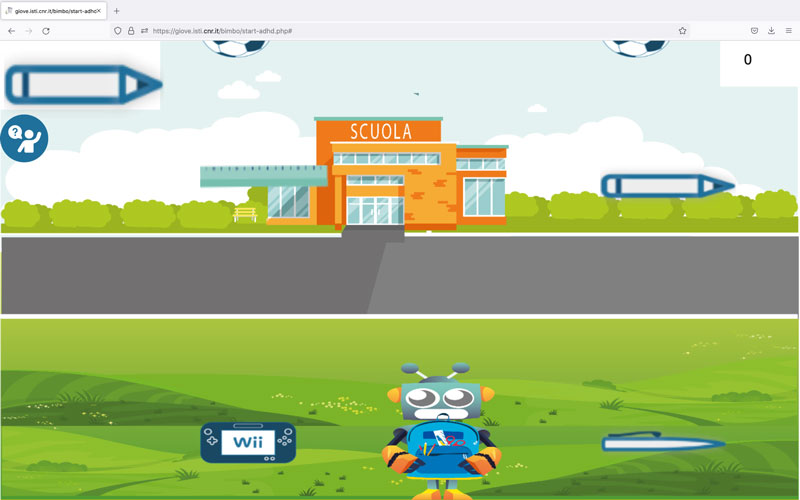 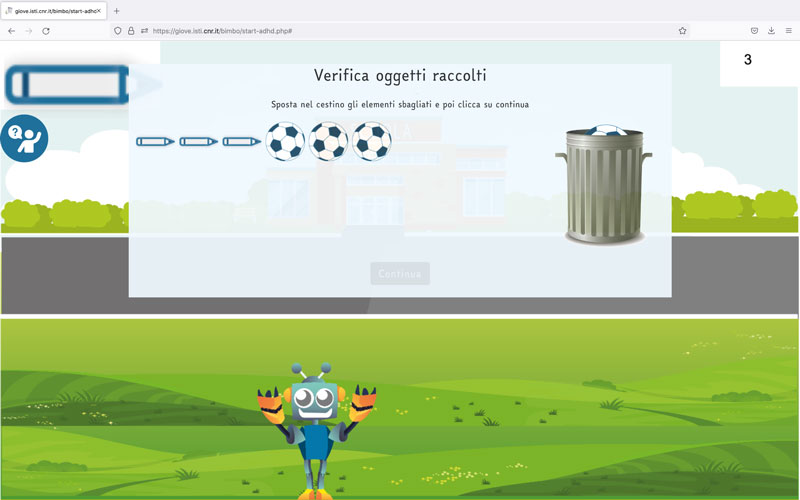 At the end of the game, for each sub-level, the child has to check the objects that have collected and drag those not relevant into a basket (in the school scenario) or an “emotion suitcase” (emotions scenario), or to the corresponding textual description (money scenario).

Depending on the characteristics of the child, the operator can customise the game by configuring some parameters, such as the speed of falling of the elements and the scenario. Thus, the game offers a range of options to provide a training that best fits with the skills of the child, thus limiting the possibility of being received as repetitive.

Trial
A trial has been carried out. The participants are children with cognitive impairment followed by the PAIM Social Cooperative of Pisa. 27 children, aged between 8 and 12, are participating in the study. The tests have been conducted by the PAIM operators during one/two weekly meetings over two months.

In the trial, three questionnaires have been proposed: the first, administered before the start, aimed at collecting information on the user's digital skills; the second and the third ones, administered after using the game, respectively to the child and the operator, to collect information about the user's experience of the game.

Preliminary results have shown positive feedback from the children, as 12 out of 17 children felt happy after playing serious games. In addition, the data collected indicate that the majority of the children tended to make fewer errors over time during the training sessions, especially at some levels of difficulty of the game. Also, the operators have provided positive feedback, as in their view the children perceive the exercise as a playful activity, albeit with the primary objective of cognitive training, such as attention, and to transfer playful activities into everyday life, such as recognising money and preparing the backpack.

Conclusions
This study stems from the consideration and awareness that studies and research on innovative interactive applications for children with cognitive disorders are necessary and important.

To this end we offer PlayToPickUp, a serious game designed for children with cognitive disorders, and the implemented game has been used by a group of children aiming to improve their cognitive abilities. The results of the users' tests were encouraging; the structure of serious games seems to be suited to their needs for fun and ease of interaction, and to their cognitive stimulation.

We plan to extend the user study with other groups of children that can benefit from the approach proposed.