This article discusses the potential of including people with autism in digital work, giving them an opportunity to have personalised and remunerated work. The authors of this article are working in cognitive personalisation of microtasks (a simple form of digital work) so it can be adapted the digital work’s assumptions to the worker abilities. A planned case study will include people with autism, whereby their digital interactions in the microtasks will be recorded and used for the cognitive personalisation.

Social exclusion can be defined as individuals who are unable to obtain various human rights or realities that are often available to another group of individuals [L1]. People with disabilities are unfortunately targets of prejudice in the workplace, as a result of stereotypes [L2] [L3]. Autism is defined by the American Psychiatric Association as “a disorder in the development of a person, characterized by difficulties in social interaction, communication, and restrictive and repetitive behaviors” [1]. It is estimated that there are around 25 million people with autism worldwide [L4]. Autistic individuals have several limitations in their social interactions, including in the actions they perform in their daily lives [L5] [L6]. Social limitations result in increased isolation, which in turn is related to the deterioration of quality of life [L7]. Working helps to combat the effects of isolation [L8]. A study conducted by Müller and Schuler [L9] identified social difficulties from the perspective of individuals with autism, and revealed that most participants would like to be able to contribute to improving the environment that surrounds them.

Given the various possibilities of overcoming cultural and social barriers, digital work provides the opportunity for people with autism to have financial compensation and helps them to feel fulfilled. Crowdsourcing is a new reality of digital work, which mostly consists of microtasks, which are tasks with a low level of complexity that can be carried out in a short time [L10]. Microtasks broaden the spectrum of people who can access the digital job market; however, it was identified in a study that for microtasks, work assumptions and workers' capabilities are misaligned [L11].

The correct mapping allows a significant increase in the quality of work performed, as well as the motivation of workers. Cognitive personalisation has the potential to adapt microtasks to workers, thus allowing for increased accessibility and inclusion of people with disabilities and people with autism. In crowdsourcing, there is already research work done at the distribution level with the mapping of microtasks [2]. There is still a need to explore the cognitive personalisation of microtasks in its design. This will allow that, regardless of the published micro-tasks, as well as the worker who will perform them, the tasks can be adapted to the individual's capabilities. Cognitive personalisation can be done by applying cognitive tests to assess capabilities or using microtask fingerprinting. The former is used by adapting psychometric tests into short microtasks. The latter comprises assessing the digital worker’s behaviour while performing the microtasks, such as the key presses, number of clicks or even the click details [3]. This method of microtask fingerprinting develops prediction models based on Machine Learning, to identify behavioural traits of workers.

The authors of this article propose that microtask fingerprinting, including the application of digital cognitive tests, can have the potential to include people with autism, upkeeping their motivation, introducing them to the digital work marketplace, and allowing that the work performed can have good quality.

To accomplish this, an architecture and a system for cognitive personalisation applied to the design of microtasks in crowdsourcing is proposed. The architecture includes an ontology, built from other existing ontologies, for the representation of knowledge including the concepts of microtasks, cognitive abilities and types of adaptation in order to customise the interface to the worker. The ontology incorporates an existing ontology called ACCESIBILITIC [L12], which represents knowledge about accessibility and activity-centred design to support usage of technologies, and includes a taxonomy of concepts of cognition from the International Classification of Functioning, Disability and Health (ICF) [L13]. The proposed system contains a backend and a frontend that serve as an intermediary layer between the microtask platforms and workers. The ongoing work contains results from 130 microtask workers, including their performance on prototypical microtasks and cognitive tests. In both microtasks and cognitive tests, we recorded the digital worker behaviour, namely the key presses, click movements and click details, which can be used for predicting the digital work quality and thus be used for optimizing personalisation. For future work, it is intended to test this system and the proposed method on people with autism and verify the potential to include them in the microtask marketplace. 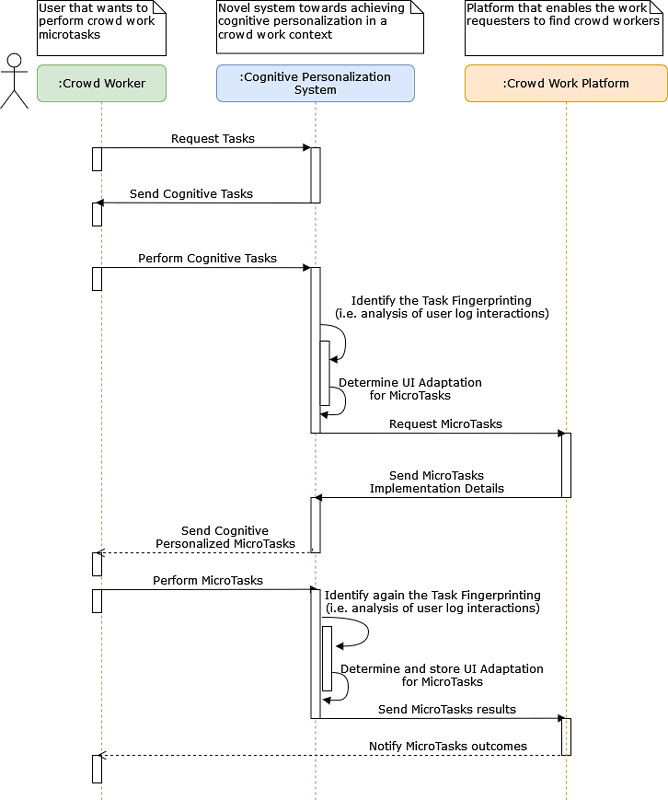 This research is part of the scope of a doctoral thesis that is hosted by INESC TEC and University of Trás-os Montes e Alto Douro in Vila Real (Portugal), with funding from FCT – Fundação para a Ciência e a Tecnologia (Portuguese Foundation for Science and Technology) with research grant SFRH/BD/148991/2019. The authors also recognise support from the European Social Fund of the North Portugal Regional Operational Programme.

Please contact:
Dennis Paulino
INESC TEC and University of Trás-os Montes e Alto Douro, Portugal
This email address is being protected from spambots. You need JavaScript enabled to view it.