The Nordics shift into high quantum gear, as the Nordic-Estonian Quantum Computing e-Infrastructure Quest, NordIQuEst, begins in early 2022. The three-year project will connect world-leading traditional high-performance computing resources and quantum computers across national borders, establishing a quantum computing platform customised to the needs of the region.

A useful computational infrastructure requires three main components: hardware, software, and end-users. Funded by the Nordic e-Infrastructure Collaboration (NeIC) [L1], NordIQuEst brings together a consortium of seven partners from five countries, each with complementary expertise and resources required for laying the foundations for a cross-border quantum-computing infrastructure. Chalmers University of Technology in Sweden and VTT Technical Research Centre of Finland will connect their quantum computers to the NordIQuEst effort (see Figure 1). CSC – IT Center for Science, Finland, hosts a high-end quantum computer emulator and the leadership-class LUMI EuroHPC supercomputer [L2], both of which will be interfaced to the ecosystem. Simula Research Laboratory, Norway, hosts the eX3 high-performance computing research infrastructure, which will be made available for experiments with various quantum simulators. Together with the University of Tartu, Estonia, SINTEF, Norway, and the Danish Technical University, the required user and computer interfaces as well as program libraries will be set up. Special emphasis is put on end-user engagement, training and education. 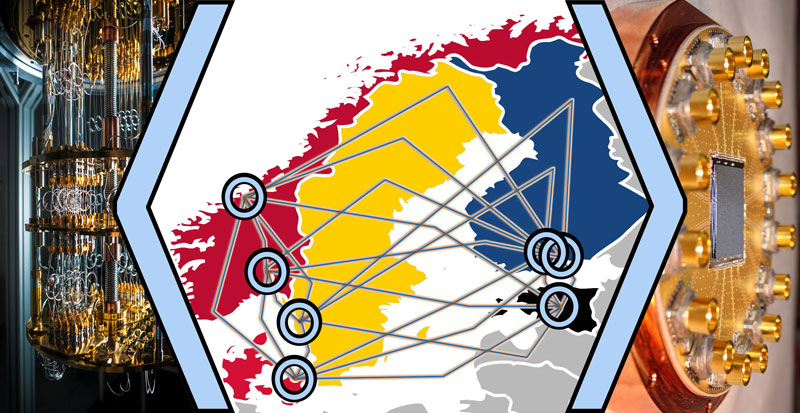 Figure 1: The NordIQuEst consortium bra-keted by components for the QAL9000 quantum computer of the Wallenberg Centre for Quantum Technology (WACQT) at Chalmers. QAL9000 and the Finnish Quantum Computer constructed by VTT Technical Research Centre together with IQM Quantum Computers are the first physical quantum computers that will be connected to the NordIQuEst platform. Photos by Johan Bodell/Chalmers (dilution fridge, left) and Hangxi Li/Chalmers (quantum processing unit, QPU, right).

Quantum computing promises to accelerate high-performance computing, with speed-ups expected for most, if not all, workflows that involve computational modelling. For this to happen, both quantum hardware and software need further development. On the hardware side, giant technological strides have been taken in recent years, and several demonstrations where quantum computers have outperformed classical supercomputers have already been reported. These proof-of-concept calculations have shown that quantum acceleration is actually possible, and allowed by physical law. The next step is to reach quantum advantage for real-world modelling problems.
Now, it is important to note that quantum computers are not super-charged versions of classical computers. They solve problems in a fundamentally different way compared to the binary computers we are used to. For some computational tasks, quantum computers provide little to no advantage. For others, the speed-ups can be exponential: what would take the age of the universe on classical supercomputers could be done in hours on upcoming quantum computers [1]. Thus, the supercomputers of the future will seamlessly merge classical and quantum resources [2].

To achieve the promised leaps in performance, the programs, or quantum algorithms, have to take advantage of quantum mechanical phenomena that are missing in classical computer programming [L3]. These include superposition, entanglement, and wave-function interference. In addition, quantum computers are probabilistic by nature, in stark contrast to the clock-work determinism of classical computers. This means that existing computer programs cannot simply be “recompiled” to run on quantum computers. Instead, fundamental rethinking, reformulation, and rewriting of algorithms is required; problems have to be recast in a format that is amenable to computation on quantum hardware. This is no trivial task, and requires support and dedication. NordIQuEst aims to provide exactly this.

The Nordic region, including Estonia, boasts a solid and established competence in traditional software development. To support the extension of this tradition towards quantum software development, access to a mature quantum computing infrastructure is crucial. The end-user should be provided with the best tools possible for their purposes, and the user should not have to learn a completely new field of science to be able to use the tools. The educational aspect of the infrastructure is equally important, and will help to increase quantum-literacy, educating a future quantum workforce. For this, NordIQuEst provides low-barrier access to the technology, reaching students at various levels as well as professionals that could either utilise or further develop quantum computing.

Only when both hardware and software are in place, can ground-breaking science be conducted on quantum computers. Striking a balance between hardware and software design is especially important now, when the technology is still emerging and fast-developing. Continuous cross-talk is key. Hardware developers need feedback from algorithm developers in order to improve their technology. Software developers, on the other hand, need access to the actual quantum hardware that their algorithms will run on. Environmental noise affects the calculations on quantum computers, and therefore the behaviour and accuracy of any given quantum algorithm is difficult to predict a priori. The real-world performance of quantum algorithms can only be established and improved by experimenting and testing. Through NordIQuEst, both hardware and software development in the Nordic region can shift into higher gear.

The project showcases the power of collaboration: collaboration across countries, across scientific disciplines, across different levels of education, and across different modes of research activity. The NordIQuEst infrastructure is laying the foundations for a thriving, collaborative quantum technology ecosystem in the Nordic region. The groundwork performed within this three-year project will result in a fully operational, modular, and extendable quantum e-infrastructure. Quantum computing is a technology of the future, for the future; the quest for reaching its potential begins today.

Please contact:
Mikael Johansson
CSC – IT Center for Science, Finland
This email address is being protected from spambots. You need JavaScript enabled to view it.

Göran Wendin
Chalmers University of Technology, Sweden
This email address is being protected from spambots. You need JavaScript enabled to view it.