In the years to come, quantum computing will find applications in different industries - from IT and finance to transportation. Within the medical industry, quantum technology has the potential to reduce the time it takes to develop new drugs as well as speed up the computationally demanding tasks of analysing and interpreting large amounts of biological data. The new Novo Nordisk Foundation Center Quantum for Life based at the University of Copenhagen has taken up this challenge. But new quantum hardware alone will not get us there. It will require the development of an entirely new type of software – quantum software.

One hundred years ago, scientists discovered that particles did not behave as they expected. The physical laws describing the world that human beings can see or touch cannot explain the behaviour of atoms and subatomic particles. This discovery led to the development of quantum mechanics, which allows us to describe the strange behaviour of the particles very accurately.

This is often referred to as the first quantum revolution. We began to understand materials such as silicon and this allowed us to build transistors, thereby creating the modern computer.

Strange consequences of quantum theory, such as new forms of correlation (also known as Einstein’s spooky action at a distance) were noted, but the full potential of quantum theory had not been realised.

In the 1990s, researchers envisioned how to use quantum effects to compute in novel ways. At the same time, huge progress in high precision manipulation of single atoms was made in labs around the world. This started what is now known as the second quantum revolution. 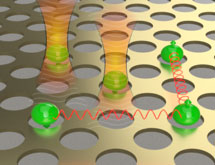 Figure 1: Atoms trapped in grid simulating the correlations in a molecule.

The second quantum revolution
Today, we are in the midst of the second quantum revolution and the race to build the quantum computer. Professor in quantum software at the University of Copenhagen, Matthias Christandl explains:
“The scientific community has reached an engineering mindset. We no longer just use materials with quantum properties to build things like computers, cell phones or laser technology. We are now building, controlling and manipulating our own quantum systems. Instead of building bits, we are building quantum bits or qubits that cannot only be 0 or 1 but 0 and 1 at the same time – they are in superposition, as we quantum researchers like to say. And we are asking ourselves how to put the future quantum computer to use.”

Using the extraordinary properties of quantum systems, researchers have discovered a completely new way of processing information and it opens up a world of new algorithms – quantum algorithms. These include faster algorithms for search and optimisation and even a new type of machine learning.

Possibility of quantum leap in life science
Using quantum algorithms, researchers at the Quantum for Life Center want to develop quantum software with huge potential for the medical industry. With a grant of approximately 8 million USD from the Novo Nordisk Foundation, the researchers have set out to demonstrate how a combination of quantum hardware and quantum software can help in two essential ways: First, enable us to speed up computationally demanding tasks in bioinformatics and second, enable faster simulation of biomolecules for drug discovery.

Computing muscle in high demand
Modern life science depends on computing muscle. One way computers are used is to analyse the huge amounts of data that the can be found in, for example, DNA. Anders Krogh, who is professor at the University of Copenhagen and a principal investigator at the Quantum for Life Center, was among the first to introduce machine learning into the analysis of proteins and DNA. He will identify computationally demanding tasks in bioinformatics which could profit from quantum algorithms and develop new forms of quantum machine learning for faster handling of big data.

The movement and bonds of the electrons govern how molecules react with each other and therefore what characteristics they have. Some bonds can be modelled relatively accurately with standard computers, but this cannot be achieved for more complex bonds.

Matthias Christandl explains: “If you take on the task to write down all the potential quantum states of such a molecule, you will find it to be impossible. You would need more paper than exists in the world. Remember, the electrons in a molecule can be at two places at the same time. Simulating their properties accurately is only possible using a quantum computer which can have bits that are 0 and 1 at the same time.

Markus Reiher, a world expert in computational chemistry based at ETH Zurich, will identify the computational bottlenecks in the classical simulation of large molecules, one of the challenges in drug design. Together with Matthias Christandl and their teams, he will develop novel quantum software that will circumvent the bottlenecks.

Building the hardware
Building the hardware of a universal quantum computer, the quantum analogue of a Turing machine, remains a daunting challenge. However, it is expected that more specialised quantum hardware, “quantum simulators”, could run useful quantum algorithms in the near future.

Eugene Polzik, professor at the Niels Bohr Institute known for his early work on quantum teleportation, will contribute to this part of the project by building the quantum hardware. More precisely, a novel platform for quantum simulation, where single atoms will be held by individual tweezers made out of light. They will be configured to mimic the shape of atoms in a molecule, thereby running the quantum software developed by his fellow Quantum for Life researchers.

Matthias Christandl states: “With the exciting research we carry out in the center we have the ambition to create the nucleus for a Danish Quantum Life Science Industry benefitting not only research and education, but also society as a whole.

Acknowledgements: We thank the Novo Nordisk Foundation for financial support and Daniel Stilck França for valuable input to the article.

Please contact:
Matthias Christandl, Center Leader
University of Copenhagen, Denmark
This email address is being protected from spambots. You need JavaScript enabled to view it.