Entanglement, one of the most intriguing features of quantum mechanics, has many applications in quantum information technologies. An area of ongoing research is to understand and control the dynamics of entanglement between two qubits at the nanoscale by tuning their interaction with photonic nanostructures. Similarly, further work is needed on the fast and robust generation of entanglement in various quantum systems frequently encountered in quantum technologies using state of the art quantum control methods.

Quantum entanglement [1], the quantum correlation between two or more quantum systems linked in a way that their states remain linked independently their separation, is one of the most important and characteristic elements of quantum mechanics and has played a central role in the discussions of the fundamentals of quantum theory. Entanglement is also an essential ingredient in the areas of quantum communication, quantum information and quantum computing. For practical purposes, an important issue is to create entangled states between two material-oriented qubits and to understand the dynamics of entangled states, especially at nanoscale distances, since the entanglement dynamics provide useful information on how a composite quantum system, for example two qubits, exchange information, as well as on how this information is preserved over time. This is a crucial problem since entanglement is a fragile quantum resource in the presence of undesirable interactions with the environment, like decoherence and dissipation.

In some cases, however, dissipation can act as the mediator for creating entanglement between two qubits, especially when the qubits are placed in a modified microphotonic or nanophotonic environment. An example of such situation is when the qubits are placed at nanoscale distances from plasmonic (metallic or metal-dielectric) nanostructures. Part of our recent research work is devoted to exploring the creation of high degrees of dissipation-driven entanglement between two quantum emitters (qubits) that may occur via coupling of the qubits and the localised resonances of photonic nanostructures [2].

Specifically, in collaboration with Vassilios Yannopapas of the National Technical University of Athens, we have analysed the strongly non-Markovian entanglement dynamics, as well as the dynamics of more general quantum correlations, like quantum discord, of two initially entangled qubits in various initial quantum states that interact independently with a metallic nanoparticle [2]. We have found that the dynamics of both quantum entanglement and quantum discord depends strongly on the material of the qubit, on the distance of each qubit from the corresponding metal nanoparticle, as well as on the purity of the initial entangled state. Interesting phenomena are identified by varying the initial state or the distance of each qubit to the corresponding nanoparticle, including entanglement sudden death, periodic entanglement revival, entanglement oscillations and entanglement trapping.

Another significant part of our research effort is devoted to the efficient, i.e., fast and robust, generation of entanglement in quantum systems. In order to find the electromagnetic fields that can efficiently generate entanglement between the qubits of a quantum system, we use state-of-the-art quantum control methods, like shortcuts to adiabaticity and optimal control.

Shortcuts to adiabaticity were developed over the last decade to accelerate quantum adiabatic evolution, where the parameters of a quantum system are slowly varied so the system moves along one of its eigenstates, which initially coincides with the starting state while at the final time has been transformed to the target state. On the other hand, optimal control was developed during the Cold War in the context of space race to answer questions like: what is the minimum-time or minimum-fuel trajectory to the moon? In the framework of quantum mechanics, it is exploited to find the electromagnetic fields which can drive a quantum system to a desired target state in minimum time or with maximum fidelity.

As an example, we consider a quantum system composed of two coupled qubits, which are initially unentangled, both being in the same spin-down state. The goal is to find the optimal controls, for example the components of the magnetic field, which quickly drive the system to the maximally entangled Bell state shown in Figure 1, by maximising its fidelity for a specified duration [3]. The Bell state fidelity, which is achieved with shortcuts to adiabaticity (light blue) and optimal control (red) is also displayed versus the duration of the operation. While the simple adiabatic passage evolution requires about 30 units of time to prepare a fidelity close to one, shortcuts to adiabaticity and optimal control need about 10 and 2.5 units, respectively [3]. The optimal components of the applied field corresponding to the minimum necessary duration (2.5 units), as well as the corresponding time evolution of populations for the initial and target states are also presented in Figure 1.
The research is implemented through the Operational Program “Human Resources Development, Education and Lifelong Learning” and is co-financed by the European Union (European Social Fund) and Greek national funds (Project No. ΕΔΒΜ34, code MIS 5005825). 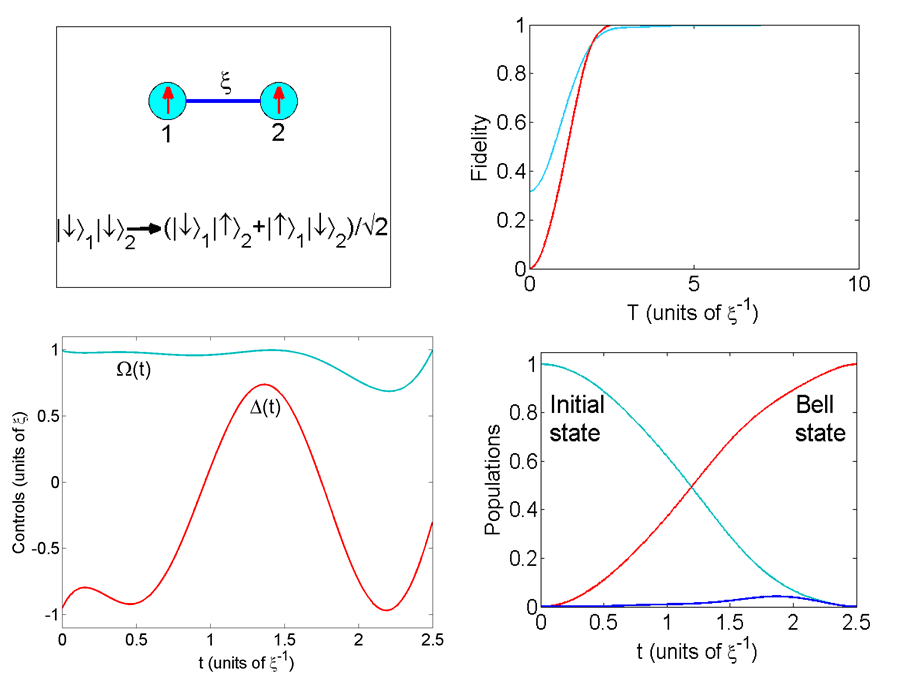 Please contact:
Ioannis Thanopulos, University of Patras, Greece
This email address is being protected from spambots. You need JavaScript enabled to view it.

Dionisis Stefanatos, University of Patras, Greece
This email address is being protected from spambots. You need JavaScript enabled to view it.

Nikos Iliopoulos, University of Patras, Greece
This email address is being protected from spambots. You need JavaScript enabled to view it.

Emmanuel Paspalakis, University of Patras, Greece
This email address is being protected from spambots. You need JavaScript enabled to view it.