Atomic hydrogen is useful in quantum computing applications, owing to its simple atomic structure and the lack of complex magnetic interactions – a characteristic that is crucial for preserving the fragile electron spin coherence. Trapped in proper molecular nanocages, the otherwise highly reactive hydrogen atom becomes stable even at room temperature. This article discusses the aims of the active INN research project, “Spin-Based Quantum Computing”, along with the recent developments in the design and characterisation of encaged atomic hydrogen as spin qubit.

Over the last two decades, the field of quantum computation has seen spectacular progress not only at the theoretical level but also within experimental physics, chemistry and materials science. Researchers have made huge headway into developing quantum algorithms that demonstrate a remarkable ability to solve computational tasks, and there is increasing interest in finding appropriate physical systems to implement key concepts of quantum computation, such as entanglement and superposition. To this end, electron and nuclear spins are considered promising quantum information elements (qubits), because they are natural two- (or higher) state systems with relatively long coherence times that can be controlled using well-established magnetic resonance techniques.

The implementation of quantum algorithms requires qubits with long-lived coherent superposition states. The robustness of spin qubits against decoherence depends critically on the two characteristic electron spin relaxation times, namely the spin-lattice relaxation time (T1) and the phase memory time (TM), which must be much longer than the time required for the quantum operation. T1 is determined by spin-phonon interactions, which involve energy exchange between the spin system and its surrounding matrix. On the other hand, TM originates from pure dephasing mechanisms induced by dynamic interactions between the electron spin and surrounding magnetic nuclei or by flip-flop processes associated with intermolecular dipolar coupling.

Among the proposed physical systems that possess electron and nuclear spins, endohedral fullerenes like N@C60 and their chemical derivatives have received the most attention because they combine the benefits of molecular materials and isolated spins: they can be precisely assembled into large arrays by chemical engineering and, under favourable conditions, they exhibit long TM values that reach the record of 160 μs at a temperature of 200 K. The hydrogen atom, nature’s most essential element, is the simplest radical with the electron occupying the 1s orbital and being hyperfine-coupled to the proton nuclear spin with a large coupling constant of 1420 MHz that corresponds to the transition frequency of the famous 21 cm line. Owing to its simple electronic structure and the absence of spin-orbit coupling interactions, the electron spin coherence times of atomic hydrogen are expected to be significantly larger than any other molecular spin system. The aim of this project is to investigate whether atomic hydrogen can rival N@C60 in terms of electron spin relaxation times.

Whilst C60 cannot stably host atomic hydrogen, it has been found that polyhedral octa-silsesquioxanes (POSS) (Figure 1a) are ideal traps for this purpose. These hybrid organic-inorganic species contain novel nanocages of the Si8O12 core that can be easily prepared using sol-gel chemistry methods. Upon γ-irradiation, these nanocages can stably host hydrogen atoms both in solution and solid state with remarkably long half-life times of 40 years at 273 K.
Crucial properties for quantum computing, such as electron spin relaxation times T1 and TM, are probed by electron paramagnetic resonance (EPR) methods that typically employ microwave pulses (Figure 1b). Such pulses are also used to manipulate the electron spins and perform the necessary operations that are the building blocks of quantum algorithms.

Although the trapped hydrogen atom is isolated from the environment, its electronic spin still interacts with all surrounding magnetic nuclei through the dipolar hyperfine coupling. This affects the electron spin coherence in two ways: first, two neighbouring proton nuclear spins can undergo mutual spin flips, which in turn modulate the dipolar interaction. Second, thermally activated processes like methyl group rotation add another time-dependence to the hyperfine interaction. Both dynamic effects act as magnetic field noise that favours decoherence.

The suppression of such effects in solid state systems is challenging and includes the application of dynamical decoupling methods (Figure 1c) or the chemical modification of the environment (e.g. substitution of protons by deuterons that have about 6.5 times smaller nuclear magnetic moments). Previously, we were able to isolate such mechanisms and extent the coherence time TM up to 55.0 μs at T= 200 K (Figure 1d) [1], whereas, recently, we showed that deuteration of the cage resulted in the same TM value [2]. Moreover, using different POSS derivatives, we described the key role of the rotational degrees of freedom of the cage substituents R in the determination of TM (Figure 1e) [3].

These studies revealed the extremely long T1 value of 120 s (at 5 K) that can be harnessed to design new spin-based quantum memories. They also proved that TM can be extended to about 100 μs (at 190 K) which allows for high fidelity quantum gate operations to be performed. Future efforts include proper design of POSS cages to overcome methyl rotations and demonstration of one-qubit NOT gates by means of Rabi oscillations. Other encapsulation methods that provide higher loading of cages will also be investigated. 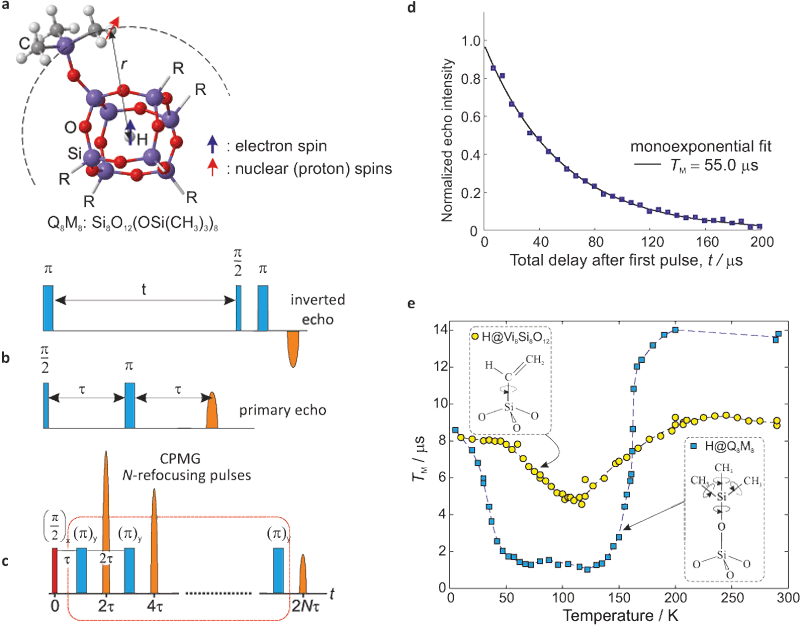 Please contact:
George Mitrikas
INN NCSR Demokritos, Greece
This email address is being protected from spambots. You need JavaScript enabled to view it.