The 3D ultra-high-resolution world that is captured by the visual system is sensed, processed and transferred through a dense network of tiny cells, called neurons. An understanding of neuronal communication has the potential to open new horizons for the development of ground-breaking image and video compression systems. A recently proposed neuro-inspired compression system promises to change the framework of the current state-of-the-art compression algorithms.

Over the last decade, the technological development of cameras and multimedia devices has increased dramatically to meet societal needs. The significant progress of these technologies has ushered in the big data era, accompanied by serious challenges, including the tremendous increase in volume and variety of measurements. Although most big data challenges are being addressed with paradigm shifts in machine learning (ML) technologies, where a limited set of observations and associated annotations are utilised for training models to automatically extract knowledge from raw data, little has been done about the disruptive upgrade of storage efficiency and compression capacity of existing algorithms.

The BRIEFING project [L1] aims to mimic the intelligence of the brain in terms of compression. The research is inspired by the great capacity of the visual system to process and encode visual information in an energy-efficient and very compact yet informative code, which is propagated to the visual cortex where the final decisions are made.

If one considers the visual system as a mechanism that processes the visual stimulus, it seems an intelligent and very efficient model to mimic. Indeed, the visual system consumes low power, it deals with high resolution dynamic signals (109 bits per second) and it transforms and encodes the visual stimulus in a dynamic way far beyond the current compression standards. During recent decades, there has been significant research into understanding how the visual system works, the structure and the role of each layer and individual cell that lies along the visual pathway, and how the huge volume of visual information is propagated and compacted through the nerve cells before reaching the visual cortex. Some very interesting models that approximate neural behaviour have been widely used for image processing applications, including compression. The biggest challenge however, is that the brain uses the neural code to learn, analyse and make decisions without reconstructing the input visual stimulus.

There are several proven benefits to applying neuroscience models to compression architectures. We developed a neuro-inspired compression mechanism by using the Leaky Integrate-an-Fire (LIF) model, which is considered to be the simplest model that approximates neuronal activity, in order to transform an image into a code of spikes [1]. The great advantage of the LIF model is that the code of spikes is generated as time evolves, in a dynamic manner. An intuitive explanation for the origin of this performance is that the longer the visual stimulus exists in front of a viewer, the better it is perceived. Similarly, the longer the LIF model is allowed to produce spikes, the more robust is the code. This behaviour is far beyond the state-of-the-art image and video compression architectures that process and encode the visual stimulus immediately and simultaneously without considering any time parameters. However, taking advantage of the time is very important, especially when considering a video stream that is a sequence of images each of which exists for a given time.

Figure 1: An illustration of the neuro-inspired compression mechanism that enables efficient reduction of the number of bits required to store an input image using the Leaky Integrate-and-Fire (LIF) model as an approximation of the neuronal spiking activity. According to this ground-breaking architecture, an input image can be transformed into a sequence of spikes which are utilised to store and/or transmit the signal. The interpretation of the spike sequence based on signal processing techniques leads to high reconstruction quality results. 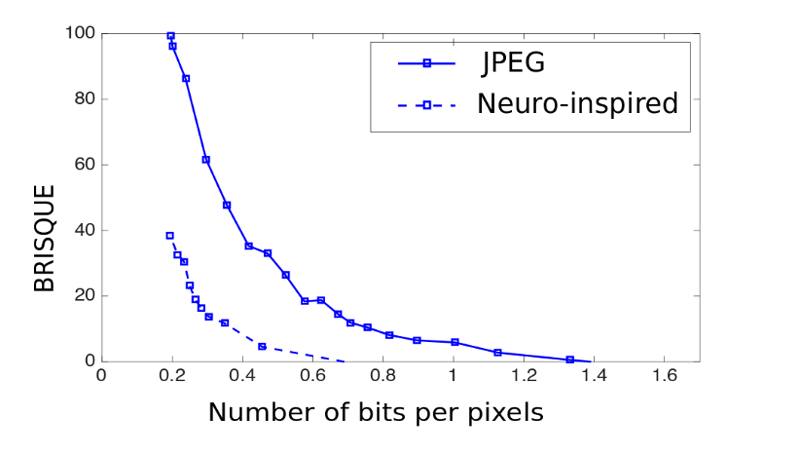 Another interesting aspect is that a neuro-inspired compression mechanism can preserve important features in order to characterise the content of the visual scene. These features are necessary for several image analysis tasks, such as object detection and/or classification. When the memory capacity or the bandwidth of the communication channel are limited it is very important to transmit the most meaningful information. In other words, one needs to find the best trade-off between the compression ratio and the image quality (rate-distortion). We have proven that neuro-inspired compression is much more valuable than the state-of-the-art such as JPEG and/or JPEG2000, which both cause drastic changes in these features [2]. More specifically, we evaluated the aforementioned models using the BRISQUE algorithm [3], a convolutional neural network that has been pre-trained in order to recognise natural characteristics within the visual scene. As a first step, we compressed a group of images with the same compression ratio using both the neuro-inspired mechanism and the JPEG standard. Then, we fed the CNN with the compressed images and we observed that it was able to detect far more natural characteristics within images that had been compressed by the neuro-inspired mechanism than JPEG standard.
This project, funded by the French Government within the framework of the “Make Our Planet Green Again” call, is a collaboration between the Institute of Compute Science (ICS) at Foundation for Research and Technology – Hellas (FORTH) and the Laboratory of Informatics, Signals and Systems Sophia Antipolis (I3S) at French National Centre for Scientific Research (CNRS).

Please contact:
Effrosyni Doutsi
ICS-FORTH, Greece
This email address is being protected from spambots. You need JavaScript enabled to view it.