by Steve Furber (The University of Manchester)

SpiNNaker – a Spiking Neural Network Architecture – is the world’s largest neuromorphic computing system. The machine incorporates over a million ARM processors that are connected through a novel communications fabric to support large-scale models of brain regions that operate in biological real time, with the goal of contributing to the scientific Grand Challenge to understand the principles of operation of the brain as an information processing system.

SpiNNaker is one of two neuromorphic computing systems offering an open service under the auspices of the EU Flagship Human Brain Project (HBP) as part of the EBRAINS research infrastructure [L1] – the other being the BrainScaleS machine developed by the University of Heidelberg in Germany. The machine has been 20 years in conception and 15 years in construction at the University of Manchester, UK, and has been supporting a service with a half-million core system since April 2016, upgraded to the full million cores since November 2018. Around 100 additional small SpiNNaker systems have been deployed in research labs around the world. 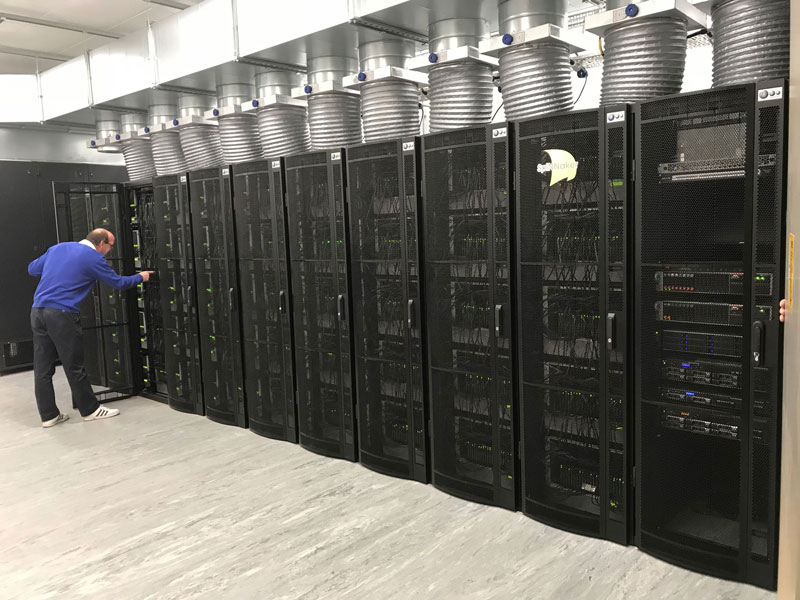 Figure 1: The million-core SpiNNaker machine at Manchester. The machine occupies 10 rack cabinets, each with 120 SpiNNaker boards, power supplies, cooling and network switches. The 11th cabinet on the right contains servers that support configuration software and remote access to the machine.

In many ways SpiNNaker resembles a massively-parallel high-performance computer (HPC), with two exceptions: (i) the processors used on SpiNNaker are small, efficient cores intended for embedded applications rather than the high-end powerful numerical processors used in HPC, and (ii) the communications fabric on SpiNNaker is optimised for carrying large numbers of small packets (where each packet conveys a neuron “spike”) to many destinations, whereas HPC systems are optimised for large, fast data movements between two cores. The SpiNNaker communications architecture is very much motivated by the very high degree of connectivity found between neurons in the brain, where each neuron typically connects to many thousands of other neurons.

User access to SpiNNaker is typically mediated through the PyNN (Python Neural Networks) language, which is supported by a number of simulators, so models can be developed on any computer or laptop and then run on SpiNNaker, either through a web-based batch mode interface or using a Jupyter notebook. For real-time robot control it is generally necessary to have a SpiNNaker system collocated with the robot, though the host server in Manchester supports the HBP Neurorobotics platform for virtual neurorobotic control simulation.

Examples of brain models successfully run on the machine include a cortical microcircuit [1], where SpiNNaker was the first machine to achieve real time, and a hybrid model of the auditory system [2]. Further models are being developed in collaboration with partners within the HBP.

Even with a million processor cores, SpiNNaker cannot model systems approaching the scale of the full human brain with its (just under) one hundred billion neurons and several hundred trillion synapses, but it could potentially support models of the scale of the mouse brain, which is about a thousand times smaller than the human brain. However, biological data is relatively sparse, and putting together a full brain model even of an insect’s brain, which is a hundred to a thousand times smaller than a mouse brain, involves interpretation of, and extrapolation from, the available data, combined with more than a little guesswork! So progress towards a reasonably coherent description of information processing in the brain will be a long, slow haul, requiring diligent work from practical and theoretical neuroscientists, advances in brain imaging, and contributions from many other disciplines. SpiNNaker offers a platform for testing theories and hypotheses at scale as they emerge from such work, and also for investigating how concepts from brain science can be translated into advances in artificial intelligence with applications in the commercial domain.

The technology employed in the current SpiNNaker machine is now 10 years old, and its successor has been under development within the HBP as a collaboration between the University of Manchester and the Technical University of Dresden. SpiNNaker2 will be fabricated in 2021 and will deliver an order of magnitude increase in functional density and energy efficiency, taking SpiNNaker forward into its third decade, but with an increased emphasis on commercial applications alongside brain science.

The first 20 years of the SpiNNaker project have been documented in an Open Access book [3], including details of a number of applications and the current state of development of SpiNNaker2.

Please contact:
Steve Furber
The University of Manchester, UK
This email address is being protected from spambots. You need JavaScript enabled to view it.