Scientific groups in industry and academia have made enormous progress in the implementation of first quantum computer prototypes. IBM’s quantum experience with five and 16 qubits are already publicly accessible in the cloud. Three “standard” software interfaces are available. Client systems with 20 qubits ready for use and the next-generation IBM Q system is in development with the first working 50 qubit processor.

Quantum computers are expected to solve problems which are intractable to classical information processing. Built on the principles of quantum mechanics, they exploit the complex and fascinating laws of nature at the molecular and atomic level, which usually remain hidden from view. By harnessing this quantum behaviour, quantum computing can run new types of algorithms to process information in extremely large state spaces. These algorithms may one day lead to revolutionary breakthroughs in materials simulation, the optimisation of complex manmade systems, and in machine learning.

Quantum computers are based on qubits, which operate according to two key principles of quantum physics: superposition and entanglement. Superposition means that each qubit can represent both a “1” and a “0” at the same time [1]. It leads to what is called “quantum parallelism”, an effect that allows an n-qubit register to store all 2n possible states at the same time. Entanglement means that the state of multiple qubits can be correlated with each other; that is, the state of one qubit (whether it is a “1” or a “0”) depends on the state of one or more other qubits and the qubit can no longer be described separately. Using the principle of entanglement creates additional processing capabilities which are not available on classical processors.

IBM’s quantum devices are built on superconducting Josephson junction technology which requires cryogenic temperatures as depicted in Figure 1. The quantum bits are anharmonic LC resonators, known as transmon qubits [2], where the non-linear inductor (L) is implemented by a Josephson junction. The left outer device in Figure 2 shows five square shaped qubits (a). The meandering connections (b) are coplanar waveguides (CPW). They are used to couple qubits with each other for information processing and to couple qubits to I/O ports (c) to manipulate, write and read the qubits. All the qubit manipulations and readout processes are controlled by microwave pulses in the range of 4 to 8 GHz. 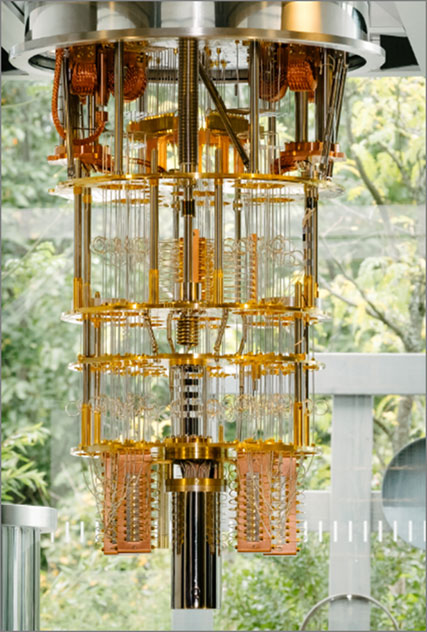 Figure 1: Open cryogenic system for a 50 qubit quantum computing device. The device is hidden inside the shielding tube attached at bottom center. The copper structures to the left and right of the shielding tube contain parametric quantum amplifiers to readout information from the qubits.

The “IBM Q experience” provides a platform to explore basic quantum circuits on real quantum devices as shown in Figure 2 (left and middle). Currently, 5-qubit and 16-qubit devices are publicly available to run user programs from the cloud. Alternatively, a cloud-based simulator software which handles up to 20 qubits can be chosen. Examples of the three different programming interfaces are depicted in Figure 3. The graphical user interface is the simplest way to access the real quantum hardware using a web browser. OpenQASM [3] is a low level hardware interface which enables compatible software stacks to be built. For more advanced developments, the Quantum Information Software Kit (QISKit) is an open-access programing interface which provides highest functionality for working with both, the real quantum processors and various software based quantum simulators. The open-access interface allows a user-application to integrate the quantum processor as an accelerator, through the cloud.

Figure 2: An experimental 5-qubit (left) and 16-qubit (mid) device as used in the publicly available “IBM Q experience” and a package as used for the upcoming 20/50 qubit devices (right). For further details see text. 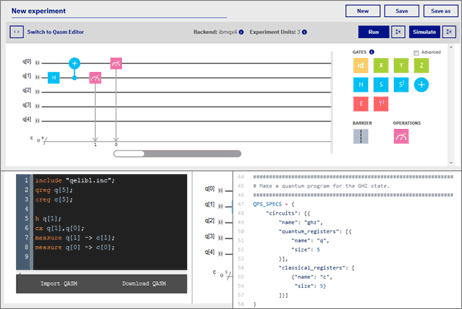 On the application side, calculations of e.g., the ground state energies of small molecules such as H2, LiH and BeH2 have been reported. Further examples are shown in the links given below. The “IBM Q experience” provides a platform to explore basic quantum circuits on real quantum processors based on superconducting qubits. It has been used by more than 60,000 users and has already generated more than 35 third-party research publications on applications of quantum computing. On the software side, a growing number of developers are using QISKit. To summarise, the time is now to join forces, execute and continue to make key breakthroughs on this revolutionary journey of information technology.

Please contact:
Peter Mueller
IBM Research – Zurich, Switzerland
This email address is being protected from spambots. You need JavaScript enabled to view it.