Photonic quantum computers promise compact, user-friendly packaging. The building blocks of such an implementation comprise of sources for efficient production of photons with high purity. To increase the clock speed of the computation, such sources need to operate in the GHz range.

Although the current favourites for a scalable quantum computer seem to be super-conducting qubit implementations, a pure photonic-based solution should not be disregarded, since it offers room temperature operation and small footprints. As the standard approach to quantum computing is based on the quantum circuit model, a generalisation of the classical circuit, featuring logical operations such as AND and XOR gates, single-qubit gates (e.g. rotations) and two-qubit gates (e.g. controlled-NOT) are required for universal quantum computing. This quantum circuit model is not very well suited to a photonic implementation, since the photon-photon interaction is negligible and a two-photon gate is hence not feasible.

Cluster state computing
A scalable model for photonic quantum computation is the so called one-way or measurement based quantum computer [2]. In this approach, the actual computation proceeds by single qubit measurements only, on a large entangled resource state (cluster state). In a photonic implementation, the cluster state is a set of large numbers of photons, which are entangled to each nearest neighbour. The advantage lies in the fact, that there is no difference between performing a single-qubit or two-qubit gate operation. In both cases, there will be only measurements on single photons, a feat easy to achieve.
The main challenge lies of course in the creation of the entangled cluster state which sounds like a taunting task, especially for large states of several hundreds of qubits. Fortunately, it can be shown that heralded photon sources suffice to build a cluster state of any size. Of course efficiencies have to be increased and losses minimised, but in general, multiplexing a large number of such sources together will produce the necessary entangled state. One key issue is that the photons produced must be indistinguishable, i.e. they must look all the same.  Therefore, no correlations in frequency, time or spatial modes are allowed between the photons. The figure of merit for this property is the purity, photons that are completely uncorrelated have a high purity whereas photons which correlate in a degree of freedom show a low purity. Figure 1 illustrates the absence of frequency correlation between two generated single photons. 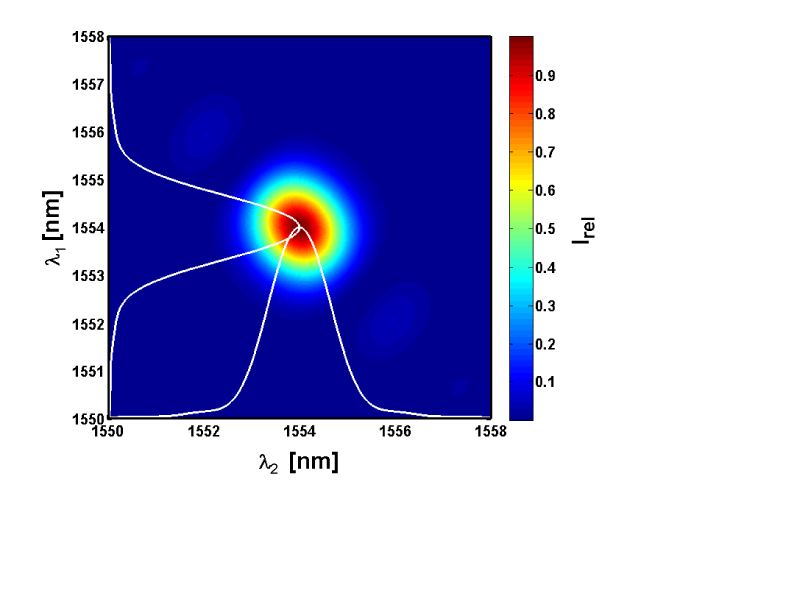 Figure 1: Frequency correlation plot (joint spectral intensity) between the photons of the generated pair. The nearly circular distribution indicates a low degree of correlations; in contrast a more elongated spectral distribution would point to a low purity of the photons.

The GHz entanglement source
The AIT-Austrian Institute of Technology in Vienna successfully developed a source for polarisation-entangled photon pairs which can be operated at a tunable repetition rate of up to 40 GHz to be used in cluster state generation [3]. Our source is based on a Sagnac-interferometer, where a nonlinear optical medium is pumped by two pulsed laser beams from two diametrically opposed directions. By virtue of a nonlinear process called parametric downconversion (PDC), some of the laser photons would decay within the crystal and give birth to two photons with half the energy each. Entanglement emerges from the lost “which-way information” after recombination of the two paths: There is no possible way to tell which pump beam produced the twin photons; therefore the two possible origins exist at the same time in a quantum superposition, as shown in Figure 2. The photons are generated with high purity and are highly entangled (95%). 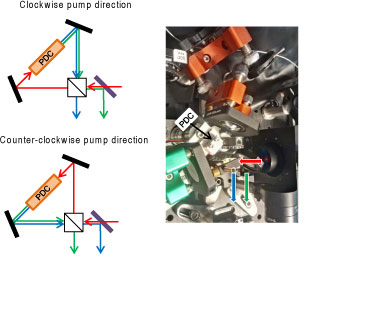 Figure 2: Left: Principle of entanglement generation. Depending on the path of the pump laser (red), the vertical (green) and horizontal (blue) photons are exiting at different ports; Right: Experimental setup of Sagnac interferometer, the red pump beam enters from the right side.

Outlook
In the next step, we will simultaneously pump three Sagnac-interferometers (instead of one) in order to generate larger cluster states. Moreover, we will replace our avalanche photo diodes by superconducting nanowire detectors which not only have significantly higher detection efficiency but also operate at a higher time resolution. This will allow us to generate cluster states close to the maximal pulse rate of the laser at 40 GHz. While enlarging the number of photons in the cluster state, we will also strive to reduce the overall size of the experiment using photonic integration techniques.

Acknowledgements
This work was funded by the Austrian Research Promotion Agency (Österreichische Forschungsförderungsgesell-schaft, FFG) through the project KVQ (No. 4642983).