Vehicular-to-vehicular (V2V) communications requires a reliable information interchange system. However, in a three-dimensional environment, inevitable obstructions (e.g., road topology and buildings) need to be considered in order to design data forwarding schemes. As one approach, Vehicle-to-Vehicle Urban Network (V2VUNet) introduces Vertical Relative Angle (VRA) as one of the significant factors in the case of a three-dimensional environment.  VRA locates a participating vehicle’s coordinates more precisely, when its position cannot be calculated based only on distance. Therefore, the increased location precision leads to several forwarding algorithms (e.g., prediction mobility and transmission area efficiency), which are expected to overcome frequent topology changes and re-routing.

The demand for reliable Vehicular-to-vehicular (V2V) communication increases on a daily basis [1]. V2V communication, as part of a Vehicular Ad hoc Network (VANET), offers advantages for safety (e.g., automatic braking system and traffic accident information) and non-safety applications (e.g., business and entertainment). V2V communication becomes interesting due to its flexibility to connect to other participating vehicles without any Road Side Unit (RSU) infrastructure. Additionally, V2V is a promising approach to extend the scalability issue due to high mobility behaviour and complex city environments.

Because of the high mobility behaviour of V2V, frequent disconnection of communication occurs due to overpasses, tunnels, and other obstructions leading to unstable routing issues for transmitted packets. Evaluating this unstable routing can be done by investigating short lifetime connections, low packet delivery ratio (PDR), and end-to-end (e2e) delays that are all highly influenced by the road topology. Therefore, the road topology impacts connection and re-connection establishment between vehicles. The road topology in a two-dimensional scenario, i.e., a road with intersections, and in a three-dimensional scenario, i.e., a road with overpasses, requires special calculations.

Vehicular-to-Vehicular Urban Network
Existing urban environments challenge the connectivity for V2V. Overcoming this challenge, the developed Vehicle-to-Vehicle Urban Network (V2VUNet) concept offers an optimisation for transmission between vehicles by selecting (1) the proper message route and (2) the best relay candidate in the network. Instead of using a flooding mechanism in route path establishment, the area of route request transmission is restricted by measuring the relative angles [2]. The Horizontal Relative Angle (HRA) is applied when the forwarding mechanism occurs in a two-dimensional environment and the Vertical Relative Angle (VRA) is applied in a three-dimensional environment to restrict the area for possible next relay candidates. This area restriction algorithm minimises the required time to build a complete route, which frequently changes, by broadcasting the route request to the closest vehicle (the relay candidate). Figure 1a shows the area restriction algorithms. The resulting number of relay candidates is now limited but still the best one has not been selected. Thus, the predictive forwarding al gorithm shown in Figure 1b is performed. It performs a more precise calculation with additional weight values θx and θz to select the best relay candidate. As an overall result the V2VUNet concept allows the lowest value HRA and VRA to be determined to find the best relay candidate by restricting the area of candidate searching and by maintaining the direction homogeneity assuming a scenario as shown in Figure 1c. 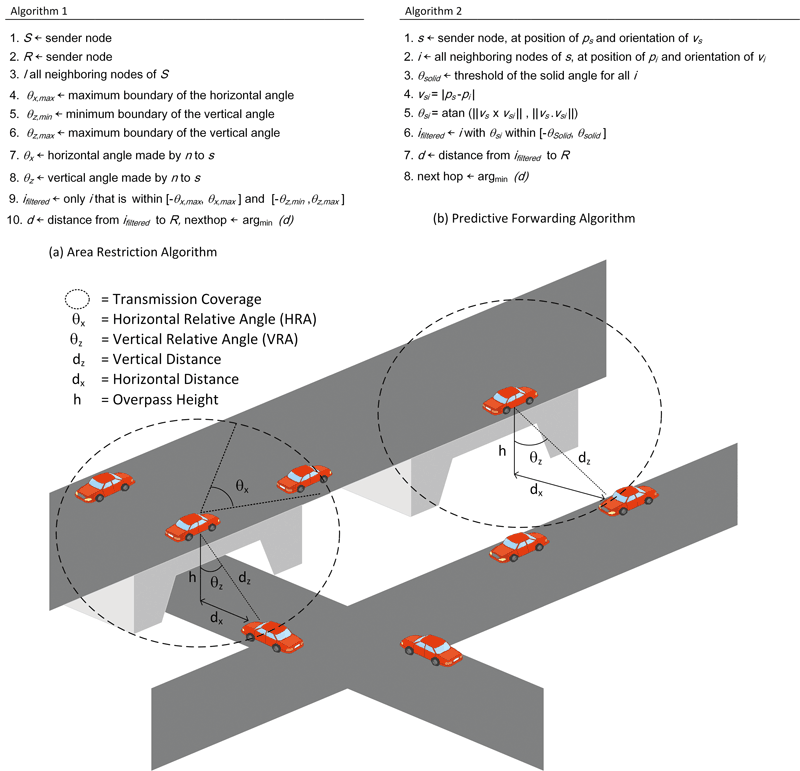 Conclusions
The V2VUNet concept supports two algorithms for link path stability and successful transmission, namely area restriction and predictive forwarding, including HRA or VRA as the weight values implemented in the forwarding decision. The goal of the proposed concept is to locate the best next relay candidate in the network to forward the message.

V2VUNet was implemented in two- and three-dimensional environments with obstructions. The HRA and VRA are introduced to distinguish the ‘real’ transmission distance between two vehicles on different road levels. The area restriction and predictive forwarding algorithms emphasize the height of the road topology and direction homogeneity. Current evaluation showed V2VUNet overcomes the frequent disconnection and three-dimensional road topology issues and improves the transmission ratio by around 25% compared to the general V2V transmission rate that is less than 50% [3].

Future work foresees investigations for data dissemination for variable data rates and higher data size. The variable data rate will be tested to evaluate the link lifetime when the vehicle’s direction is homogeneous, meaning the sender and receiver have the same driving direction. The higher data size transmission will be applied to obtain a non-safety application, since such application demands a massive data scale.

This work was supported in part by the Ministry of Research, Technology and Higher Education of the Republic of Indonesia.