Neurodegenerative diseases, such as Alzheimer’s and Parkinson’s disease, are complex multi-faceted disorders involving a mosaic of alterations that can be measured in the brain of living patients thanks to the tremendous progresses of neuroimaging. A major challenge for computational imaging is to build efficient and meaningful models of disease from multimodal imaging datasets in order to better understand diseases, improve diagnosis and develop precision medicine.

The continuous progress of medical imaging is offering us an increasingly complete picture of brain alterations. Anatomical magnetic resonance imaging (MRI) assesses the integrity of anatomical structures. Diffusion MRI allows the connections between distant brain areas to be mapped in vivo. Functional imaging (functional MRI, electro- and magneto-encephalography) maps neuronal activity. Positron emission tomography (PET) provides information about specific cellular and molecular processes. In recent years, large datasets of patients with multiple imaging modalities and long-term longitudinal follow-up have been gathered. The current challenge is to use these large multimodal datasets to learnmodels of neurodegenerative disease and computer-assisted diagnosis, prognosis and stratification tools.

ARAMIS [L1] is a multidisciplinary research team including computer scientists, specialised in computational imaging and statistical learning, and physicians who specialise in neurodegenerative diseases. It belongs to the Brain and Spine Institute (ICM) [L2], a major research centre on neurological diseases located with the Pitié-Salpêtrière hospital in Paris, the largest adult hospital in Europe, and is jointly affiliated with Inria, CNRS, Inserm (national institute of health) and Sorbonne Universités. ARAMIS aims to build models of neurodegenerative diseases from multimodal brain images. In this paper, we briefly present our most recent results and current projects: 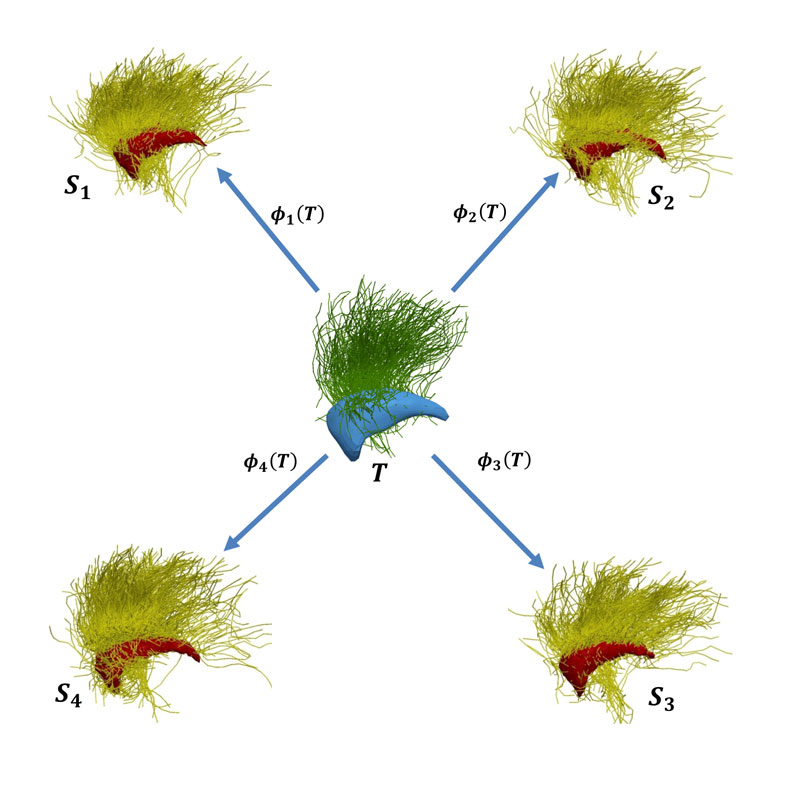 Figure 1: Modelling of brain structure. An average model (called template, denoted as T) is estimated from a population of subjects Si. Each subject is seen as the deformation Φi(T) of the template. The model includes both grey matter structures (surfaces extracted from anatomical MRI) and white matter tracks (curves extracted from diffusion MRI). For the sake of visualisation, only one surface and a set of curves are displayed in the figure. 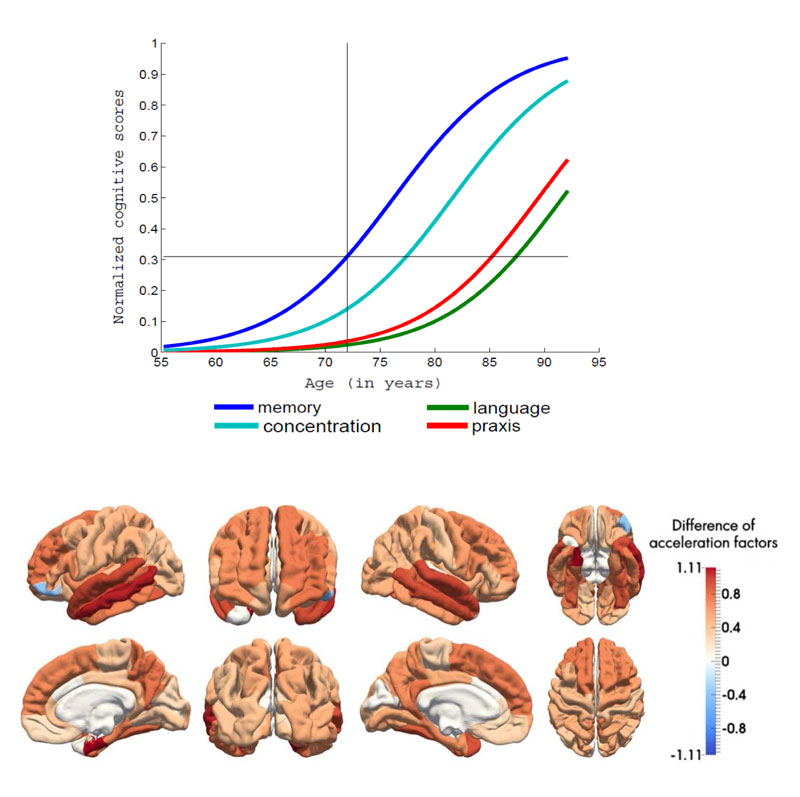 Figure 2: Estimation of disease progression models from a longitudinal dataset of patients with Alzheimer’s disease. Upper panel: average trajectories of data change for a set of cognitive measures. The model allows to infer which types of cognitive deficits occur first. Lower panel: differences of pace of atrophy (extracted from anatomical MRI) between patients with Alzheimer’s disease and healthy controls. This unveils brain regions in which the degenerative process is the more rapid.

Current projects include the definition of network models of temporal progression, the integration of functional imaging (fMRI, PET, EEG/MEG) together with models of brain structure and the design of computer-aided diagnosis and prognosis systems. We are also strongly involved in clinical research studies in different neurodegenerative disorders (Alzheimer’s disease, frontotemporal dementia, primary progressive aphasia) to demonstrate the medical relevance of the developed models. Ultimately, these models should pave the way to digital precision medicine, in which medical decisions can be informed by numerical models personalised to each patient.

Please contact:
Olivier Colliot
CNRS, France
This email address is being protected from spambots. You need JavaScript enabled to view it.