The winner of the first edition of the Minerva Informatics Equality Award is the Computer Science Department at University College London (UCL), UK, for its comprehensive gender policy, the diversity of initiatives put in place as well as the strong evidence of positive impact.

Minerva 2016 edition
This year’s edition of the Minerva Informatics Equality Award focused on gender equality initiatives and policies that help develop the careers of female faculty. The Award, organised by Informatics Europe and sponsored by Google, was presented at a special ceremony held in Budapest, Hungary, during the 2016 European Computer Science Summit. Dr Alexandra Silva accepted the Award on behalf of UCL and presented the scope and impact of their initiative.

Three years ago, the Computer Science Department at UCL started the ADVANCE initiative to increase the number of female lecturers and achieve subsequent promotions through the ranks. ADVANCE was led by Dr Ivana Drobnjak and Professor John Shawe-Taylor. It is part of the department’s wider Athena Swan initiative, motivated by the UK Athena Swan Charter established in 2005 to encourage and recognize commitment to advancing the careers of women in STEMM disciplines (Science, Technology, Engineering, Mathematics and Medicine). 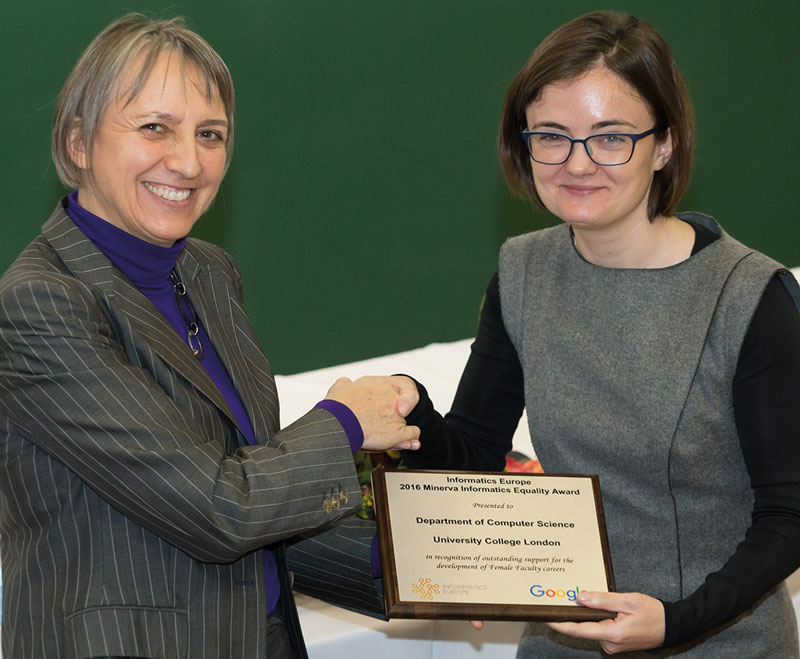 To help women move from a research career into an academic one, a structured programme for career progression was put in place that focuses in particular on the transition from contract research positions to permanent lectureships. Further actions under the ADVANCE initiative support women once they are on the academic track, addressing life-work balance issues, improving promotion procedures, organising awareness training for all staff, as well as providing support for informal networking and mentoring. The appointment and promotion figures for female staff at the Computer Science Department at UCL provide clear evidence of the positive impact of the measures adopted. One of the key reasons for the success of the ADVANCE initiative was the strong support of the Head of the Department, Professor John Shawe-Taylor.

“The Computer Science Department at UCL is to be congratulated for its strong commitment and comprehensive approach to gender equality,” comments Micheline Beaulieu, Emeritus Professor of Information Science, University of Sheffield, UK and Chair of the Award Committee. “They implemented several effective strategies which are far reaching and provide a model of sustainable good practice.”

John Shawe-Taylor adds: “I am very proud of this achievement of our department. Our committed Athena Swan team works very hard towards implementing strategies to remove obstacles in the path of women’s careers in computer science disciplines. My personal involvement in the process has been extremely gratifying and I am very pleased to see the progress we have made. Women have already made huge contributions to computing: in the case of Ada Lovelace it could be argued founding the field. The fact that women have been reluctant to follow this career has cost the discipline dear in terms of missed opportunities and talent. Led by our Athena Swan Champions Dr Ivana Drobnjak and Dr Alexandra Silva, our efforts now are very much focused on providing training and mentoring to other departments and universities, and I am very much looking forward to the interesting work awaiting in the future.”

The winner was selected by a prominent team of international experts in an evaluation process that ran from May to August 2016.

About the Minerva Informatics Equality Award
The Minerva Informatics Equality Award, organised by Informatics Europe, recognizes best practices in departments or faculties of European universities and research labs that encourage and support the careers of women in Informatics research and education. On a three-year cycle, the award focuses each year on a different stage of the career pipeline: developing the careers of female faculty; supporting the transition for PhD and postdoctoral researchers into faculty positions; and encouraging female students to enroll in Computer Science/Informatics programmes and retaining them.