Microwave tomography is a novel imaging modality holding great promise for medical applications and in particular for brain stroke diagnosis. We demonstrated on synthetic data the feasibility of a microwave imaging technique for the characterisation and monitoring of strokes. Using high performance computing, we are able to obtain a tomographic reconstruction of the brain in less than two minutes.

Stroke, or cerebrovascular accident (CVA), is classically characterised as a neurological deficit attributed to an acute focal injury of the central nervous system by a vascular cause, and is a major cause of disability and death worldwide. About 85% of CVAs are ischemic due to cerebral infarction, caused by an interruption of the blood supply to some part of the brain, and 15% are haemorrhagic. Differentiating between ischemic and haemorrhagic CVAs is an essential part of the initial workup of the patient, and rapid and accurate diagnosis is crucial for patient survival; here, neuroimaging plays a vital role. Computed Tomography (CT) and Magnetic Resonance Imaging (MRI) are the ‘gold’ standards, but their use is not well suited to efficient medical care of CVAS, as they are bulky diagnostic instruments and cannot be used in continuous brain monitoring. A non-invasive and transportable/portable device for the characterisation and monitoring of CVAs would have clear clinical applications, beginning with the very first instance of patient care in an ambulance and extending to continuous patient monitoring at the hospital.

Microwave tomography is a novel imaging modality with a large number of potential attractive medical applications, and is based on the difference between the dielectric properties of normal and diseased brain tissues. Microwave tomography features rapid data acquisition time, and together with rapid tomographic reconstructions allows detecting, identifying and monitoring CVA continuously (head tissues are exposed to low-level microwave incident field).

From a computational point of view, microwave imaging requires the solution of an inverse problem based on a minimisation algorithm. Reconstruction algorithms are computationally intensive with successive solutions of the forward problem needing efficient numerical modelling and high-performance parallel computing. The raw data acquired by the microwave imaging system can be wirelessly transferred to a remote computing center, where the tomographic images will be computed. The images can then be quickly transferred to the hospital (see Figure 1). This methodology involves distinct research fields: optimisation, inverse problems, approximation and solution methods for the simulation of the forward problem modelled by Maxwell’s equations. The latter is challenging in itself as the modelling must accurately take account of the high heterogeneity and complexity of the different head tissues.

Our work demonstrates on synthetic data the feasibility of a microwave imaging technique for the characterisation of CVAs, and won our research team the Bull-Joseph Fourier Prize in 2015. The numerical framework is based on high-performance computing open-source tools developed by our research team: the HPDDM library [1] (L1) is an efficient parallel implementation of Domain Decomposition Methods (DDM) and is interfaced with the finite element software FreeFem++[2](L2). Our work was carried out in collaboration with EMTensor, an Austrian innovative SME dedicated to biomedical imaging and is based on their BRain IMaging Generation1 (BRIMG1) prototype [3]. EMTensor™’s experimental system consists of an electromagnetic reverberating chamber surrounded by 160 antennas, able to work alternately as emitters or receivers (see Figure 2). The measurements are gathered in the scattering matrix, which is the input of the reconstruction algorithm. We first validated the forward problem by comparing the experimental data with the simulation. 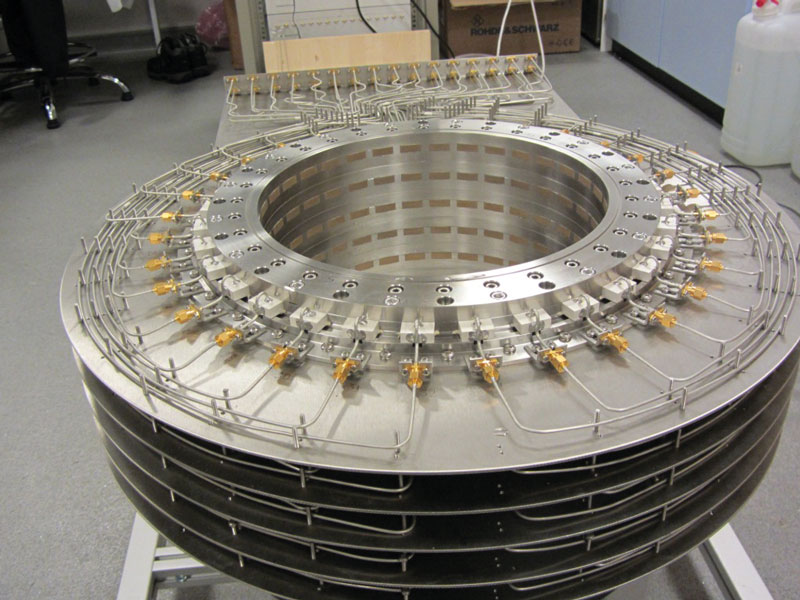 We then created synthetic data corresponding to an accurate numerical model of a human head with a simulated haemorrhagic CVA as input for the inverse problem.  We designed and tested our inversion algorithm for monitoring the evolution of the CVA, using synthetic data corrupted with 10% white Gaussian noise. Our scalable algorithm uses multiple levels of parallelism, which allows us to reconstruct an image of the brain in 94 seconds using 4,096 cores. Figure 3 shows the reconstructed images for three evolution steps of the haemorrhagic CVA. The reconstruction time, which can be further refined, already fits the physicians’ objective to obtain an image every fifteen minutes for efficient monitoring. 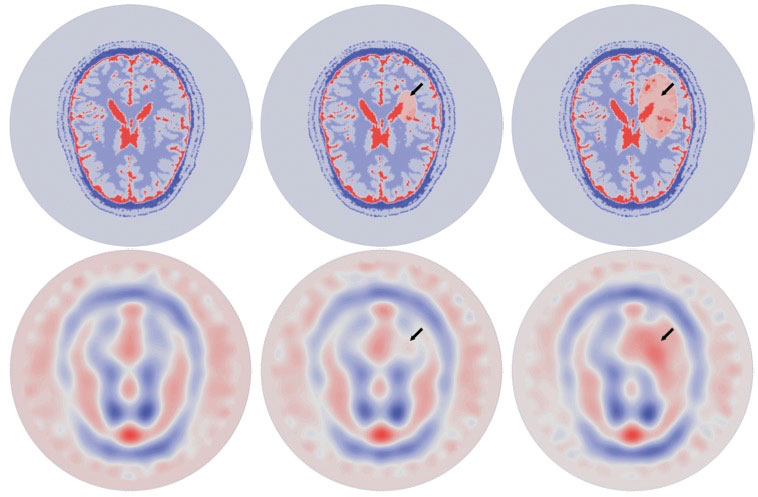 The medical and industrial challenge of this work cannot be emphasised enough. It is the first time that such a realistic study has demonstrated the feasibility of microwave imaging. Although the technique is less precise than MRI or CT scans, its low price, reduced size, and lack of adverse effects even with continuous use could make microwave imaging of the brain the equivalent of echography (ultrasound imaging) on other parts of the human body.

This work was granted access to the HPC resources of TGCC@CEA under the allocations 2016-067519 and 2016- 067730 made by GENCI. Authors would like to thank the French National Research Agency (ANR) for their support via the MEDIMAX grant whose PI is C. Pichot (LEAT, CNRS, France).

Please contact:
Pierre-Henri Tournier
LJLL, UPMC, Inria (Alpines team) and CNRS
This email address is being protected from spambots. You need JavaScript enabled to view it.