Embedded devices are increasingly connected to the Internet to provide new and innovative applications in many domains. However, these IoT devices can also contain security vulnerabilities, which allow attackers to compromise them using malware. We report on our recent work on using machine learning for efficient and effective malware detection on resource-constrained IoT devices.

Embedded devices connected to the Internet are threatened by malicious programs (viruses, worms, also known as malware). One of the most infamous examples for IoT malware is Mirai, which infected hundreds of thousands of IoT devices and launched the largest distributed denial-of-service attack against Internet-based services in 2016, but the IoT threat landscape includes many other malware families as well.

Anti-virus products developed for traditional IT systems have higher resource needs than those offered by embedded IoT devices. The required amount of free storage space and memory to run these products is often measured in gigabytes, which exceeds the capacity of typical IoT devices, such as WiFi routers, IP cameras, smart household appliances, and wearable devices. In addition, many existing anti-virus products do not even support the operating systems used on IoT devices. Therefore, they could not be installed, even if a particular IoT device met their system requirements.

Hence, in our projects (MILAB [L1] and SETIT [L2]), we work on new machine learning-based malware detection methods tailored for resource-constrained IoT devices. In a recent paper [2], we have proposed SIMBIoTA (SIMilarity Based IoT Antivirus), an effective and efficient anti-virus solution for such devices. The operating principles of SIMBIoTA are similar to those of traditional signature-based anti-virus solutions, but SIMBIoTA uses TLSH hash values of known malware instead of raw binary signatures for detection purposes. TLSH is a similarity hash algorithm, and it is different from cryptographic hashes: similar inputs result in similar TLSH hash values, and SIMBIoTA takes advantage of this feature. More specifically, embedded IoT devices that use SIMBIoTA store only a few TLSH hash values of known malware, and they compare the TLSH hash value of new files to these stored hashes. If the TLSH hash of an unknown file is similar to that of a known malware, the unknown file is detected as malware.

We evaluated the detection performance of SIMBIoTA and measured a true positive detection rate of more than 90% on average, even for previously unseen malware samples. Moreover, in the experiments performed, its false positive detection rate was 0%. In terms of resource needs, SIMBIoTA requires just a few tens of kilobytes of storage space, which is certainly available even on resource-constrained IoT devices.

In a follow-up work, we also used TLSH hash values for malware detection on IoT devices, but in a manner different from that of SIMBIoTA. Our key observation is that, thanks to their well-defined structure, TLSH hash values can be used as feature vectors for training machine learning models, which can then be used for malware detection. We call the resulting antivirus solution SIMBIoTA-ML. We showed that this approach can result in interesting trade-offs in terms of detection performance and resource usage on IoT devices. More specifically, SIMBIoTA has lower storage requirements and false positive detection rate than SIMBIoTA-ML, but SIMBIoTA-ML outperforms SIMBIoTA in terms of true positive detection rate, achieving more than 95% on average (see Figure 1). We also showed that SIMBIoTA's database of TLSH hash values increases over time, which has an impact on its detection time. Specifically, the larger the database is, the longer it takes for SIMBIoTA to decide whether an unknown file is malicious or not. By contrast, we showed that SIMBIoTA-ML has a near-constant running time, which allows for better estimation of the delay introduced by the anti-virus solution, and this can be an advantage in case of real-time applications (e.g., cyber-physical systems). In addition, using our DeepWater [3][L3] machine learning framework, we compared the detection performance of SIMBIoTA-ML when used with different machine learning models, and found that the best performance is achieved by the logistic regression model, which also turns out to be the least resource demanding in terms of memory usage and prediction time. 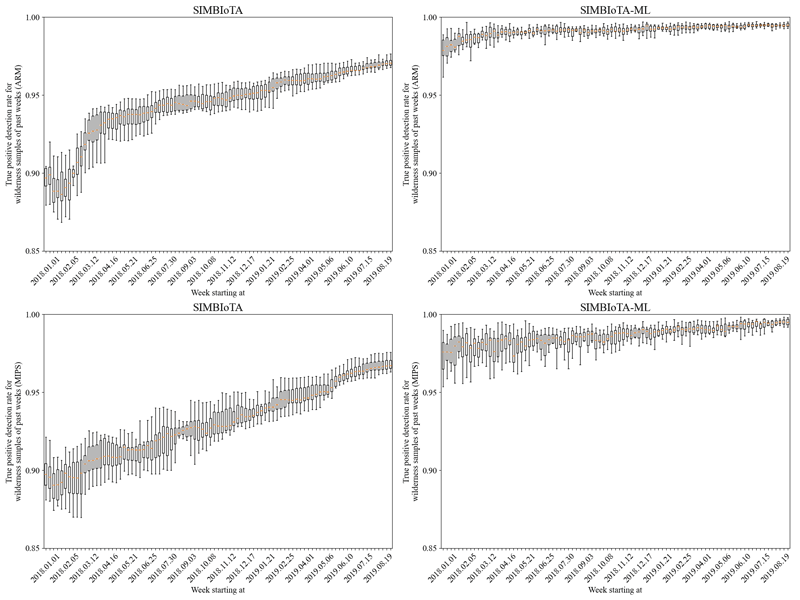 Figure 1: Box plot of the true positive detection rate of SIMBIoTA and SIMBIoTA-ML on ARM and MIPS samples.

We performed all experiments using our IoT malware benchmark dataset called CUBE-MALIoT, which we made public at [L4]. This data set consists of 29,209 malicious samples developed for the ARM platform and 18,715 malicious samples developed for the MIPS platform. To the best of our knowledge, such a large dataset containing raw binaries of IoT malware was not previously available publicly to the research community. We hope that CUBE-MALIoT will become a de facto benchmark dataset in IoT malware detection in order to satisfy the need for the comparability and reproducibility of results of different research groups.

Please contact:
Levente Buttyán
Department of Networked Systems and Services, Budapest University of Technology and Economics, Hungary
This email address is being protected from spambots. You need JavaScript enabled to view it.

Rudolf Ferenc
Department of Software Engineering, University of Szeged, Hungary
This email address is being protected from spambots. You need JavaScript enabled to view it.