The COURAGE project is exploring the methods for cultural opposition in the socialist era (cc. 1950-1990). We are building a database of historic collections, persons, groups, events and sample collection items using a fully linked data solution with data stored in an RDF triple store. The registry will be used to create virtual and real exhibitions and learning material, and will also serve as a basis for further narratives and digital humanities (DH) research.

COURAGE addresses the role of the collections in defining what “cultural opposition” means in order to facilitate a better understanding of how dissent and criticism were possible in the former socialist regimes of Eastern Europe. The type of opposition we want to discover was largely evident in the culture and lifestyle under the socialist era, and include activities such as alternative music, alternative fine arts, folk dance clubs and religious movements. The COURAGE project [1] [L1] (within the EU H2020 framework) is creating a comprehensive online database (digital registry) of existing but scattered collections on the histories and forms of cultural opposition in the former socialist countries, thereby making them more accessible. It will analyse these collections in their broader social, political and cultural contexts. The general aim of this analysis is to allow for the expanded outreach and increased impact of the collections by assessing the historical origins and legacies of various forms of cultural opposition. Our research team aims to explore the genesis and trajectories of private and public collections on cultural opposition movements, the political and social roles and uses of the collections before 1989 and since, the role of exiles in supporting these collections, etc.

The project team contains institutes or faculties of history or sociology from Bulgaria, Croatia, Czech Republic, Germany, Hungary, Ireland, Lithuania, Poland, Romania, Slovakia and the United Kingdom. The role of IT support is assigned to MTA SZTAKI, Hungary.

Research results will be made available in multiple forms. The online education material will bring to light the hidden and lesser-known cultural life of the former socialist countries and will facilitate teaching and learning about the period. The exhibition will give access to the hitherto less known masterpieces of cultural opposition as well as the interesting lifestyles of its members through fascinating visual footage and freshly disclosed archival documents. Policy documents will help decision makers and funders to recognise the social impact and use of the collections of cultural opposition, and will provide a forum to discuss projects of common interest. COURAGE will also organise a documentary film festival. We want to encourage younger generations to care about the past, and to appreciate the importance of cultural opposition.

Based on the requirements set by historians and sociologists, MTA SZTAKI installed and customised a linked data platform, where data for all former socialist countries can be entered by researchers involved in the project. The linked data approach was a natural choice given the importance of capturing the connections between all the researched players, events and collections. The linked data approach is not yet widely known and appreciated in the fields of arts and social science, but our researchers quickly realised its advantages and learned about its different way of data representation. The editor team benefits from the easy traversal and grouping of linked entities and the multilingual text handling, while the administrators can very easily extend or change the data model on-the-fly. Editors use the Vitro platform with Jena triple store for editing, which is connected to a set of WordPress portals for public presentation.

Among the many IT challenges, first we had to solve the representation of timed properties, for example when a collection was owned by a person and then donated to a museum. Secondly, we had to implement a kind of simplified authorisation for triple editing (the option “Everything is open” was not acceptable for the community). Thirdly, a quality assurance workflow was also developed in-house. Entities in the registry go through a seven-step workflow containing local and central quality checks and English proofreading. The result is what we can call a knowledge graph connecting collections, events and participants of cultural opposition. Part of this graph is already published and browseable on the project portal under the registry link. The schema of the registry is called the COURAGE Ontology, and it is made available as an OWL file. Owing to our special requirements, we could hardly rely on existing ontologies, but in the future, we aim to map our ontology to various widely used metadata formats.

As our current status in rough numbers, we have 300 collections with 500 featured items, 700 persons, 300 groups or organisations and 400 events in the registry. With 80 researchers editing the registry we are not yet halfway through our planned work. We hope that by the end of the project we can build an almost complete encyclopaedia of cultural opposition in former socialist countries in the form of a knowledge graph. 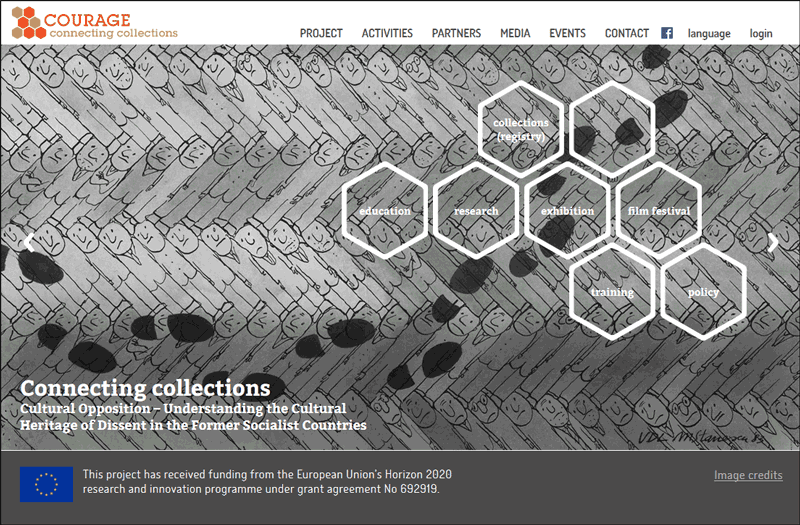 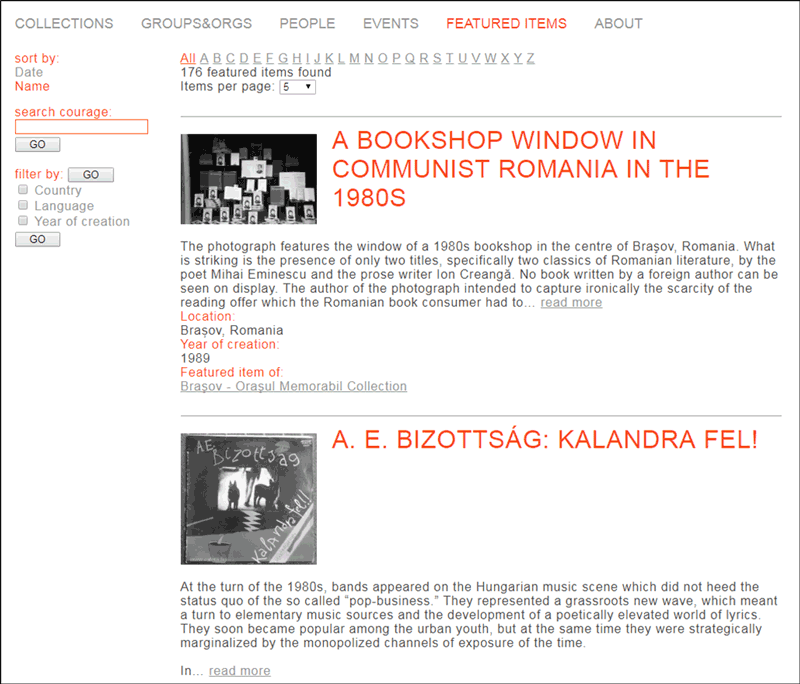 Please contact:
András Micsik
MTA SZTAKI, Hungary
+36 1 279 6248
This email address is being protected from spambots. You need JavaScript enabled to view it.