Methods and technologies for creating photorealistic 3D models have undergone an impressive evolution with a positive impact in the cultural heritage sector. Using widely available standard tools we describe a modelling and simulation pipeline, which generally provides for most visualisation projects with an acceptable trade-off between visual consistency, accuracy and automatism.

The creation of 3D models and the assumed simulation process for cultural heritage applications depends on the individual application requirements and mixed reality presentation method of choice [1, 2]. Primarily these are related to the geometric combined with photometric accuracy of the reconstructed 3D models as well as the level and number of details of the final product based on existing or, as in our case, not fully existing and partially reconstructed monument. Furthermore, the final 3D model portability in different platforms, the production cost and model size efficiency all need to be considered [3]. In this project we focused on the 3D reconstruction of the Macedonian tomb of Phillip II, one of the royal tombs excavated in the ancient city of Aigai in Vergina, Greece. The 3D model was created to give the interested user a sense of the geometry of the volume and spaces of the edifice and not necessarily a faithful and detailed representation, emphasising the aesthetic part of the 3D model. This figurative volumetric model resembles a digital mock-up, and can be experienced in an offline rendering or interactively rotated in 360 degrees, exhibiting a high-degree of realism and presenting the special characteristics of the materials.

Drawings and plans, provided by the IZ Ephorate of Prehistoric and Classical Antiquities, were used as the main source of information and the polygonal modelling technique was the preferred choice for the 3D model creation. Both the interior and exterior parts of the Tomb were modelled using SketchUp as well as MeshLab and Autodesk Maya tools. Special emphasis was given to modelling details of the façade and columns. The selection of materials and images for texturing was based on the analysis of textual descriptions and a collection of images retrieved from the web portal of the Ministry of Culture and accredited archaeological sources. Texturing of the individual surfaces was also performed in the above tools. For texturing the façade, in addition to the material library, a single image was used that was taken from the real scene. In order to achieve optimal results the original image was cropped into smaller images corresponding to individual planar or cylindrical surfaces of the façade, and draping was performed for each surface/image part.

For the photorealistic rendering of the reconstructed scene, we employed the open-source Mitsuba renderer [L1]. The reason behind this choice was that this modular, portable C++ renderer, implements latest unbiased as well as biased rendering techniques, and contains heavy optimisations targeted towards current CPU architectures. After several experimentations, we opted for the Monte Carlo path tracing technique, solving the complete rendering equation, using the generic parallelisation layer of the renderer. Thus, we were able to achieve fast frame renderings, suitable for a complete movie production that otherwise would demand a large render-farm to complete on-time with other commercial, production-ready renderers.

In order to allow efficient interchange of the various 3D scene elements between the different modelling and reconstruction software packages involved in the complete pipeline, we employed the Khronos Group open, COLLADA scene file format.

The figures display frontal and side views of the different versions of the 3D model using Monte Carlo path-tracing global illumination. These include the untextured geometric version (first row) and the textured versions based on the material library (second row) and the image draping (third row) as part of a production movie clip with a sample camera fly-through around the 3D scene of the reconstructed edifice. 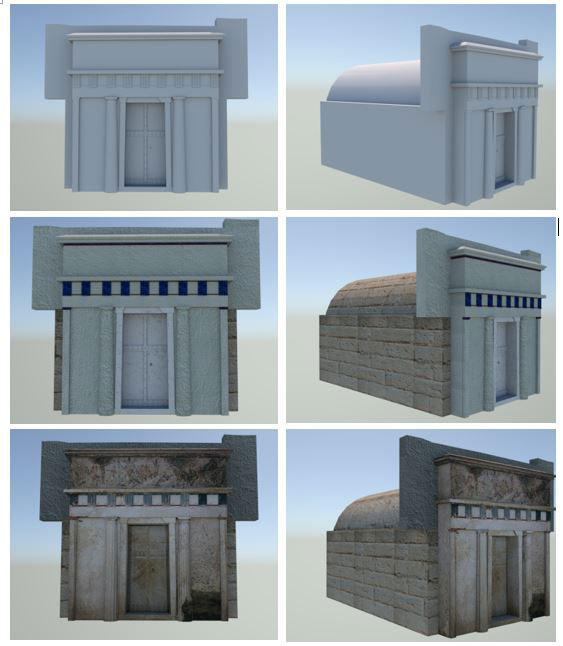 A modelling and simulation pipeline was presented related to the creation process of photorealistic 3D reconstruction of heritage edifices, using widely available standard tools. However, it is important to stress that the optimal choice of the modelling strategy to be followed depends on the specific objectives and the complexity of the heritage item being reconstructed.