“Supporting Blue Growth with innovative applications based on EU e-infrastructures” was the motto of the final event of the BlueBRIDGE project [L1], held on 14-15 February 2018 with participation of over 50 stakeholders, including policy makers, marine and maritime data practitioners, representatives from research institutions, international organisations, governments and EU-funded initiatives.

Blue Growth is the long-term strategy to support sustainable growth in the marine and maritime sectors as a whole. At the same time, Blue Growth has significant data needs that are only partially met. The BlueBRIDGE H2020 project that began in 2015 has worked hard to address these data gaps by developing innovative solutions in the form of Virtual Research Environments (VREs). The final event proposed a rich selection of BlueBRIDGE data services to these future adopters as well as to inventory potential interest for further collaboration with private and public stakeholders.

How does BlueBRIDGE support Blue Growth? Is there a concrete demand for global repositories of merged public data?
The main mission of BlueBRIDGE is the exploitation of data e-infrastructures to facilitate communities of scientists, data practitioners, SME innovators and educators from various domains to address Blue Growth challenges related to the knowledge production chain. The major barriers that these communities currently encounter are related to i) the difficulty of accessing heterogeneous data that are spread through multiple remote sources and ii) the complexity of the technologies available to process these data. The barriers make a data-centred research process quite slow, if not impossible to pursue.

The solutions developed by BlueBRIDGE aim at removing these barriers. BlueBRIDGE is serving the Blue Growth sector by having developed a set of Virtual Research Environments (VREs), collaborative applications that data managers and policy makers can use to access and analyse data in an easy way. All of the BlueBRIDGE VREs rely on a European hybrid data e-infrastructure, D4Science (www.d4science.org). 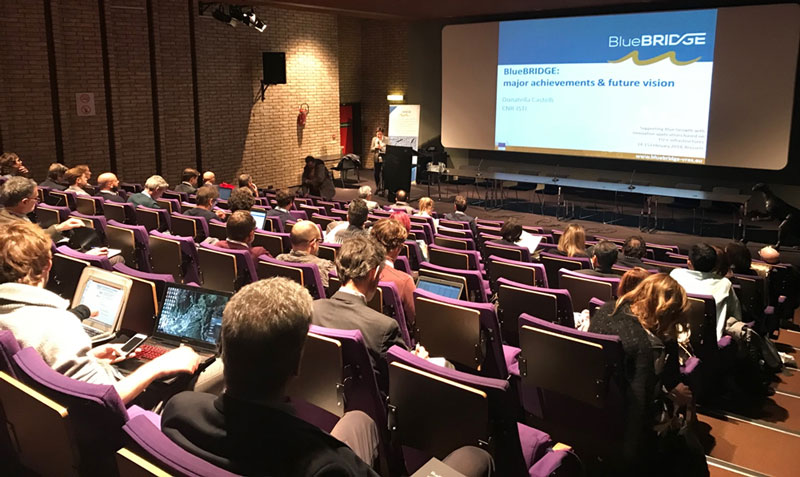 The BlueBRIDGE Services at a glance
FFacilities offered by BlueBRIDGE include services that render the usage of computing resources transparent for the end user, from data production and representation to the discovery of and generation of complex data products. The underlying BlueBRIDGE infrastructure automatically collects information on the processes performed, facilitating the repeatability and reproducibility of experiments and the reuse of results. These features were particularly important in recent studies conducted to estimate the spread of the pufferfish in the Mediterranean Sea, and to develop a general purpose approach which can also be applied to other species, as well as in the climate change area.

Is there a concrete demand for such global data repositories?
In a panel session during the workshop, the participants explained that it is important to build such repositories because the aggregated repository can generate added value data. And, this doesn’t mean that the single data source will lose its value! On the contrary, the aggregate data can highlight even better the mandate and the purpose for which the individual data source was created. 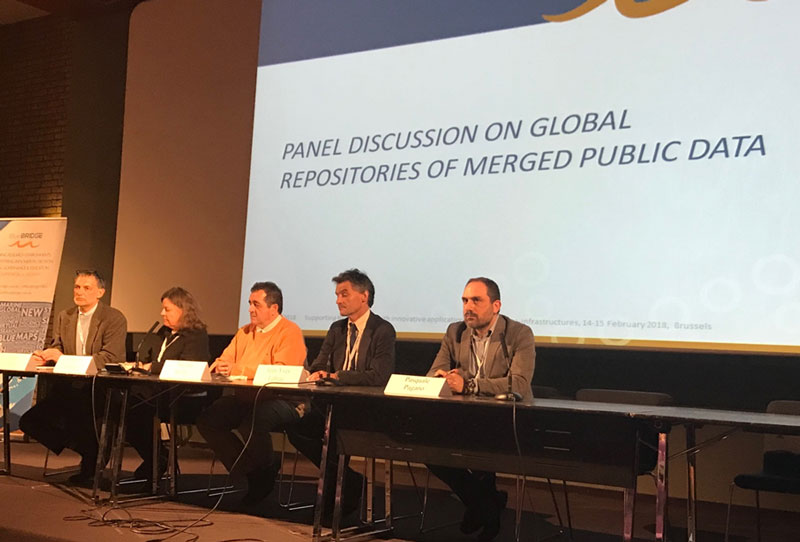 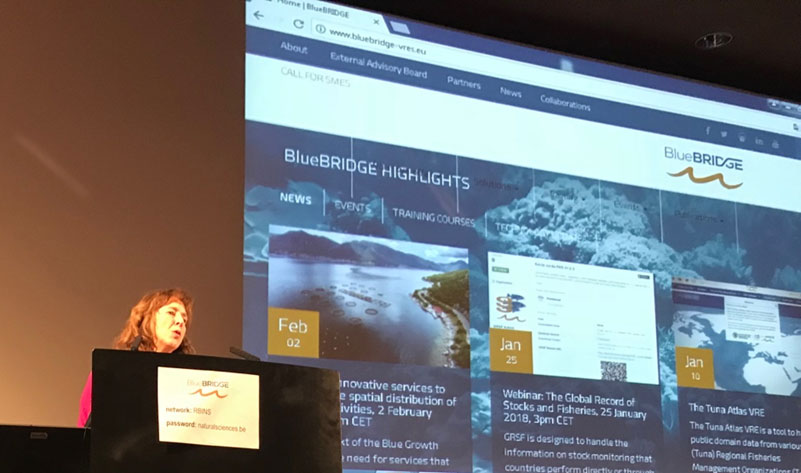 We can only understand the seas and the oceans if we approach them as ecosystems
“Digitalisation of seas and oceans is the new gold of the future, but we can only be successful if we re-use existing data and applications, and if we look at the earth as a system of land, ocean and space,” said Sieglinde Gruber, Head of the Marine Resources Unit, DG Research and Innovation of the European Commission.

Gruber recognised how BlueBRIDGE was able to work in that direction by bringing together different stakeholders, reusing existing technologies and datasets, and trying to leverage as much as possible on previous investments. In particular, the wide scope of BlueBRIDGE was appreciated in terms of the variety of stakeholders reached and its use of marine data combined with satellite data to address the data challenges of the “earth” ecosystem.

BlueBRIDGE supporting maritime spatial planning
A Protected Area Impact Maps VRE, developed by GRID-Arendal improves the understanding of the spatial distribution of existing and planned marine protected areas and their coverage of seafloor features. The VRE is the result of a joint collaboration with the European Commission Joint Research Centre (JRC). This is the second time the two teams join their forces: by combining a wide range of open source tools, a new machine with increased functional capacity will ease data processing workflow, sharing it as a versioned resource. This progress will significantly facilitate access and replicability of codes, environmental settings, parameters and maps on the status of marine protected areas in African, Caribbean and Pacific (ACP) countries. Biodiversity conservation specialists working in BIOPAMA, The Biodiversity and Protected Areas Management Programme, should benefit enormously.

BlueBRIDGE developed services that collect and combine Environmental Observation (EO) data with aquaculture data presenting the three VREs to support a computing intensive ontology driven feature analysis of Synthetic Aperture Radar (SAR) and multispectral optical imagery (using Sentinel-1 and -2 data, and Very High Resolution optical imagery), where the results are displayed on maps for human reviewers. The first two VREs are specialised in recognizing offshore fish farming in Greece and Malta, whilst the third one is specialized in identifying coastal aquaculture ponds in Indonesia.

BlueBRIDGE Supporting aquaculture
Using the services provided by BlueBRIDGE, aquafarmers can estimate the performance of their production exploiting state of the art Machine Learning methods based on the real historical production data. Furthermore, they are able to make accurate production plans, future investment plans by exploiting the geoanalytics platform and techno-economic analysis combining production, financial and environmental data. In this way, they can make correct and timely decisions to strengthen their aquaculture’s position against competition.

BlueBRIDGE supporting education
Efforts made by BlueBRIDGE and other initiatives address training required to access datasets or executing data-intensive models which at the moment are quite costly and effort consuming. The BlueBRIDGE VREs have demonstrated to be a good instrument to support this type of training and they are considered particularly useful in developing countries where internet connection and technologies competences are not well developed.

For more details, all presentations of the BlueBRIDGE final event can be found at [L2]

The BlueBRIDGE project is coordinated by ISTI-CNR, while ERCIM EEIG provides administrative and financial support.

Please contact:
Donatella Castelli, ISTI-CNR
This email address is being protected from spambots. You need JavaScript enabled to view it.