5G-VINNI, a European H2020 funded project, focuses on the third phase of the 5G PPP by deploying an end-to-end facility which demonstrates that the key 5G network KPIs can be met.  The 5G-VINNI facility in Patras/Greece is an exemplary open source 5G facility, which can be accessed and used by various vertical industries.

5G aims to significantly improve the capabilities of network infrastructure in terms of the supported key performance indicators (KPI). The telecommunications industry has aligned itself to a number of KPIs, including “1000 times higher mobile data volume per geographical area”, “10 to 100 times more connected devices”, “10 times lower energy consumption” and “end-to-end latency of less than 1ms” [1]. The 5G network will be a key asset to support societal transformation, societal cohesion and sustainable development by empowering the vertical industries. In a number of white papers and publications the 5G PPP has described use cases and requirements of several vertical industry sectors, such as automotive, e–Health, energy, entertainment, manufacturing and others [1].

The 5G-VINNI facility in Patras/ Greece is an exemplary open source 5G-IoT facility. This means that most of the installed components are offered as open source but there are also dedicated components and services to support 5G-IoT scenarios. Various solutions are deployed in the Patras/Greece facility, thus creating a unique 5G playground for KPI validation and support for future verticals. In Greece/Patras 5G facility site the following tasks are performed with the 5G-VINNI project:

Figure 1 displays a high-level view of the Patras facility site end-to-end design including all the necessary components. The facility will be interconnected with GRNET NRN in Athens that will allow high speed connectivity to public internet but also to dedicated GEANT links or VPN connections with other 5G-VINNI sites or other universities or research institutes across Europe. 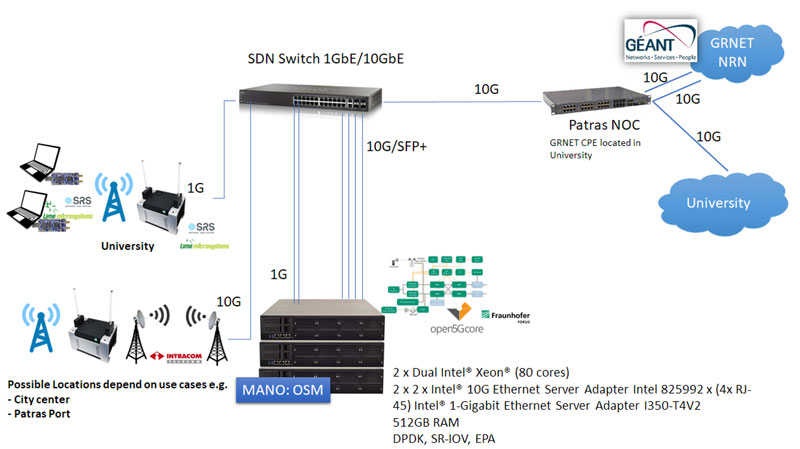 Detailed radio planning studies (see Figure 2) have been performed by Intracom Telecom (a Greek company/partner of 5G-VINNI) to identify the optimum locations, the appropriate equipment and its configuration, in order to provide high-speed fixed wireless access to two public service establishments, and to cover this, along with a collocated gNB, with high capacity, low latency, long range backhaul. Point-to-Point mmWave wireless links, operating at 71-76/81-86 GHz and delivering up to 10 Gbps, will interconnect the university campus with selected sites several kilometres away, backhauling the gNBs . Fixed wireless access (FWA) links at 26/28 GHz bands, providing up to 1 Gigabit Ethernet to the subscriber and up to 1.6 Gbps aggregate capacity per sector, will interconnect two buildings of public interest in the Patras sub-urban area, providing access to 5G-VINNI core network services.

The RAN section of the Patras facility will comprise both an indoor and outdoor testbed. The indoor testbed will be primarily utilised for short-distance RF link experiments using low power SDRs. This more controlled environment is ideal for prototyping and more preliminary experimentation, before placing the radio nodes in the field. The outdoor testbed will, in turn, be mainly focused on long-distance experiments with network topologies that better match those observed in real-world RANs. The equipment is based (see Figure 3) on Limemicro’s SDR products. The 5G mobile core is realised by the deployment of Fraunhofer FOKUS’ Open5GCore. Finally, the cloud/network function virtualisation infrastructure (NFVI) is based on Openstack and Kubernetes and utilises generic off-the-shelve switches.

Currently, the Patras facility has already met the challenge of delivering a 5G facility based mostly on Open Source components. Due to lack of 5G NR UEs SDRs cards attached on laptops have been used to initiate testing of 5G KPIs. The facility implements network slicing and slice templates utilizing open source components thus the facility delivers isolated logical networks, running on common infrastructure, mutually isolated and created on demand. The performed tests so far involve both Virtual and Physical Network Functions (VNFs/PNFs), various PoCs have been performed or scheduled in near term (like concurrent execution of different slice types eMBB and URLLC) while the facility prototypes the automated orchestration and delivery of an end-to-end isolated 5G network for every tenant, allowing multiple experiments to be deployed, depending however on the available resources.

The following use case is performed in the facility and will help to measure various 5G key performance indicators:

Please contact:
Christos Tranoris
University of Patras, Greece
This email address is being protected from spambots. You need JavaScript enabled to view it.