Device-to-device (D2D) communications sharing the spectral resources with the cellular users is one of the enabling technologies for the 5th generation (5G) of wireless networks. Among the major 5G use cases that can benefit from D2D communications are the massive machine type communication (mMTC) in the internet-of-things (IoT) networks, vehicle-to-vehicle (V2V) communications and ultra-reliable and low latency communications (uRLLC). D2D communications exploit the proximity of devices to achieve low latency, higher spectral efficiency and less energy consumption [1]. In addition, the heterogeneous deployment of macro base stations (BSs) and small BSs is seen as one of the main technology drives that could boost the spectrum efficiency if frequency reuse over the different tiers of the wireless network is applied.

One major issue with frequency reuse is that users’ equipment (UE) is normally associated with the BS that has the highest received signal strength which results in the small BSs being underutilised owing to their low transmission power. For this reason, 3GPP introduced a virtual expansion of the coverage area of the small BSs by adding a bias value to their received signal at the UEs [2]. This is known as the cell range expansion (CRE) and is shown in Figure 1. On one hand, CRE helps by offloading UEs from the macro BS to the small BS. But on the other hand, it creates a vulnerable region at the edge of the small BSs where UEs are prone to high interference from the macro BS. One of the interesting approaches to protect those UEs at the edge between the small BS and the macro BS, called here edge UEs, is the enhanced time-domain inter-cell interference coordination scheme (eICIC) [2]. In eICIC, the macro BSs mute their downlink transmission during certain sub-frames so the small BSs can serve the edge UEs. Those sub-frames are known as the almost blank sub-frames (ABS) and their value is related to the expanded region of the small BS. However, the main drawback of eICIC is that the transmission rate and the delay performance of the UEs associated with the macro BS, called macro UEs, is reduced during the ABS sub-frames [3]. 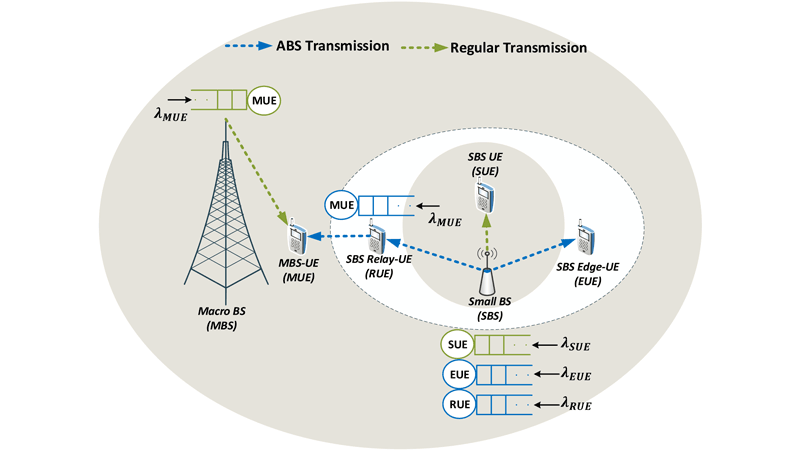 In our previous work [3], we proposed to improve the performance of the macro UEs during ABS sub-frames by integrating D2D communications with eICIC. We considered using the inactive UEs as relays, called here relay UEs, to the macro UEs to avoid the service degradation due to eICIC. This work is based on the assumption that there is a set of relay UEs at each small BS that can operate in D2D mode and serve as relays between the small BS and the macro UEs during ABS sub-frames. Relay UEs are associated with the edge region of the small BS to guarantee good channel conditions with the macro UEs. In Figure 1, we show that this approach could also improve the delay performance of the macro UEs with real time applications.

Figure 2 shows the structure of the proposed downlink resource grid. BSs can allocate multiple resource blocks to the UEs depending on the required data rates. The fundamental idea of our approach is to exploit the frame structure to relay the downlink packets from the small BS to the macro UEs through the relay UEs during ABS sub-frames. We assume that a central controller at the core network, which is connected to the BSs via optical fibre back-haul links, is responsible for allocating the resource blocks to the UEs. We also assume that BSs have global knowledge of the channel state information to facilitate the allocation of resource blocks. We assume that macro UEs have dual connectivity and their downlink data packets are delivered through both the macro BSs and the small BSs. During ABS sub-frames, the macro BS does not transmit to the macro UEs and ABS sub-frames are divided into two time slots. In the first slot, the small BSs transmit to the relay UEs. While in the second slot, the relay UEs forward the packets to the macro UEs using decode and forward protocol. Note that during ABS sub-frames, the small BS is able to transmit to the edge UEs as well since orthogonal OFDMA subcarriers in the frequency domain can be used during the same time slot. 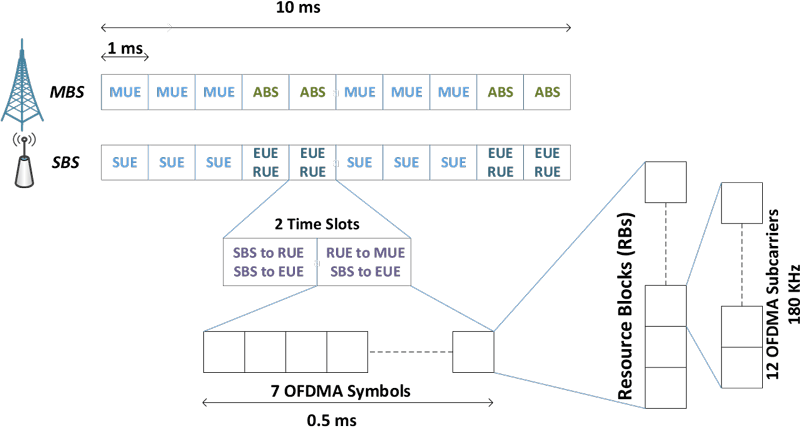 In this work we are considering a resource allocation approach that gives higher priority to the edge UEs during ABS sub-frames, which means that increasing the traffic load at the small BSs leaves fewer resources for serving the macro UEs in the proposed D2D-eICIC. The reason for this priority-based resource allocation is to guarantee that small UEs’ performance does not degrade with D2D-eICIC. In Figure 3 we show the sum-rate performance of the proposed approach in comparison to the traditional eICIC (without D2D communications) at varying percentage of the traffic load at the small BSs. The upper two lines show the total sum-rate of the network and it shows that D2D-eICIC performance is always higher. We can also observe from bottom two lines that the sum-rate of the macro UEs is higher for D2D-eICIC at low traffic conditions at the small BS. However, this gain in the macro UEs’ sum-rate decreases when the traffic load at the small BSs increases. Finally, the middle two lines show that the small UEs maintain the same sum-rate in D2D-eICIC compared to the traditional eICIC, which is a result of the priority-based resource allocation at the small BS. 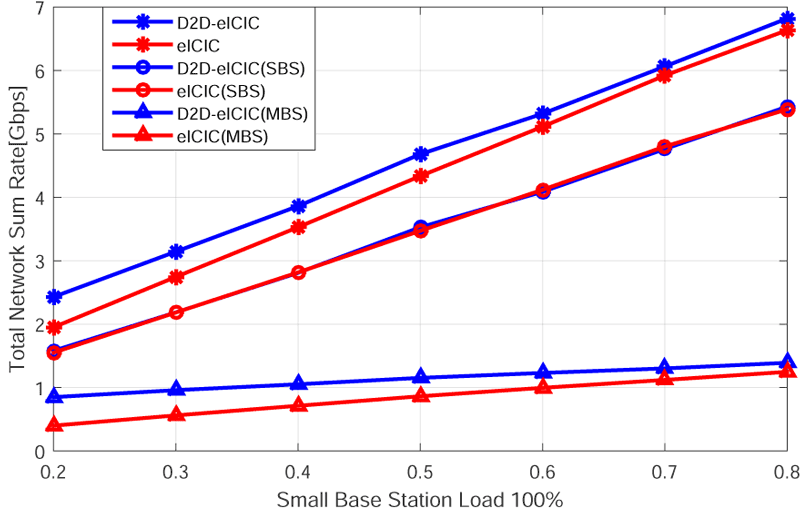 Figure 3: Sum-rate vs. traffic load at the small base stations.

Please contact:
Mohamed Elshatshat
ICS-FORTH, Greece
This email address is being protected from spambots. You need JavaScript enabled to view it.