5G trials are beginning in several parts of the world. The smarter core capabilities, along with increased network capacity, very low delays and native support for machine-to-machine communications, open up several new application scenarios, while reinforcing existing ones. This work focuses on the joint use of aerospace platforms and 5G networks, surveying the huge advantages that their seamless integration can bring to the market, enabling ever more use cases and potentially providing coverage in low-population and low-income areas.

In the past, the main role of satellite networks has generally been perceived to be to provide backhauling solutions in remote or hard-to-reach locations. This assumption is based on the technical complexities of integrating satellite and terrestrial networks, due to the lack of prevalent standards and the proliferation of vendor-specific solutions. With the advent of 5G networks and the adoption of software defined radio (SDN) and network function virtualization (NFV) paradigms, the role of satellite networks can change due to the ease with which they can be integrated with existing network infrastructures.
In fact, such an integration will create significant new opportunities for both terrestrial and aerospace networks, thanks to a greater flexibility in the operation and evolution of end-to-end network services.

While the SDN approach is well consolidated on wired networks, thanks to the match/action abstraction characterising the operation of heterogeneous network nodes, in the wireless domain there is not a clear programming model for access nodes.

Indeed, unlike wired networks, node configurations at the physical layer (such as the transmission bandwidth, power, modulation format, etc.) have a direct impact on link reliability, coverage and capacity, thus introducing a further level of flexibility on the data plane. In order to provide the “southbound interface” for the network controller, it is therefore necessary to abstract the behaviour of terrestrial and aerial base stations in terms of a common model and a set of programmable network functions, decoupled from proprietary hardware.

Base Station Abstractions
Although terrestrial and aerial base stations have different peculiarities in terms of cell breathing opportunities, available transmission power, link configuration capabilities, multi-user management, and so on, we can easily recognise some common sub-systems: an outdoor unit, including the antenna and the remote radio head, responsible for acquiring signal samples; a baseband unit, responsible for mapping bits into symbols and samples and vice versa; one or more forwarding units, responsible for opportunistically accessing wireless resources and managing traffic queues with multiple priorities; one switching unit, responsible for steering traffic flows between the core network and the wireless access network or from one wireless forwarding unit to another (as in the case of relay nodes). Each sub-system will expose a parametric configuration interface (as in the case of the remote radio heads), an application programming interface for defining specific behaviours (for example, for configuring the switching rules following OpenFlow that is a communication protocol enabling SDN operations), and the possibility of executing software-defined network functions, including baseband, framing and scheduling functions. A set of additional network functions can be defined at higher levels in the access network, including proxy functions, TCP (Transport Control Protocol) optimisations, HTTP and content caching.

Controller Operations
The abstraction of wireless access nodes into subsystems, with internal parameters, states, and application programming interfaces will allow the definition of control logics completely decoupled from the node capabilities, which can also benefit from global and dynamic views of the network. Examples of reconfigurations of the access nodes can include activating/deactivating a satellite interface, loading a new switching rule sending machine-to-machine (M2M) traffic to a link toward an aerial base station or loading a new baseband function. The aggregation of network data and configurations into global views will be provided by the wireless network operating system, while the logic for enforcing a specific configuration of the access network will be specified by a network control program. Different control programs could also be defined for managing independent network slices, pursuing different application requirements and optimisation goals.

SDN and NFV are and will continue to be the main drivers of the integration between 5G [L1,R1] and aerospace networks [1, 2], by taking advantage of softwarisation. Figure 1 shows how the virtualisation of the physical layer can be used to abstract from a specific radio access network (RAN), in order to provide customisable and scalable solutions to enable the application scenarios under consideration. NFV is expected to provide a significant reduction in capital expenditure and operating costs, thus permitting more flexible and economical installations compared with to the previous cellular generations.

One way that this can be achieved is through network slicing, a concept that was introduced in 3GPP release 15. Such a tool can be used to meet communication requirements in a variety of application scenarios, by allowing flexible and tailored use and configuration of both network resources and network functions (NFs). In fact, each network slice can exploit shared resources, which are orchestrated by centralised coordinators.

In Figure 1, we show how network slicing (by means of the network slice instance layer) can be achieved by exploiting SDN and NFV, in order to provide a perfectly tailored service to the service instance layer. This allows match application demands to be matched to the available network resources in an adaptive way, in order to satisfy both operators’ revenues and scenario requirements. It is worth highlighting how network functionalities, for instance, a subset of RAN, can be used by multiple slices in a shared way, in order to minimise operating costs. 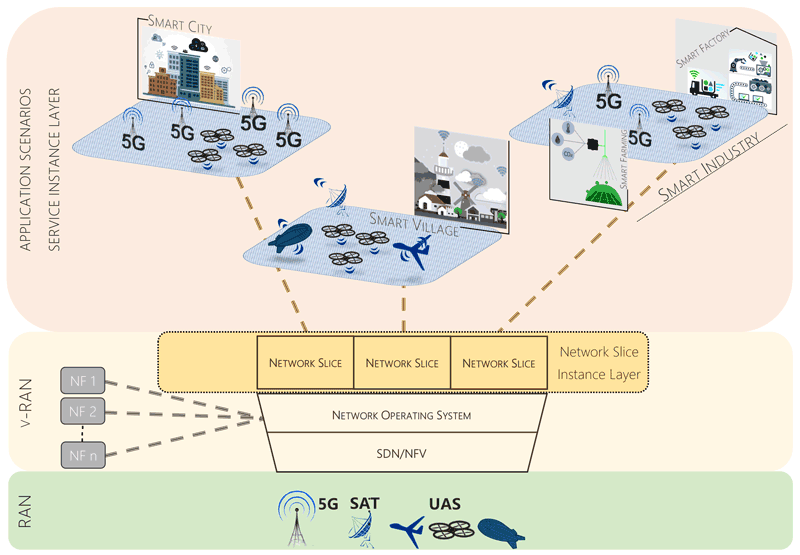 Figure 1: SDN and NFV techniques can provide an easy integration between 5G and aerospace networks in the considered application scenarios thanks to the virtual RAN (v-RAN), the virtualised network functions, and 5G network slicing. All network resources and network functions are coordinated by distributed network intelligence.

Please contact:
Pietro Cassarà; ISTI-CNR, Italy This email address is being protected from spambots. You need JavaScript enabled to view it.