Airborne information gathering can benefit crisis and disaster management by allowing authorities to quickly obtain an overall operational picture and gain in-depth insights into specific aspects of the situation. Developments in the field of unmanned aerial vehicles (UAVs) and the associated sensor technology are opening up a wide range of application areas, helping authorities and organisations tasked with security to reduce the operational risks. These areas of application are being investigated in the AREAS research project.

Austria’s hazard landscape is characterised by natural hazards. A large part (75% of the total area) of Austria is covered by the Alps, and consequently the threat of natural hazards is higher than in most other European countries, with several such events occurring each year. Because of this, 58% of the national territory is declared as intensive zones of protection against alpine natural hazards. Furthermore, about 17% of the country’s landmass is extensively threatened by torrents, avalanches and erosion. Austria has clearly defined protection goals when it comes to managing natural hazards, including the protection of human life and health, protection of the environment and protection of settlement areas. These protection goals are highlighted in the research project “AREAS: Aerial search & Rescue support and supErvision of inAccessible terrainS” [L1] that focuses on airborne support.

Methods
The multidisciplinary consortium involved in the AREAS research project is investigating unmanned airborne reconnaissance, which can significantly reduce the risks for emergency services when exploring unknown terrain. The project is bringing together modern technologies such as UAVs and sensor technology in a combined research design to provide resource-efficient support for users in public safety and natural hazard management applications (“end-users”) and to provide valuable information about the current situation. The AREAS use cases were derived using an interdisciplinary approach starting with a requirements phase. In this phase, the end-user’s needs were thoroughly examined in workshops from which we developed project goals that relate to the operational realities of the end-users.

Based on the scenarios and use cases that we established in the workshops, the detailed functional and technical requirements for the system architecture to be developed were defined, taking into account the existing legal framework in national aviation and data protection. This technology has a range of potential applications, but for our use cases we gave special priority to torrent monitoring (early detection of sedimentation, degree of filling of bed load barriers, material deposits) and search for missing persons.

Results and Discussion
(i) Population survey: We conducted sociological research to investigate the potential fears, hopes and subjective feelings of the Austrian population regarding an official government UAV deployment and to make such a deployment as socially acceptable as possible. For this purpose, an Austria-wide, representative telephone and online survey of 1,280 individuals was carried out in 2019; two focus groups were held; and finally acceptance-promoting recommendations were developed.

The results of the survey showed that people’s opinion about the use of UAVs varies strongly depending on the area of application and the user. For example, a minority of respondents (23%) supported the use of UAVs for leisure purposes (e.g. as toys), while commercial or professional applications rated somewhat better (67%). The negative public perception of UAVs was confirmed by an association test conducted as part of the survey, using the terms “drone”, “flying drone” and “unmanned aerial vehicle”. The test showed that for many people these terms carry negative connotations associated with surveillance or harassment – a finding in accordance with the results of the focus groups.

However, when asked about UAV usage by public authorities in civil protection and disaster relief, 88% of respondents expressed support. The majority of respondents approved of the use of UAVs for official applications such as to search for missing persons in nature (92%) and in acute disaster situations in inhabited (90%) and uninhabited areas (87%). For routine checks of protective infrastructure in unpopulated areas or torrents that are not urgent, the approval rate was still 82%–83%. For UAV use in official contexts, the lowest rate of approval was given to UAV use for police-related searches in villages and towns (66%).

These results support the findings of other studies and research projects that the general population’s attitude towards the use of UAVs varies considerably depending on the context and the field of application [1, 2].

(ii) Data analysis of torrent monitoring: The monitoring of alpine torrents contributes significantly to the prevention of high-risk natural events like mudflows. Currently, federal authorities carry out regular inspections on foot. We developed a more efficient solution utilising a UAV equipped with a multi-target laser scanner to obtain detailed 3D point clouds of the torrent’s vicinity even in the presence of dense vegetation. Data was collected on three dates over two years. An automatic data analysis pipeline evaluates and compares the current against historic inspections and highlights potentially critical areas, i.e. unfavourable changes of the terrain and/or torrent flow path. Together with regular in-flight camera images (Figure 1) and readily available 3D data, this system enables experts to efficiently assess large and impassable areas. 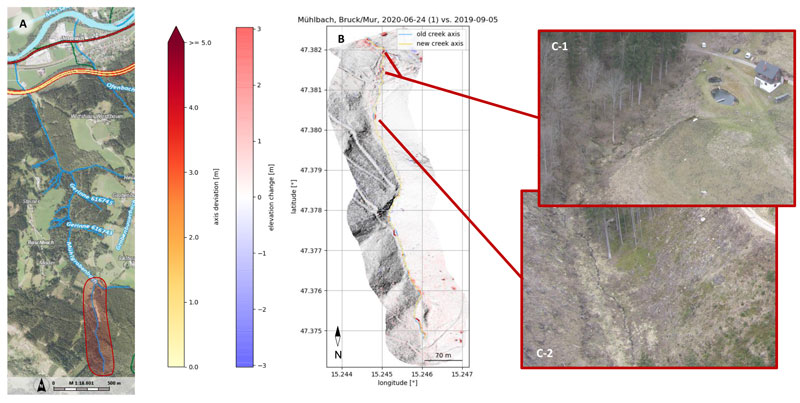 The AREAS results contribute to the protection of infrastructure assets and the population and can provide decision-makers with essential support in their respective areas of responsibility.

The project AREAS is funded by the Austrian security research programme KIRAS of the Federal Ministry of Agriculture, Regions and Tourism (BMLRT).

Please contact:
Alexander Preinerstorfer, AIT Austrian Institute of Technology, Austria
This email address is being protected from spambots. You need JavaScript enabled to view it.