The tumult surrounding 5G continues in Switzerland. The telecommunications providers are intensely promoting 5G; industry is waiting for 5G, citizens are concerned about potential health issues associated with 5G, and the press is full of articles about 5G. In a few years, the technology will also use millimetre-wave transmission. In anticipation of this in June this year the Swiss Research Foundation for Electricity and Mobile Communication (FSM) at the Swiss Federal Institute of Technology in Zurich organised a millimetre-wave workshop.

The millimetre-wave workshop, held in Zurich in June, 2019, touched on many topics, most of which were directly or indirectly related to the interaction between millimetre-waves and humans, and the ways that 5G might impact us. Many of the charts from the presentations are available at [L1]. 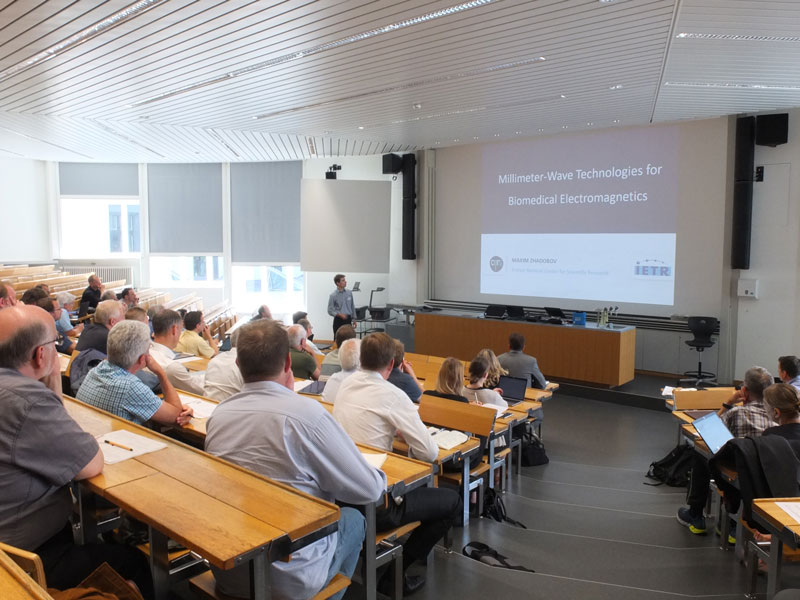 Millimetre-waves have been around us for a long time: They have many commercial applications such as material surface treatment and physical measurements and are also used in radar for contactless detection systems, such as speed detectors and weather radar. Other applications are directly relating to people, including medical applications, such as computer tomography scans. An overview of commercially available applications was given by Christoph Baer, Ruhr-University in Bochum, and of biomedical applications by Maxim Zhadobov, French National Centre for Scientific Research, Rennes.

The public’s main concern is the effect of 5G millimetre-waves on our health and wellbeing. We know that electromagnetic fields interact with the human body. The type of interaction depends on frequency, the magnitude of effects on field-strength or power. In the microwave and millimetre-wave domains exploited by mobile communication technologies, the relevant interaction mechanism is believed to be energy absorption.

It is known, as Maria Rosaria Scarfi from the Bio-EM Lab in Naples pointed out, that overexposure may have detrimental health effects on the tissue level like coagulations, structural protein damage or disruption of organic functions. However, regulatory frameworks limit human exposure and protect against such risks. In terms of non-thermal biological effects that might occur at low exposure levels, no experimentally verified mechanism is known for either microwaves or millimetre-waves.

Scarfi presented a literature analysis of published in-vitro experiments with millimetre-waves. Most articles reported effects, many of them beneficial in nature. However, given the low quality of most studies, especially regarding dosimetry, it is premature to draw conclusions. This makes it almost impossible to separate thermal from potential non-thermal effects. Furthermore, no consistent correlation between effects and exposure conditions (frequency, power density, exposure duration) could be identified. This might reflect the real situation, however, it is possibly an artefact stemming from experimental choices or publication bias. Scarfi concludes “The available studies do not provide sufficient and adequate information for meaningful safety assessments” and she sees an urgent need for further, more carefully controlled studies.

The complexity and challenges of bioresearch, including modelling, with millimetre-waves was further elaborated by Joachim Oberhammer from Karolinska Institute, Stockhom, Daniel Erni, University of Duisburg-Essen (presentation given by Sonja Huclova) and Sven Kühn from IT’IS, Zurich. The talks focused on the skin, which is the relevant interaction tissue for wavelengths in the millimetre range. Huclova showed that we need multi-scale skin models in order to properly assess energy absorption of microscopic structures such as hair channels and sweat ducts, and more empirical research into the tissue parameters for sub-THz frequencies. This call for more accurate numerical models and measurement data was corroborated by Kühn’s presentation, which stressed limitations in the current exposure guidelines that require review and updating.

Oberhammer’s presentation introduced millimetre-waves as diagnostic tools, especially for skin-cancer screening. Currently, no technology is available to perform screenings that are efficient in terms of both time and money. The sensor-concept presented is a solution that has already been tested. Its rationale: because melanoma have higher water content compared to healthy tissue or benign tumours, scanning absorption rates of electromagnetic millimetre-wave energy with probes allows identification of malignant tumours very quickly, even by non-dermatologists. Oberhammer described the first micromachined, high-resolution probe with a size below 1 mm and an operating frequency of 100 GHz.

In an earlier paper, “5G: A View from Switzerland” [L2] the authors wrote about the public's concerns regarding 5G frequency allocation and non-ionizing radiation limits as they pertain to mobile wireless communication. Three presentations at the workshop were devoted to this topic. Philippe Horisberger from the Swiss Federal Office of Communications (BAKOM) reported on the many institutions working on the standardisation of 5G, including frequency band allocation on the global level. The organisations working on these tasks include, among many others, the IEEE and ITU at the international level, ETCI and CEPT in Europe, and many industry and national standardisation organisations. The roadmap for harmonisation of the 26 GHz band in Europe was presented as well as the planned allocation of a total of a bandwidth of 33 GHz in the domain between 24 and 86 GHz scheduled for the World Radio Conference in November 2019.

Specifically related to health issues is the ICNIRP, the International Commission on Non-Ionizing Radiation Protection. Martin Röösli, member of the commission, discussed the current (preliminary) status of the revision of ICNIRP's guidelines in the millimetre-microwave region. The guidelines are specifically aimed at protecting humans from potentially detrimental health risks under realistic circumstances for two specific populations: the general public and those people particularly exposed through their professional work. The presentation focused on both microwave and millimetre-wave frequencies. Concerning the latter, ICNIRP intends to make the following major adjustments (proposal status): first, maximum energy absorption by the body (technically defined as Specific Absorption Rate SAR) must be respected up to 300 GHz (formerly: 10 GHz). Second, the regulation on maximum power density starts with 6 GHz (formerly 10 GHz). Finally, SAR should extend down to 6 GHz (formerly 10 GHz), so, between 6 and 10 GHz both SAR and power density limits must be respected.
We look forward to the imminent revision of the ICNIRP guidelines.

IEEE recommends similar, but not identical, standards as ICNIRP. Work is underway to consolidate the recommendations of those two bodies. Ralf Bodemann, EMF consultant from Munich and former Chairman of IEEE ICES aka IEEE Standards Coordinating Committee 39 (SCC 39), explained the current status of the revision process: only marginal revisions to the current guidelines are under discussion, and they include the addition of exposure standards for consumer goods.

Workshop participants received a research update on millimetre-waves, from technical to biological issues, to the status of ongoing discussions on regulatory revisions. An important outcome of the 1.5 day gathering at ETH in Zurich was that the scientific community needs additional tissue data and more detailed models to properly simulate the interaction between millimetre-waves and the skin, and it needs more high-quality in-vitro bio-experiments in order to verify or to falsify the as yet unclear status of the many effects reported in literature.

Please contact:
Gregor Dürrenberger, Swiss Research Foundation for Electricity and Mobile Communication, ETH Zurich,
+41 44 632 5978
This email address is being protected from spambots. You need JavaScript enabled to view it.