CWI has awarded David Chaum and Guido van Rossum for the first time the newly established honorary title ‘Dijkstra Fellow’. Chaum ‘forefather of blockchain’ is well known for his groundbreaking research in the area of Privacy and Cryptology and the development of digital currency. Van Rossum created the world-famous programming language Python almost 30 years ago, when he was working at CWI.

With the Dijkstra Fellowship CWI aims to recognize the impact of their groundbreaking work on mathematics and computer science. The Fellowship is also a recognition for the contribution they made to CWI’s reputation as a pioneer in the area of Mathematics and Computer Science. The honorary title is named after former CWI researcher Edsger W. Dijkstra, who was one of the most influential scientists in the history of CWI by - next to other accomplishments - developing the shortest path algorithm. 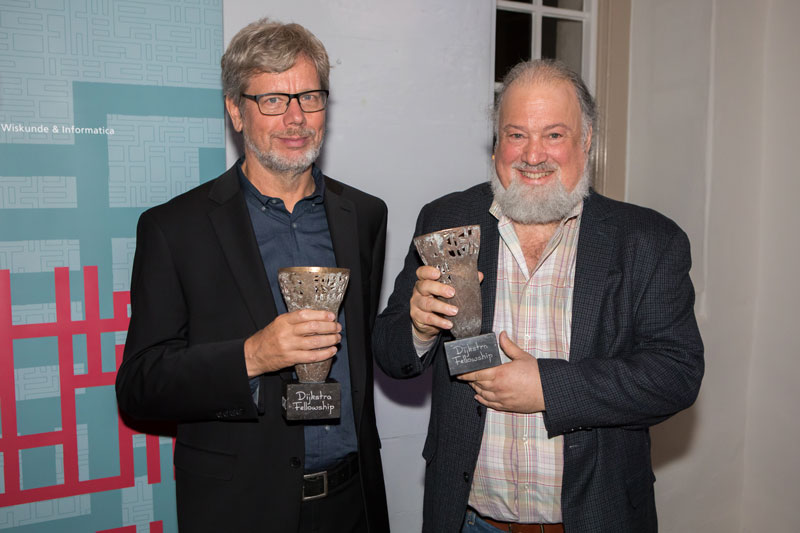 David Chaum (right), mathematician and computer scientist receives the honorary title “Dijkstra Fellow” for his advanced research in the area of Privacy and Cryptology. By setting up the Cryptology research group at CWI in the early 80’s, he brought modern cryptology to Europe. He is internationally recognized as the founder of digital currencies and blockchain technology. Spin-off Digicash emerged from his research work. Chaum developed eCash, the precursor of the bitcoin, under the flag of Digicash.