As the notion of circular economy gains momentum, intelligent assets increasingly form the backbone of sustainable ecosystems. Although these assets can supply the necessary knowledge for fueling the value drivers of a circular economy, the generated value will be significantly amplified by allowing third parties to manage them and profit from better asset utilisation. However, for an ever-changing networked environment consisting of numerous assets, ownership needs to be dynamic, granular and adaptable in order to maximise gains. Blockchain-based mechanisms can effectively serve this need by enabling transfer of asset ownership directly between parties participating in the circular economy while introducing trust, efficiency and automation in asset exchange contracts.

The term “circular economy” refers to an economy that is restorative and regenerative by design, aiming to keep resources at their highest utility and value at all times. Its value drivers include extending the useful life of finite resources, maximising the utilisation of assets and creating new use cycles for end-of-life assets. Simultaneously, assets leverage advances in IoT, thus creating an emerging class of “intelligent assets” [1] governed by three underlying attributes enabling circularity: location, condition and availability. These properties sufficiently describe the state of the asset for operating under a certain role in the ecosystem, but at the same time raise two fundamental questions:
•    How do these properties affect the value generated by the asset?
•    Who defines the role(s) of the asset?

Given that a value of an object is usually tightly coupled with its role in a system, these questions cannot be answered independently. Furthermore, in a complex system like a smart city, it is unlikely that a single possible answer for every asset exists. We thus introduce the idea of an exchange, where different entities can acquire a stake in an asset and operate it for their own profit. The entity operating the asset can define the asset’s role (within certain boundaries set by a global system owner) according to what it judges to be in its best interest. This leads us to two crucial concepts: asset ownership and asset control.

Transitioning from “Intelligent Asset” to “Intelligent Property”
Characterising an asset as a property, requires the owning party to (a) provide a universally accepted testimony of the asset’s ownership and (b) to have exclusive access to the asset itself. Both requirements can be achieved by registering the asset as a digital asset on the blockchain. Furthermore, all historical location, condition and availability properties which affect the asset’s value will be visible on the blockchain and signed by the respective asset owner at that point in time, thus guaranteeing that the data is trustworthy. Properties can be further augmented with asset data of particular interest to prospective buyers such as damages, alterations, repairs etc. Access to assets can be granted by combining the blockchain with owner-signed access tokens as described in Table 1. 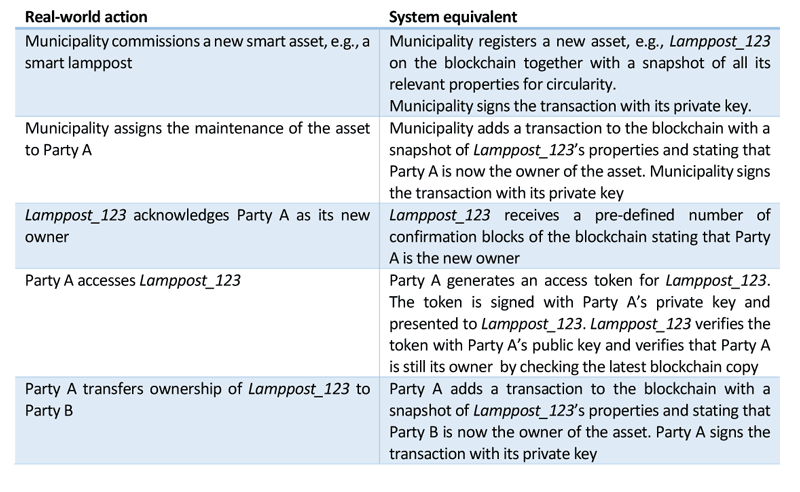 Table 1: Sample sequence of actions for an intelligent asset blockchain. 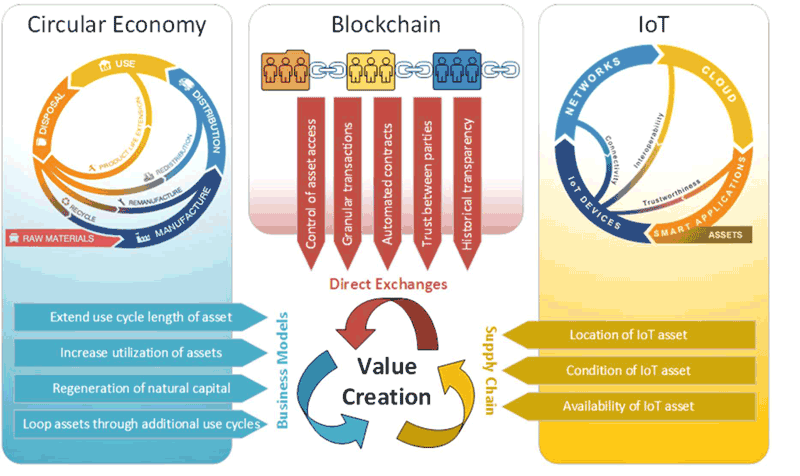 Blueprint for a blockchain implementation for exchanging intelligent assets in smart cities
In the case of a smart city, the global system owner is the city’s municipality which has ultimate authority over all assets and is also responsible for setting the rules of the blockchain. The municipality, its intelligent assets and all potential owners of assets form a blockchain network. In this context, asset owner means the party which is responsible for and has a stake in operating the asset. An asset can either be obtained for operation/maintenance on behalf of the municipality (i.e., the municipality pays the owning party for services provided), or it can be leased from the municipality (i.e., the owning party pays the municipality a rent for the asset). An owning party controls the asset and is entitled to transfer its ownership to another party via a contract. The parties can also specify rules governing the contract which will be enforced automatically by the asset itself in the future under certain conditions. It should be noted that the actual payment of funds between parties is independent of the asset transfer, and may or may not be part of the same blockchain.

Figure 2 shows the resulting simplified blockchain resulting from the above scenario.

The proposed design is part of ongoing research taking place in the context of the Horizon 2020 project CyberSure [3] that is coordinated by Computer Emergency Response Team of the Foundation for Research and Technology-Hellas, in collaboration with the Cybersecurity Research Centre of Bournemouth University and the Circular Economy Research Centre of Ecole de Ponts Business School.

Please contact:
Ioannis Askoxylakis, FORTH, Greece
+30 2810 391723
This email address is being protected from spambots. You need JavaScript enabled to view it.
www.forthcert.gr