Action and language are known to be organized as closely-related brain subsystems. An Italian CNR project implemented a computational neural model where the ability to form chains of goal-directed actions and chains of linguistic units relies on a unified memory architecture obeying the same organizing principles.

Recent advances in cognitive psychology and neuroscience emphasize that action and language are not organized as insulated brain subsystems. Rather, language processing elicits perceptual and motor processes that are tightly coupled with the referents of what is heard or read. Rizzolatti and Arbib (1998) proposed that linguistic abilities developed phylogenetically on top of action control abilities, on the basis of a common brain substrate where the mirror neuron system plays a key role. Accordingly, area F5 of the monkey brain (where mirror neurons are located) is a precursor of human Broca's area (devoted to language processing), and language could have inherited the “grammatical” and combinatorial structure of actions. An Italian CNR project is currently exploring the related hypothesis that the ability to form chains of goal-directed actions (ie, action sequences leading to a distal result) and chains of linguistic units (e.g., sequences of phonemes, morphemes or words forming a sentence) may rely on the same neural architecture obeying a common pool of organizing principles.

Motor chains and lexical chains
Fogassi and colleagues (2005) have shown that motor and mirror neurons in the monkey inferior parietal lobule code single motor acts (eg. “reaching” or “grasping”) belonging to an action sequence and that their discharge reflects the intended goal of the whole action (eg. “grasping to eat” versus “grasping to place”). On this empirical basis, it has been hypothesized (Fogassi et al. 2005; Chersi et al. 2005) that this brain area contains highly ordered neural structures, where each goal-directed action sequence is represented by a separate chain of pools of neurons. Elements in one chain are not interchangeable with elements of other chains even if they code the same motor act. Execution and recognition of an action is achieved through the activation of the appropriate chain and thus to the pre-selection of specific neurons.

The analogy between action and word memory structures persuaded us to investigate the hypothesis that they can both be served by the same memory mechanisms for serial order, modelled as Topological Temporal Hebbian Self-Organizing Maps (T2HSOMs, Ferro et al. 2010). T2HSOMs are time-sensitive SOMs (Kohonen 2002, Koutnik 2007) whose nodes are fully connected through an add-on weighted temporal Hebbian layer. Upon presentation of a stimulus, all map nodes are activated synchronously, with the most highly-activated node (or Best Matching Unit, BMU) winning the competition. Through training, nodes are made more sensitive to particular classes of stimuli occurring in specific spatio-temporal contexts, with inter-node Hebbian connections being attuned to transition probabilities between temporally adjacent stimuli, thus affording predictive processing. 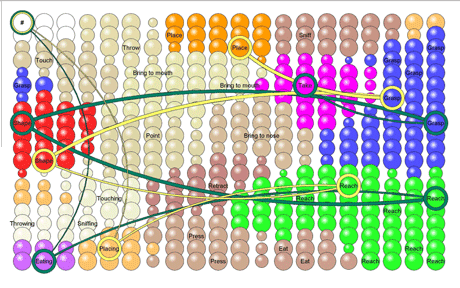 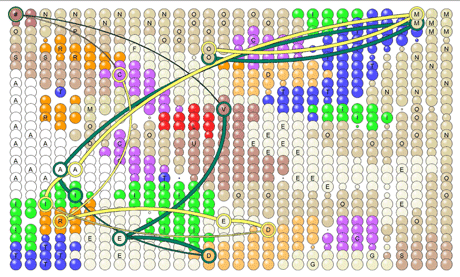 Figure 2: A 900 node T2HSOM trained on Italian verb forms. BMU chains are shown for “vediamo” (“we see”) and “crediamo” (“we believe”). Although the two forms share the common ending “-iamo”, the fact that the roots “cred-” and “ved-” are different produces the activation of BMU chains independently running through the map at a short topological distance (green and yellow trajectories). The “#” symbol is the “start of sequence” marker. The result shows node sensitivity to morphological structure.

Results and future developments
Figures 1 and 2 illustrate chains of BMUs in two T2HSOMs activated by action chains and word forms respectively. The effect is achieved with a “predictive drive”, making the network maximize prediction accuracy in perception, and effortless memory access of order information in production (note that the same network supports both perception and production). As a result, highly-ordered neural structures emerge as a response to repeated action patterns and word schemata.

Besides unravelling some fundamental mechanisms underlying the processing of time-ordered series, the model shows that apparently unrelated evidence on the neural coding of motor chains and word schemata is accounted for by the dynamic interaction of common principles of topological self-organization and time-bound prediction. This dynamic is key to modelling pervasive aspects of synchronization of multi-modal sequences in both linguistic (e.g. reading) and extra-linguistic (e.g. visuomotor coordination) tasks.

Please contact:
Marcello Ferro
"A. Zampolli" Institute for Computational Linguistics-CNR, Italy
E-mail: This email address is being protected from spambots. You need JavaScript enabled to view it.