The innovative contribution of this collaborative project between the University of Plymouth Robotics groups and the ESA Advanced Concepts Team was to successfully test the hypothesis that the island model paradigm permits the autonomous design of complex controllers for Mars rover robots, for navigation and active vision strategies, thus overcoming some of the current limitations of evolutionary robotics.

The Centre for Robotics and Neural Systems of the University of Plymouth (CRNS-Plymouth) and the Advanced Concepts Team of the European Space Agency ESTEC laboratories in Nordwijk (ACT-ESA) have joined forces in an innovative project on evolutionary robotics techniques applied to a Mars Rover. The scientific and technological rationale of this project was to integrate the methodological approach and expertise on evolutionary robotics and cognitive robotics of the CRNS-Plymouth team with the island evolution approach developed at ACT-ESA. The main aim was to demonstrate how such an integrated system enhances the automatic design of robust controllers for Rovers’ navigation tasks, including application to a complex problem demanding the integration of basic sensory capabilities with active vision. This project was funded by the ESA Ariadna programme, and was carried out between October 2009 and July 2010. The staff involved in the project were Angelo Cangelosi, Davide Marocco, Martin Peniak and Barry Bentley, from CRNS-Plymouth, and Christos Ampatzis, Dario Izzo and Francesco Biscani, from ESA-ACT. 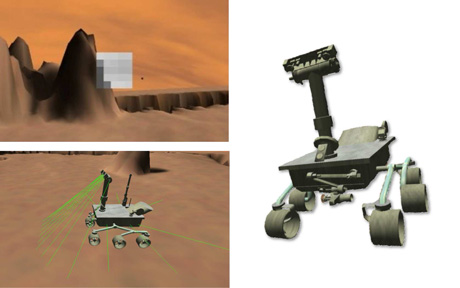 3D physics model of the rover (right), the position and orientation of the camera and infrared sensors (bottom-left) and fovea of the active vision system consisting of a matrix of 5x5 grayscale pixels.

Evolutionary Robotics promises the automatic design of neuro-controller for autonomous robots, but it barely copes with increasing task complexity, failing to deliver good solutions in a reasonable time. The innovative focus of this project was to test the hypothesis that the “island model” paradigm can complement evolutionary robotics techniques allowing for the design of complex robot controllers, thus overcoming some of the current limitations of these techniques. The island model is based on the theory of punctuated equilibria, and corresponds to a coarse-grained parallelization approach to genetic algorithms. Initially isolated populations, while evolving in parallel, exchange genetic material at a certain rate through migration of individuals (genotype), thus interacting with each other. As a result, not only do populations evolve faster, but their final performance is also improved.

To proceed with the above outlined experimentation, a new software tool integrating the island evolution model (PaGMO libraries – an open source software platform for Parallel Global Multiobjective Optimization) with the physics simulator model of the rover was designed. Three sets of simulation experiments were then carried during the project. The first was a benchmark comparisons study between island versus standard genetic algorithm experiments for an autonomous navigation task. The second study systematically varied the type and properties of the environment and navigation tasks to test the robustness of solutions evolved. In the third set of experiments, a complex navigation task based on active vision was investigated. Active vision experiments involved a simple camera whose directionality and focus the robot can actively control, and focussed on the integration of sensing of both local information (eg perception of sand/icy/standard ground surfaces through infrared sensors) and distal landmark information (active and autonomous control of the robot camera to identify relevant features).

This project led to a series of methodological and scientific results. One contribution was the extension and integration of the Mars Rover Simulator with the PaGMO library for the development and dissemination of an open source application on robotic island experiments. The study demonstrated the robustness/efficiency of the island approach to evolve controllers for autonomous rover navigation. Comparisons between island model and single population model on different tasks show the island model’s performance to be statistically better, producing improved results in terms of computational performance (island model is faster) and quality of the evolved controllers. This is an important step towards obtaining a functional and reliable tool to automatically generate intelligent controllers. The active vision experiments also show the feasibility of the proposed methodological approach for complex tasks and controllers. Evolved solution for active vision experiments led to robot’s neural controllers that autonomously orientate the robot’s camera to identify distal landmarks and local obstacles.

The results obtained in this study, and the methodological advances through the PaGMO/Rover simulator software tool, have the potential to lead to promising new research developments. One of the first directions of future work might regard the adaptation and testing of the autonomous navigation methodology to the physical rover robot platform. Further experiments on the active vision setup can lead to the design of autonomous navigation to a goal complemented with intelligent obstacle avoidance behaviour.

Please contact:
Angelo Cangelosi
Centre for Robotics and Neural Systems, University of Plymouth, UK
Tel: +44 1752 586217
E-mail: This email address is being protected from spambots. You need JavaScript enabled to view it.