Robot team work is typically a collaborative activity. Organising a robot team to undertake a search and rescue mission is an important and complex task. Agent-based technology provides a solution. We present preliminary work aimed at developing distribution strategies for a robot team using an agent-based model (ABM).

In urban environments, the deployment of multi-robot teams can be a challenge because communication between ground robots is difficult and GPS measurements may be unavailable. We believe that the cooperation of air and ground robot teams can provide better results in such situations. This is one of the reasons why robot collaboration is an exciting research topic and the distributed control of a group of robots has been the focus of much recent research. These robots can interact or cooperate through a communication network to accomplish certain complex tasks or sets of tasks. They can be considered as the extension of a person’s sense organs, such as their ears, eyes, or hands. 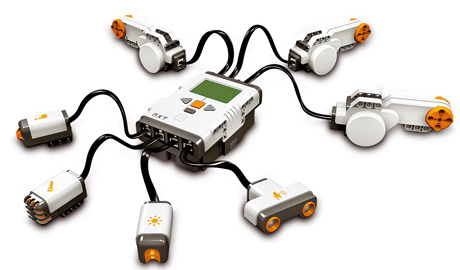 We present current work at the ELIOS Lab, Dept. of Biophysical and Electronic Engineering, University of Genoa aimed at deploying agent-based technology when developing air to ground robot distribution strategies. We are testing our system by simulating a search and rescue mission. For our ground-robot, we use two LEGO mindstorms NXT (Figure 1). The NXT bricks have a 64KB RAM main processor and a co-processor with 512 Byte RAM. NXT bricks come with multiple sensors, for example, touch, light, colour, compass and ultrasonic sensors. We design special NXT robots for different tasks which means our NXT robots are built on the basis of the role they play in the mission. This plasticity can increase our effectiveness in the tasks. 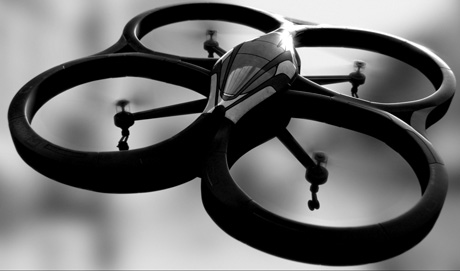 The reasons why we chose the quadrotors are:

The reason why we chose to use an air-ground robot team is because both micro aerial vehicles (MAVs) and micro ground vehicles (MGVs) are limited in their ability to search and transport objects or complete complex missions. The payload of MAVs is relatively small and they have difficulty in transporting objects; the speed of MGVs is relatively slow for performing rescue missions. We overcome this limitation by using the cooperation between the MAVs and MGVs, ie we use the speed of the MAVs and the payload of the MGVs to accomplish the tasks in our system (Figure 3). In order to make the system robust against robot failure, the robots will backup the data by using a broadcast protocol to send it to the on-site manager, a ground station with more powerful processors.

A mission runs as follows: First, the MAVs will be sent out to search for the objects. They will send the path information back to the manager on-site. This information will be useful to plan the paths of later missions. Meanwhile the processor on the MAVs will compute the path for collision avoidance with other objects or other MAVs. After finding a suspect object, the MAVs will make the first check based on its colour and shape. The manager will confirm the object on the basis of the images and data sent back by the MAVs and decide which MGVs should then be sent out. Similarly, the MGVs will proceed to the objects, sending the path information back to the base and avoiding potential collisions. On arrival at the location of the object, the MGVs will complete the task using their agent-based design. All the information and data will then be sent to a top manager by the on-site manager. The top manager can change decisions taken by the on-site manager if necessary.

Future research will be in two main directions. First, we want to enrich our set of ground and aerial robots. The actual five robots are too few to allow the team to split into sub-teams for the accomplishment of more difficult tasks. Furthermore, we want to develop a web protocol in order to let the top manager control more than one on-site manager in different locations.

Please contact:
Alessandro De Gloria
University of Genoa, Italy
E-mail: This email address is being protected from spambots. You need JavaScript enabled to view it.

Cai Luo
University of Genoa,Italy
E-mail: This email address is being protected from spambots. You need JavaScript enabled to view it.