One of the major scientific contributions of CompCog has been to provide a unified system to collate research methods and results across various animal species, including humans, and also artificial creatures (robots). The systematic collection of data produced by different research groups would enhance the study of social cognition in an operationally comparative way. In the project an on-line video tagging system has been developed. Another contribution has been the use of mobile robots to test the abilities of ethologists.

Cognitive sciences and computer science - artificial intelligence and robotics in particular - have been close related since the appearance of computers. Cross-fertilization between the two fields has been particularly beneficial for robotics, which has gained much from the cognitive sciences. There are many examples of robotic architectures based on cognitive science, starting from the very first robot, The Tortoise, built by Dr Walter in 1949.

On the other hand, robotics has helped cognitive scientists in a much more limited way. Robots have been used to test only a small number of theories, for instance verifying limited effects of joint attention, demonstrating such abilities as gazing at the person who is talking, etc. More recently, work on androids by Prof. Ishiguro has gained much attention, especially in the mass media. Ishiguro claims that contributions from robotics to cognitive science have not been significant because robots to date, have been robot-like, and appearance and behav iour cannot be uncoupled. He hypothesizes that using androids - robots that have an identical appearance to human subjects - will solve this problem.

Nowadays, robotic engineers could program robots to be able to pass any ethologist-designed test relating to visual attention, gaze following, joint attention, etc., providing the details of the test are known in advance. This is what computer scientists have been doing in recent decades. One can find “artificial multitudes” in any movie, which to viewers, are indistinguishable from real actors, artificial characters in any computer game that would pass the Turing test in that domain, even robotics pets that mimic real pets. But these robots are incapable of real “cognition”: They are simply programmed to mimic the external behavior of humans, pets, etc.

CompCog is a Research Networking Programme funded by the European Science Foundation, whose full title is “The Evolution of Social Cognition: Comparisons and integration across a wide range of human and non-human animal species”. This programme brings together 28 laboratories from eleven countries, and runs for five years from May 2008 to April 2013.

Its general objective is to develop “real” comparative cognition across a wide range of animal species (including humans) with a coherent theoretical background, unified terminology and standard methods, and to make it transparent for and integrated with other fields, like social sciences, genetics, physiology, animal welfare and robotics.

Its goals are also: to assist in training a new generation of researchers who are already endowed with the knowledge and experience that is needed for designing real comparative studies, to establish a unified, user-friendly depository database for the available comparative results, and consequently to make the field more transparent to, and integrated into, the main stream of biological research aimed at understanding the mind at various levels of biological organization ranging from genetics to neuroscience, and to make it accessible and informative to other disciplines such as robotics and social sciences by providing a comprehensive approach.

In the CompCog environment, we think that robotics could help cognitive science, not in testing a particular topic, but in verifying its research methodologies. In this way we propose to challenge ethologists to test their observational abilities to infer the internal organization, motivations, etc. of robots, and also their ability to design experiments.

The idea is to show a set of videos of a “pack of robots” in their “environment”, for instance a RoboCup team playing robotic soccer, and ask ethologists about the robots’ behavior: 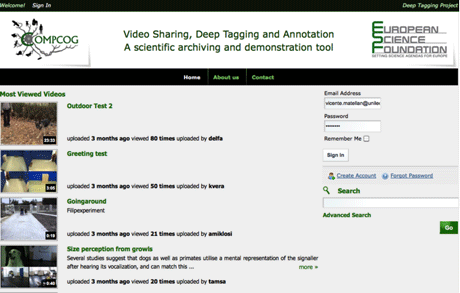 This has been usual in the training on animal behavior; students have to watch animal behaviour on videos and infer the organization of their behaviours. In this context, robotics videos can be included in the comparative mind database. In this case, programmers can provide the real internal organization, motivations, roles, etc. of the robots. These videos have been included in the Comparative Mind DataBase (CMDB) (see Figure 1).

CMDB is a module of the CompCog project that supports the inquiry using innovative, advanced information technologies and methods from philosophy of science, statistics, experimental design and data/text mining. Components include: data acquisition and description methods, data and text mining for conceptual analysis, ontologies for animal cognition, integrated tools for the design and analysis of experiments, and work towards the standards of experiments, their communication and evaluation concepts.

The problem of cross-comparisons and different markers points towards the necessity of a formal, flexible representation of animal data currently supported by ICT methods commonly called ontologies. Developing an ontology could also support and standardize many statistical comparisons