Smart Grids is a popular concept and there has been much discussion about the revolution that will be needed to cope with the construction of smart electrical grids. SICS has developed a comprehensive picture of what is required by the private end user who represents the end of the line. In a three-year project financed by the Swedish Energy Agency, SICS is investigating the possibility of "smart houses" from an energy-saving perspective.

This project was initiated less than a year ago and by summer a demonstration house with functioning systems for smart energy savings was already complete. The project’s name is rather dull – “System-wide IT network for increased energy efficiency in housing” – but the content is very exciting. It concerns the future of energy regulation at the end consumer level; that is to say, to the benefit of everybody.

The name "system-wide" describes the opening up of different subsystems so they can share and use information with each other. With current technology it is not possible for an alarm to affect the temperature control system, nor is it possible to read the indoor temperature on one’s TV-screen as these devices use different protocols to communicate. This has now been solved in an elegant way:

To avoid managing all these protocols, we have chosen to use IP throughout. This means that in certain cases, we have to adapt devices that still do not handle IP, but most of the time we try to find alternatives that already support IP. The advantage with IP is that there is support for IP in all programming environments, there are good support tools and all users and developers already use it, for example for the Internet, IP-TV or IP-telephony.

Today, IPv4 is mainly used for data traffic over the Internet, even though this standard is under-dimensioned and the addresses are simply running out. The new alternative, IPv6, was developed over ten years ago, but it has not really made a breakthrough. Calculations show that as little as 1% of all Internet traffic uses IPv6. The system being developed by SICS communicates directly via IPv4 as well as IPv6.

Since the Western world has already commandeered nearly all the IPv4 addresses, it is mainly the developing countries that have a greater share of IPv6 traffic today. With IPv6, there are in practice an infinite number of addresses available, which means that our system is well prepared for broad utilization and expansion in many different ways. 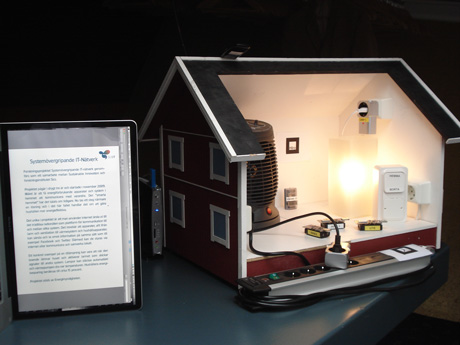 The smart house demo setup with a mini-PC for controlling lighting and heating. 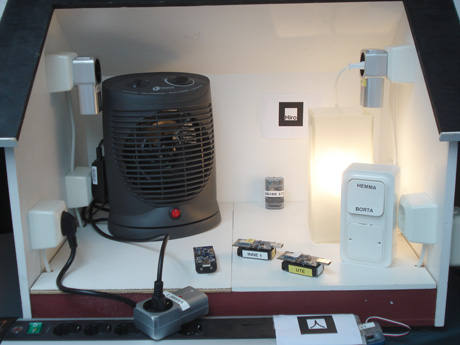 The smart house demo consists of several sensor nodes measuring temperature, light and power consumption. This data is used as input to the control system. All sensor data is collected over an IPv6 network.

SICS forecasts a future in which all electronic equipment in the home, such as TV, stereo, cooker, fridge, and freezer will have their own IP address. In the demonstration house, small sensor nodes were used that measured parameters such as energy consumption, temperature and light, and thereby a regulation system for the whole house’s functions could be demonstrated.

The basic concept behind the SICS system is that it will include a certain level of automation. Today, there are plenty of solutions that only consist of a display showing the energy consumption. It is up to the user to change his or her behaviour. Such systems, according to some studies, can reduce energy consumption by as much as 25%. However, this assumes the user is active and continues to steer his or her consumption, something that is not at all certain. As a rule, it is difficult to show how much is really saved and the commitment often diminishes after a while. Moreover, if you do not have direct resistive electric heating, then the heating is not included in such a system.

Heating is crucial for energy consumption; heating and hot water consume most of the energy in a household and has to be controlled irrespective of type. To optimize the consumption and create permanent improvements more than visualization is required. In the model with which SICS is working, all information is collected - even that related to the heating - and thereafter the equipment is controlled automatically.

The next step for the work group at SICS, together with the project partner SUST (Sustainable Innovation), is to carry out a number of pilot installations of fully functioning systems in normal homes. The technology has been developed and is functional, and now the extensive work with testing and evaluation remains.

We are out early with test runs of this type of system. The IP standard creates the preconditions for more accessible and less expensive equipment. In time, our aim is for totally automatic, intelligent systems that do not just help us reduce energy consumption but also improve the dwelling environment.

Please contact:
Joakim Eriksson, SICS, Sweden
Tel: +46 8 633 15 41
E-mail: This email address is being protected from spambots. You need JavaScript enabled to view it.