The goals of the project NAV-CAR are to enable lane-sensitive navigation for cars on motorways and to increase robustness for high precision positioning in specific environments such as urban canyons where satellite based navigation systems may fail. The challenge of the project is the technical realization of the accuracy vs. costs, which is met by using sensor fusion technologies and stepwise integration of car specific data.

Current satellite based vehicle information, navigation and tolling systems rely on a minimum number of satellites that are both visible and well distributed to compute geo-reference data at the accuracy promised by the operators.

Nevertheless, specific environments such as urban canyons, woodlands and mountainous regions, very often do not fulfil the requirements for a continuous and reliable satellite connection of the navigation system, leading either to wrong positional data or no data at all.

The goals of the NAV-CAR project are to increase robustness, improve accuracy and to enhance reliability in comparison to existing solutions in order to enable lane-sensitive navigation. 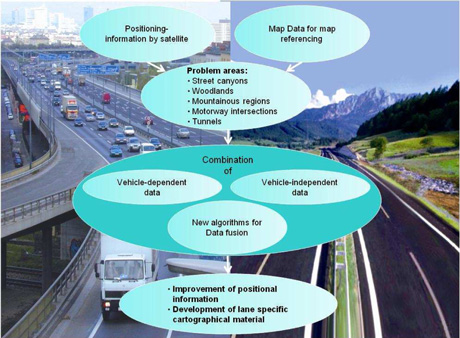 Figure 1: Focus of the project.

In NAV-CAR, positional information from navigational satellites is augmented by data collected by an in-car sensor network and combined with high precision map data in order to determine the actual lane in which the car is moving. This in-vehicle process will not only allow the correction of the signal provided by the navigation satellites but can also, to a certain extent, substitute missing signals, as may occur in tunnels, urban canyons and mountainous areas (see Figure 1).

Applications for NAV-CAR
Several European Research Projects develop and test ITS services dealing with the targeted improvement of safety and efficiency on European Roads (eg COOPERS, CVIS; SafeSpot). These projects integrate GPS, GLONASS and GALILEO as source for satellite navigation and positioning. In these projects a number of services were identified which are based on lane-dependent information. Some of these will be used in NAV-CAR in order to demonstrate the benefit of lane-sensitive navigation. The services selected for NAV-CAR are as follows:

Requirements
In order to gain lane-sensitive navigation the following precision requirements have to be met (see Figure 2):

Challenges
The challenge in NAV-CAR is the technical realization of the project. The approach we selected is based on multiple sensors using different levels of car integration (see Figure 3).
OBUs (on-board units) could receive relevant data from the vehicle itself (ie the CAN BUS), but these data are not standardized across the car industry as a whole. Thus, the integration of the OBU with each brand and type of car available is a timely and costly undertaking.

Therefore one objective is to improve the OBU performance by means of data that require no or minor vehicle integration (vehicle independent data), such as acceleration sensors, positioning via WLAN, Infrared, GPS and UMTS cells, etc., and to compare the results achieved with those to be achievable including vehicle-dependent data.

In NAV-CAR different sensors are used to gain both the required navigation accuracy and to guarantee the robustness of data in case of GPS failure, for instance. The sensors used in NAV-CAR are the following:

The data from these sensors is combined using sensor fusion and then compared with precise map data in order to determine the actual lane. 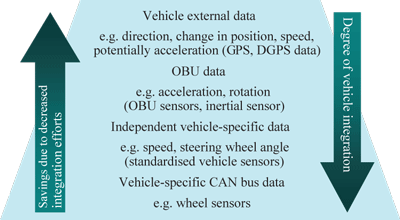 Status and Next Steps
The sensor platform which contains the sensors mentioned above has been accomplished and first test runs have been performed successfully. The next steps will be the evaluation of the sensor fusion software which is based on third party MatLab toolboxes. The sensor platform will be used to perform measurement drives in the car using (1) on an urban and (2) on an alpine motorway. The test data of these measurement drives will be evaluated using the software in order to calculate the gained navigation precision and the robustness of the system. One concrete result could be that the lane specific navigation is guaranteed for one or two kilometres in case GPS fails. Another interesting result is the gain of accuracy for different levels of car integration.