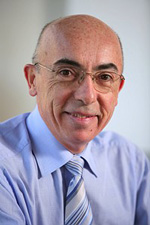 For some time, the Strategy Task Group (an elected subset of the Board of Directors) has been discussing the future of ERCIM. Indeed there is some pressure from more organisations to join ERCIM (the current construction is one member per country) and the current structure of an EEIG (European Economic Interest Grouping) of seven members plus thirteen associates is now inappropriate for the mission and objectives of ERCIM.

“ERCIM - the European Research Consortium for Informatics and Mathematics - aims to foster collaborative work within the European research community and to increase co-operation with European industry. For more than 20 years, ERCIM has a leadership position for cooperating for excellence in research and is a recognized expert in Information and Communication Technologies which are now a worldwide research and innovation priority”, said Michel. “Its impact on society is tremendous and the number of key players has increased exponentially. To maintain its position, remain THE recognized expert in Europe, and increase its impact on European strategy and policy, ERCIM has to evolve in particular its membership by attracting the best research performing organizations.”

“ERCIM has been also the European host of the World Wide Web Consortium (W3C). The evolution of Web standards is key to maintain an open Web and to lead it to its full potential. Transforming the consortium into a more long term international standardization organization is a challenging objective”.

At the recent Board of Directors meeting the following plan was approved:

The plan is to form the association by June 2011 when there will be elections for the President and VPs for the new organisation. At this time the relationship of the EEIG to the new ERCIM will also be determined.

Please contact:
Jérôme Chailloux
ERCIM Manager
E-mail: This email address is being protected from spambots. You need JavaScript enabled to view it.