A team from Warsaw University won the 31st annual World Finals of the ACM International Collegiate Programming Contest, sponsored by IBM and held at IBM Tokyo Research Lab on 12-16 March 2007.

An agreement on French-German cooperation in computer science was signed in Nancy on 7 February 2007. The signing ceremony was marked with a one-day scientific seminar at which scientists from the instituties involved presented current research results. This cooperation agreement will allow scientists of the respective institutes to pursue and intensify their cooperations by proposing joint research activities and by exchanging researchers and students. Moreover, it aims at promoting joint proposals for European research programs. Thus the greater border region, including Luxemburg and the regions of Wallonia, the Saar, and Lorraine has the potential of becoming a region of excellence in computer science.

As of 1 April 2007 CCLRC the ERCIM member organisation in the UK, merged with PPARC (Particle Physics and Astronomy Research Council), bringing together the science and technology for large facilities (including IT) in a new Research Council named STFC: Science and Technology Facilities Council. 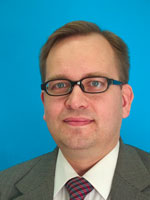 The Open Services Gateway Initiative (OSGi) Alliance is a worldwide consortium of ICT companies and research organizations that advances a process to assure interoperability of applications and services based on its component integration platform OSGi.