The demand for hydrocarbons and other mineral resources worldwide is increasingly met by tapping the vast seabed resources in ever more difficult and risky environments, like the abyssal oceanic depths or the arctic regions. The development of suitable means for safe underwater operations is a fundamental requisite for their sustainable exploitation, in particular on the delicate polar environments or the environmentally and socially stressed east Mediterranean region.

Maritime disasters leading to major pollution happen almost regularly every 2-3 years. However, it is the offshore drilling well blow-outs that have caused the major environmental disasters, like the IXTOC-1 in 1979 or the DEEPWATER HORIZON in 2010, in the Gulf of Mexico. Given that most of the new offshore hydrocarbon deposits are found under thick mineral salt layers, often several km below the sea-floor, the associated risks are very high. Hence, the community has to ensure that all necessary prevention and emergency intervention means are in place, especially in the sensitive arctic environment or in seas with densely populated, touristic coastlines like the eastern Mediterranean.

In the aftermath of the “PRESTIGE” oil-tanker disaster, a novel method for the containment of the pollutants directly on the shipwrecks, even at abyssal depths, was conceived by the author and patented by the European Commission. It consists of a large fabric dome (collector), solidly anchored at the sea bed, so as to cover entirely the pollution source and channel all the leaking oil, through a wide vertical tube (riser) to a large open bell-shaped reservoir (buffer bell) positioned 10-20 m under the sea surface so as not to be affected by the waves. Oil occupies the upper part of the bell and is periodically removed by a shuttle tanker while water escapes from the open bottom. The buoyancy of the reservoir keeps the whole system in tension.

The method, schematically depicted in Figure 1, is simple, entirely passive and weather independent. Extensive numerical simulations and scale experiments, in the frame the DIFIS (Double Inverted Funnel for Interventions on Shipwrecks) EC-financed collaborative project [L1], provided the proof of concept, the proper engineering solutions (Figure 2) as well as the technical and economic feasibility for interventions on ship wrecks lying on the seabed from few hundred meters till several km deep [1-3]. 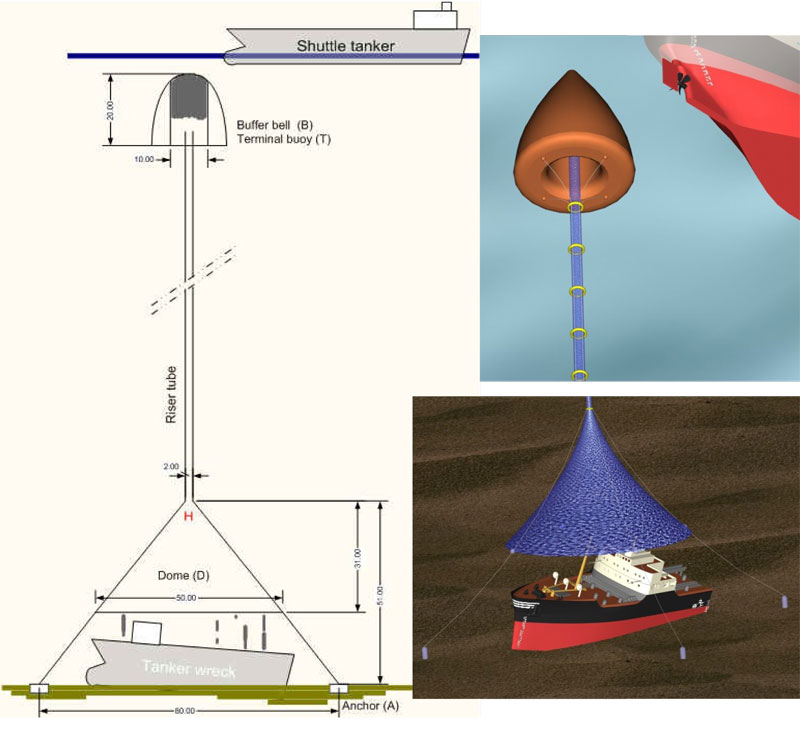 Figure 2: Design details of the buffer bell, the riser tube and its interface to the collecting dome (left) and the underwater deployment procedure (right).

The “DEEPWATER HORIZON” catastrophe triggered additional investigations on the applicability of the DIFIS method for containing deep offshore well blowouts. The main concern was the presence of gas that, under certain conditions, could compromise the stability of the system. Extensive 3-phase flow numerical simulations, using a variety of commercial and home-made codes, indicated that the presence of gas in the upward flow, even in significant quantities, would not be a matter of concern as long as the gas accumulated in the “buffer bell” is continuously evacuated towards the surface.

Concluding, the DIFIS system is by far the best way to intervene also on blown-out offshore wells in order to contain the pollutants right on the seafloor before they disperse on the seawater volume and reach the sea surface, where it is extremely difficult to deal with. It offers a range of advantages over the current state-of-art:

In the case of offshore installations, the speedy and cost-effective deployment of the DIFIS system can be ensured by prefabricating some standard components and by building some limited underwater infrastructure, like the anchoring points, together with the other seabed production installations.

Please contact:
Fivos Andritsos, Mechanical Engineer (PhD)
This email address is being protected from spambots. You need JavaScript enabled to view it.