Does the use of online platforms to share opinions contribute to the polarization of the public debate? An answer from a modelling perspective.

The process of formation of opinions in a society is complex and depends on a multitude of factors. Some relate to personal preferences, culture or education. Interaction with peers is also relevant: we discuss important issues with friends and change or reinforce our opinions daily. Another significant effect is that from the media: external information reaches and influences us constantly. The choice of the people we interact with, and of the news we read, is thus crucial in the formation of our opinions. In the last decade, the patterns of interaction with peers, and of news consumption, have changed dramatically. While previously one would read the local newspaper and discuss with close friends and neighbours, nowadays people can interact at large distances and read news across the world through online media. Social media in particular is increasingly used to share opinions, but also, as the Reuters 2018 Digital News Report shows, to read and share news. This means that the peer and external effects in the dynamics of opinions are becoming susceptible to influences from the design of the social media platforms in use. These platforms are built with a marketing target in mind: to maximise the number of users and the time they spend on the platform. To achieve this, the information that reaches the users is not randomly selected. A so called ‘algorithmic bias’ exists: we see the news related to topics that we like and the opinions of friends that are close to our opinions, so that we are driven to read them and come back to the platform. However, a question arises: does that interfere in any way with the formation of our opinions? Do we ever change our minds any more, or we just keep reinforcing our positions? Do we ever see things in a different perspective, or we are now closed in our little information bubbles?

A group of researchers from the Knowledge Discovery and Data Mining Laboratory in Pisa, and the Department of Network and Data Science of the Central European University, funded by the European Commission, are trying to answer some of these questions by building models of opinion dynamics that mimic formation of opinions in society.  Based on the evolution of opinions, a group of people can reach consensus, i.e. agreement on a certain topic, or fragmentation and polarisation of society can emerge. This process can be modelled by representing opinions with continuous numbers, and simulating interactions with specific rules to change opinions at regular intervals. The population typically starts from a random configuration and evolves in time to either consensus or a fragmented state. One very popular model for such simulations is the ‘bounded confidence’ model, where peers interact only if their opinion is close enough. In this model, clusters of opinion appear if the confidence is low, while for large confidence consensus emerges. This model has been modified to include algorithmic bias. Instead of selecting peers to interact with in a random way, they are selected with a bias: a person is more likely to choose to interact with a peer that has an opinion close to their own, while it will have a low probability of interaction with opinions far from their own.

Simulations of the algorithmic bias model show several results that suggest that online platforms can have important effect on opinion formation and consensus in society. First, the number of opinion clusters grows when algorithmic bias grows (see illustration). This means that online platforms can favour fragmentation of opinions. Second, this leads also to polarisation, where the distance between the opinions of the people is larger compared to the situation without algorithmic bias. Third, the changes in opinion are much slower when the bias is in operation. Even when consensus is obtained, the time to reach it becomes very long. In practice, this means that it could take years for people to agree on an issue, being in a highly fragmented state while this occurs.

These results bring important evidence that algorithmic bias may affect outcomes of public debates and consensus in society. Thus, we believe measures are required to at least stop its effects, if not  reverse them. Researchers are investigating means of promoting consensus to counteract for the algorithmic bias effects. In the meantime, users could be informed of the way platforms feed information and the fact that this could affect their opinions, and maybe the mechanisms implemented by the platforms could be slowly withdrawn. 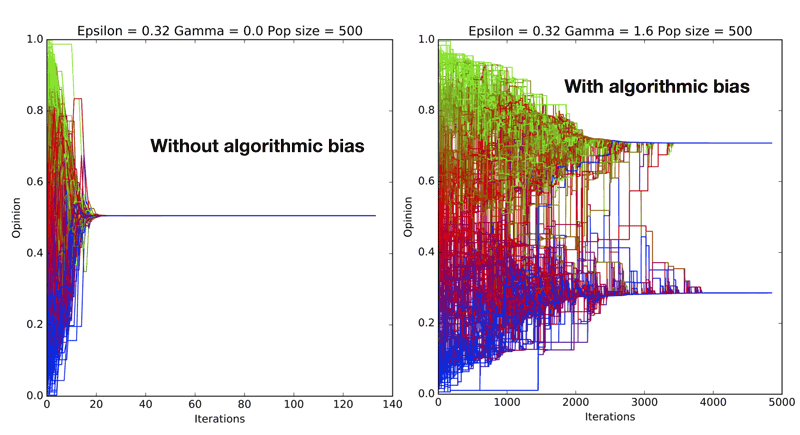 Figure 1: Simulation of opinion formation with and without the bias: The bias slows down the process and leads to the formation of two clusters instead of one.

Please contact:
Alina Sîrbu,
University of Pisa, Italy
This email address is being protected from spambots. You need JavaScript enabled to view it.