Training for radiological events is time consuming and risky. In contrast to real sources, a prototype augmented reality system lets trainees and trainers safely learn about the necessary detection, identification and decontamination steps.

The European Union funded H2020 TARGET project uses mixed reality technologies alongside serious gaming approaches to train security critical agents such as the police, fire brigades and Chemical, Biological, Radiological and Nuclear (CBRN) teams. CBRN response team training is the focus of this article, with the particular system described here using augmented reality to train radiological incident teams. The main advantages of using augmented reality for CBRN training are that the trainees continue to interact with the real world but can see invisible risks e.g. radiation. As there are no real radiation sources it is safer and cheaper. The systems developed within the project were a direct result of an extensive requirements capture process [1].

The training case comprises a two person CBRN team entering a scene where they have  to detect, find, classify and isolate simulated radiation sources. They also need avoid over exposure to the radiation sources and have to complete their tasks before their simulated oxygen level is depleted. Once they have completed this task they must enter the decontamination phase, which entails simulating the cleaning of their protective suits.

The system uses a range of technologies, for example the Microsoft Hololens augmented reality headset makes it possible to see augmented virtual holographic objects (holograms) in the environment integrated with the real objects perceived by the user, providing a mixed reality perception. The Pozyx indoor localisation system allows us to track movable objects in the scene. Any object can have a chosen simulated radiation isotope attached with an intensity Bq (Becquerels). A customised 3D printed simulated dosimeter (a replica of an “Identifinder” device) has been developed, it contains a Raspberry pi with a screen and a Pozyx tag to identify isotopes and measure the simulated radiation values. 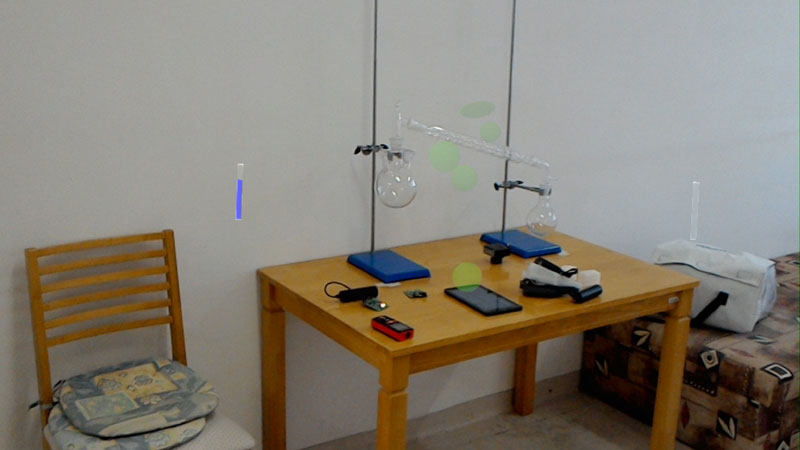 Visualisation of the radiation field is provided on two levels (see Figure 3), firstly the red particles show the critical zone, while the yellow particles show the external dangerous zone. The extent of the visualisation elements depends on the dose level of the source. For the visualisation of the contamination particles a transparent green spherical model is used. Also, each time a contamination particle comes into contact with a contaminable object a sound is emitted. These visual and aural clues can be activated or deactivated depending on the preferences of the instructor. 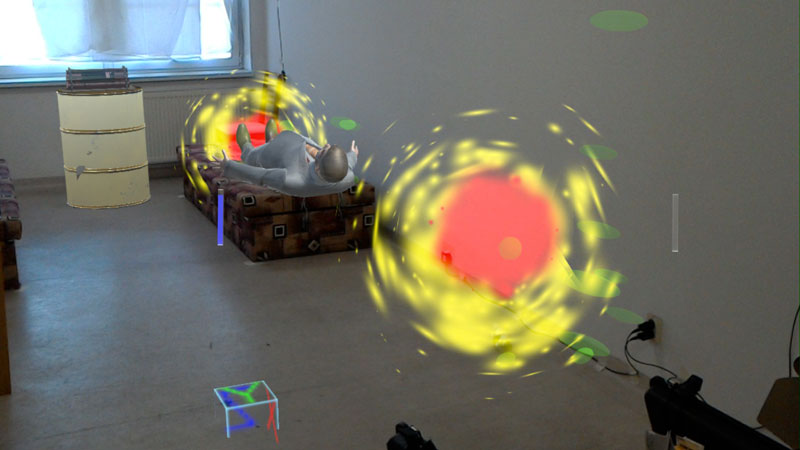 To enhance the learning and training experience, some visualisation elements were added. During the exercise, an oxygen level bar with a certain amount of time appears at the left side of the augmented reality display and an accumulative radiation exposure bar is shown on the right and becomes red when the cumulative dose reaches a dangerous level. Several gamification parameters are displayed by the system and these include: Accumulated Radiation Avoidance, Contamination Spread Avoidance and Time of Exposure (Figure 5). In order to validate the work, different versions of the system have been tested during two trials in Bratislava, Slovakia. The trials identified that the approach is useful for CBRN teams and also pointed to several areas of improvement.

This work has been carried out within the framework of the EU H2020 TARGET project. The project has received funding from the European Union’s Horizon research and innovation programme under grant agreement No 653350. We also acknowledge the other partners in the project for their assistance.

Please contact:
Rod McCall, Environmental Research and Innovation Department (ERIN), Luxembourg Institute of Science and Technology (LIST)
This email address is being protected from spambots. You need JavaScript enabled to view it.