Currently the digital twin (see Figure 1) is one of the emerging technologies in discussion in several domains; it is a concept of modelling assets with all geometrical data, kinematic functionality and logical behaviour using digital tools. The digital twin refers directly to the physical asset and allows it to be simulated, controlled and improved. According to Gartner today less than 1 % of physical machines and components “are modelled such that the models capture and mimic behaviour” [1].

Currently digital twins are discussed in Industry 4.0-working groups when talking about the asset administration shell [1] or industry 4.0-components. From our point of view, the digital twin will become a major topic for research in the coming years, because digital twins are not single objects or monolithic data models, but are composed of different aspects of digital representations, functionalities, models, interfaces etc. From a manufacturing and its engineering perspective, it is evident that digital twins perform different tasks, such as: 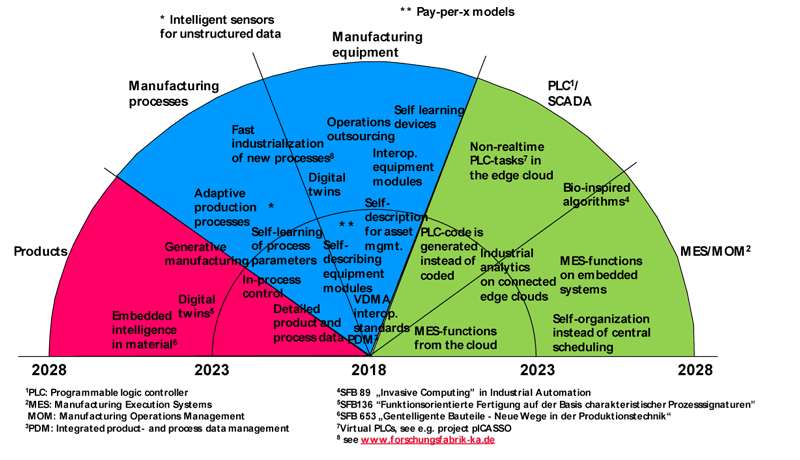 For Industry 4.0 and the digitisation of manufacturing digital twins are essential. Their content must be used through different stages of the lifecycle, within different types of platforms and various tools, from engineering to after sales services. The following use cases already show the potential benefits, e.g., to optimise products and processes almost during runtime:

From these first examples it is crystal clear that the application of digital twins will be very specific and always according to the use case; however, it must be possible to integrate the different part models of the digital twins easily based on their unique description.

Please contact:
Olaf Sauer
Fraunhofer IOSB, Germany
+49 721 6091 477, This email address is being protected from spambots. You need JavaScript enabled to view it.