Digital twins enable the analysis of systems under real world conditions using multiphysics models, sensors and bidirectional data connections between the digital and its physical twin. At the research lab of the Department of Computer Integrated Design (DiK) of Technische Universität Darmstadt, a digital twin demonstrator was developed that enables a real-time motion-structural simulation of a bending beam test bench. The approach provides proof of many of the publicised benefits through a comprehensible digital twin system.

Digital twins constitute virtual representations of physically existent systems. The exchange of data between digital and physical twin takes place through bidirectional data connections. The networking of technical systems, also called cyber-physical systems (CPS), is one of the key tasks of the digitisation of industrial production, which in Germany is being promoted under the term Industrie 4.0. CPS use embedded electronics, software, sensors, actuators, and network connectivity to collect, process, and communicate data about their condition or behaviour over wired or wireless networks. The ability to communicate allows the synchronisation of physical and virtual space and thus forms the basis for the creation of digital twins. The transmitted data regarding state, behaviour, or environment serve as input to multidimensional, physical models that make up the digital twin. The use of physical data collected by sensors in real space enables digital twins to analyse and simulate real conditions, to respond to changes, to optimise the operation of the system, and thus generate added value for the product usage phase. The processing of the data is hereby not accomplished using classical methods of data processing, but with methods of computer-aided technologies (CAx). The aim of this project is to demonstrate the application of digital twins using a cyber-physical bending beam test bench connected to a motion-structural model of the system, its digital twin. The demonstrator is located at the research lab of the Department of Computer Integrated Design of Technische Universität Darmstadt [L1] but can be accessed via a secure connection by any internet-capable device from anywhere in the world.

In step one of phase one, a simple bending beam test bench was developed. The bending beam was chosen because its physics are easily comprehensible thus making it ideal to demonstrate the potential of digital twin technology. The test bench (see Figure 1), the physical twin, consists of two linear actuators (a) in between which the bending beam (b) is clamped. Two load cells (c) are integrated into the holding fixture on one side to measure the resulting force. The displacement is calculated as the difference between the actuator positions. The control unit (d) is set atop the frame. In step two, the mechatronic test bench was transformed into a cyber-physical system by adding a microprocessor and a communication interface and connecting it to an Internet of Things (IoT) platform using the MQTT messaging protocol. Through a dashboard on the IoT platform, the linear actuators can be controlled and the sensor data can be visualised on any authorised device connected to the internet. In step three, an isolated finite element model of the bending beam was modelled and also connected to the IoT platform through the application-programming interface of the CAD-system. At this point, a human user could run a bending beam test through the dashboard on both the physical system as well as the digital twin using only a smartphone. The methods and results of this first phase are published in [1]. 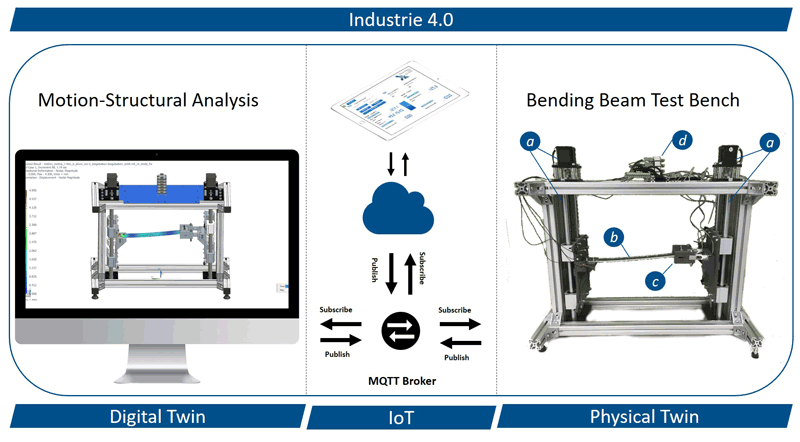 Figure 1: Schematic of demonstrator architecture. Physical and digital twin are connected via MQTT broker with each other and an IoT platform. Both twins can be controlled from any internet capable device. The test bench consists of: linear actuator on each side (a), bending beam (b), load cells (c) and control unit, microprocessor and network interface (d).

In phase two, a motion-structural analysis model of the entire test bench was developed. Motion-structural analysis combines the process chains of multi-body simulation (MBS) and finite element analysis (FEA). MBS calculate the dynamic movement of an assembly and are used to determine motion sequences, joint positions and collision areas under the consideration of the physical constraints. Originally, in MBS the elastostatics of individual components are neglected. However, in motion-structural analyses, the motion simulation calculates reaction forces and loads on the individual components, which then serve as input into a structural FEA. The additional chaining provides more accurate component strength results than pure FEA under self-defined load cases and increases the understanding of the performance of components in their operating environment. The motion-structural model was similarly connected to the IoT platform. The operator can now control the actuators individually and the digital twin will mirror the behaviour of its physical twin as well as visualise additional data, such as actual stress and deformation characteristics during usage. At present, the real-time capability of the entire system is limited by the performance of the workstation running the motion-structural simulation.

The demonstrator is part of the project “Smart Components within Smart Production Processes and Environments (SCoPE)” within the Brazilian-German Collaborative Research Initiative on Smart Connected Manufacturing (BRAGECRIM) [L2] funded by DFG. Other institutes involved in this project are the Laboratory for Computer Integrated Design and Manufacturing of the Methodist University of Piracicaba and the Department of Production Engineering of the Polytechnic School of the University of Sao Paulo.

Please contact:
Sebastian Haag, Technische Universität Darmstadt, Germany
+49 6151 16 21843
This email address is being protected from spambots. You need JavaScript enabled to view it.