Linked data technologies provide advantages in terms of interoperability and integration, which, in certain cases, come at the cost of performance. The Web Observatory, a global Web Science research project, is providing a benchmark infrastructure to understand and address the challenges of analytics on distributed Linked Data infrastructures.

The evolution from the Web of documents to the Web of data, social networks, and crowdsourcing has opened up new opportunities for innovation driven by analytics on public datasets, on online social network activity, as well as on corporate or private datasets [1]. These opportunities are evidenced by the emergence of a number of Web Observatories [2] that not only collate and archive, but attempt to provide analytics on such datasets (http://www.nextcenter.org:8080/ugcp/live/observer, http://www.truthy.indiana.edu).

These developments have been accompanied by an evolution of data literacy that has been taking place in parallel; people are no longer just consumers of documents on the Web but also contributors of content, data, and applications. The open data movement has shown the potential of crowdsourcing data and applications, while linked data technologies have established their potential for dataset interoperability and integration. The basic associative structure of linked data has advanced the idea of regarding the Web as a global dataspace that, in the future, may be queried as if it were one giant database. Dataspaces are a generic data management abstraction, which helps to derive and maintain relationships between a large number of heterogeneous but interrelated data sources. Relationships are regarded as integration hints until they are reviewed and approved. The overall data management and integration effort is distributed among various stakeholders and performed in an evolutionary fashion [3].

Some of those challenges are explored as part of the Web Observatory (WO) project, which was initiated under the auspices of the Web Science Trust (WST, http://webscience.org). The WO aims to provide a distributed global resource in which datasets, analytic tools and cross-disciplinary methodologies can be shared and combined to foster interdisciplinary research in the context of Web Science [2]. This effort involves many different communities including the Web Science Trust network of laboratories (WSTnet, http://webscience.org/wstnet-laboratories/), other major research groups in this area, government agencies, public sector institutions, and the industry. The WO project has grown as a bottom-up effort, and aims to enable interoperability among datasets and analytics on a large, distributed scale. It involves the crowdsourcing, publication and sharing of both datasets, and of querying, analytic or visualisation tools. At the same time, it involves the development of appropriate standards to enable the discovery, use, combination and persistence of those resources; effort in the direction of standards is already underway in the W3C Web Observatory community group (http://www.w3.org/community/webobservatory/).

The Web Observatory infrastructure that is deployed at the University of Southampton includes different data-store technologies, however, a significant part of it are Linked Data stores. To that end, the infrastructural deployment involves (i) converting large datasets into 5-star linked data formats (http://www.w3.org/DesignIssues/LinkedData.html), (ii) supporting distributed queries over Linked Data stores, and (iii) supporting analytic and visualisation tools over distributed data stores and datasets. Essentially, this infrastructure (shown in Figure 1) will not only provide for valuable analytics over distributed resources but it will also provide for benchmarking analytics on Linked Data. 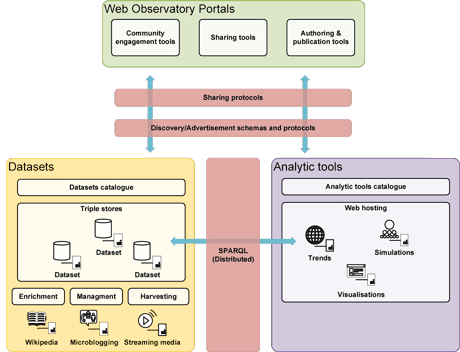 The datasets that are made available in Linked Data formats for this infrastructure include open data, licensed data and private data that can be accessed only by authorised parties. They include microblogging activity, access to Web 2.0 services (such as Wikipedia), Wellbeing data, and Web of data services (such as USEWOD). Given the volume of some of these datasets (e.g. microblogging data) and the use of diverse and distributed data stores, different approaches to optimisation for the performance of analytics are explored. These involve:

As well as creating a platform for Web Science research, the Web Observatory project will provide insights into performance and optimisation for analytics over distributed Linked Data infrastructures on varying scales of data store size and distribution. It will propose appropriate approaches to data representation, distributed queries and integration in such environments. Contributions to standardization for Web Observatories and Linked Data can also be anticipated. The biggest test for this activity is the extent to which Linked Data infrastructures can be used not only in an efficient manner but also to support researchers across disciplines engaging in interdisciplinary work.

Please contact:
Thanassis Tiropanis
University of Southampton
E-mail: This email address is being protected from spambots. You need JavaScript enabled to view it.