At the core of most cybercrime operations is the attacker's ability to install malware on Internet-connected computers without the owner's informed consent. The goal of the MALICIA project is to study the crucial role of malware in cybercrime and the rise in recent years of an “underground economy” associated with malware and the subversion of Internet-connected computers.

At the core of most cybercrime operations is the attacker's ability to install malicious programs (ie malware) on Internet-connected computers without the owner's informed consent. Malware includes bots, viruses, trojans, rootkits, fake software, and spyware. Malware enables attackers to establish a permanent presence in the compromised computer and to leverage it for their cybercrime operations. The target of these operations may be the compromised computers themselves eg stealing an organization's intellectual property or a user's banking credentials, or third parties. In the latter case, the compromised computers are simply assets, which the attacker employs to launch malicious activities such as sending spam, launching denial-of-service (DoS) attacks, faking user clicks on online advertisements (ie click-fraud), or simply as a stepping stone to hide its location.

The goal of the MALICIA project at the IMDEA Software Institute is to study the crucial role of malware in cybercrime and the recent rise of a far-reaching “underground economy” associated with malware and the subversion of Internet-connected computers. Gone are the days where attackers compromised computers and built malware to show off their skills to peers. These days, the malware ecosystem revolves around cybercrime and the monetization of compromised computers. 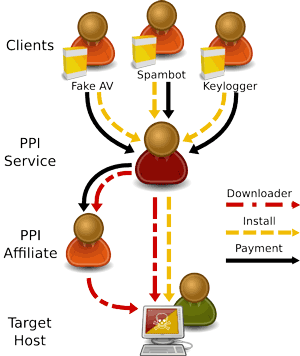 As the malware ecosystem has grown larger and more profitable, specialization has come to the marketplace. Attackers have understood that tackling the entire value-chain from malware creation to monetization poses a daunting task requiring highly developed skills and resources. As a result, specialized services have been created at all stages in the malware-monetization chain, such as toolkits to automate the construction of malware, program encryption tools to evade antivirus (AV) software, “bullet-proof” hosting, and forums for buying and selling ill-gotten gains. Specialized services lower the barrier to entering the malware ecosystem. However, defenders can also take advantage of specialization since disrupting the specialized services disrupts the different malware operations using them.

As a first step in the MALICIA project, we have collaborated with researchers at the University of California, Berkeley and the International Computer Science Institute to investigate the commoditization of malware distribution in the form of pay-per-install (PPI) services. PPI services offer criminals a simple way to outsource the distribution of their malware. The clients provide their malware to the PPI service and select the number of desired installations (called installs) in each geographical area. The PPI service takes care of installing the malware on compromised computers in exchange for a small fee that ranges from $180 for a thousand computers in some European countries and the US, down to $7 for a thousand computers in Asia.

To understand the PPI market we infiltrated four PPI services. For this, we developed infrastructure enabling us to (1) interact with PPI services by mimicking the protocol interactions they expect to receive from affiliates, and (2) collect and classify the malware being distributed by the PPI services. Using this infrastructure we harvested over a million malware programs and classified them by malware family as well as monetization methods. Our analysis revealed that of the world's top 20 malware families, 12 employed PPI services for their distribution. It also revealed that some malware families exclusively target the US and a variety of European countries. The monetization methods in use are varied including: spam, installing fake antivirus software, information-stealing, denial-of-service, click-fraud, and adware.

Much remains to be learnt about the malware ecosystem and the specialized economy supporting cybercrime. Our current work strives on deepening our understanding of other parts of the ecosystem. One overarching goal is evolving malware analysis from understanding what a malware program does, to also cover why it does it, ie what role the malware program plays in the cybercrime operation where it is used.