by Evangelos Markatos and Herbert Bos

For many years, cyber attackers have been one step ahead of the defenders. The asymmetric nature of the threat has led to a vicious cycle where attackers end up winning. SysSec, a new Network of Excellence in the area of Systems Security, attempts to break this vicious cycle and encourages researchers to work not on yesterday’s attacks but on tomorrow’s threats, to anticipate the attackers’ next move and to make sure they are prepared.

Over the past decade we have seen a large number of cyber attacks on the Internet. Motivated by financial profits or political purposes, cyber attackers usually launch attacks that stay below the radar, are difficult to detect, and exploit the weakest link: the user. We believe that the core of the problem lies in the nature of cyber security itself: in the current practice of cyber security, most defenses are reactive while attackers are by definition proactive. Cyber security researchers usually chase the attackers trying to find one more defense mechanism for every newly created attack. Thus, we are facing an asymmetrical threat: while attackers have all the time in the world to choose when and where to strike minimizing their cost, defenders must respond fast, within narrow time constraints, and at a very high cost. Each new round of attack-and-defense drains energy from the defenders, leading them down a vicious cycle which will eventually wear them out. It seems that the only way to build effective defenses is to break this cycle, by changing the rules of the game, by anticipating the moves of the attackers, and by being one step ahead of them, through (i) identifying emerging vulnerabilities, and (ii) working towards responding to possible attacks before they appear in the wild. In this aspect, the recently created SysSec Network of Excellence takes a game-changing approach to cyber security: instead of chasing the attackers after an attack has taken place, SysSec studies emerging threats and vulnerabilities ahead of time. The network’s main thrusts are to identify a roadmap to work on threats and to build infrastructure to boost education in system security—to provide the expertise needed to deal with these emerging threats. 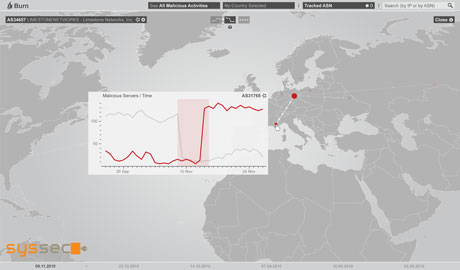 Figure 1: SysSec's BURN interface visualises malicious activities in autonomous systems---in this case, the number of malicious servers as a function of time for a network in Germany exhibits a sudden drop, whereas we find a specular sudden step in a network in France. BURN makes it easy to correlate this type of events visually.

Roadmap
With the collaboration of the research community, SysSec has already produced a research roadmap (http://syssec-project.eu/roadmap1) which outlines some of the important areas the community feels we should focus on. In the first year, the project selected five categories:

With the help of experts organized in working groups, SysSec updates its roadmap yearly to reflect new threats and priorities.

Education
Having realized the lack of educational material in the area, SysSec further aims to establish a center for academic excellence in the area and has started designing a common curriculum on cyber security, focusing mostly on the production of slides and lab exercises, which are particularly hard to design and set up. A first version of the curriculum along with course material is expected to be ready by September 2012. It will be open to universities throughout Europe and will help to set up a state of the art cyber security curriculum to train the next generation of experts.

We underline that besides SysSec several other projects aim to map the research landscape in cyber security. However, with a clear focus on system security and the development of usable course material, we believe SysSec occupies a unique and valuable niche. SysSec may be contacted at This email address is being protected from spambots. You need JavaScript enabled to view it., may be followed in twitter (twitter: syssecproject) and may be found in Facebook (http://www.facebook.com/SysSec).

Please contact:
Herbert Bos, VU University Amsterdam, The Netherlands
Tel: +31-20 598 7746
E-mail: This email address is being protected from spambots. You need JavaScript enabled to view it.

Evangelos Markatos
FORTH-ICS, Greece
Tel: +30 2810391655
E-mail: This email address is being protected from spambots. You need JavaScript enabled to view it.