Advances in technology and a steady orientation of services toward the cloud are becoming increasingly popular with legitimate users and cybercriminals. How frequently is sensitive information leaked to the public? And how easy it is to identify it amongst the tangled maze of legitimate posts that are published daily? The underground economy and the trade of users' stolen information are once again rising to the surface and mutating into a bazaar under the eyes of everyone. Do we have to worry about it and can we do anything to stop it?

Unfortunately, as along with the legitimate use of such services comes their inevitable exploitation for illegal activities. The first outbreak occurred in late 2009, when roughly 20,000 compromised Hotmail accounts were disclosed in a public post. Many other sensitive leaks followed shortly thereafter, but it is with the illegal activities of the hacker groups Anonymous and LulzSec that such security concerns reached a much wider audience [1].

The list of compromised accounts (ie username and password pairs) is the most commonly recorded stolen sensitive information (685 posts with 197,022 unique accounts). Such lists are often packed with references to where these accounts were stolen and the websites where they would be valid, giving miscreants (or just random curious readers) an easy shot. Such information enables us to shed some light on previous security trends and weaknesses [2] (eg password strengths and credential reuse). For instance, more than 75% of such passwords were cracked in a negligible amount of time, pointing out that users still rely on poorly chosen or weak passwords.

Similarly, posts of leaked database dumps often include references to the attacked servers, precise information on the exploited vulnerability and clear indications of the tools used to perform the attack, providing interesting insights into the attackers’ methods.

Information leaked by malware was responsible for 121 posts with 12,036 unique accounts. Such posts report very precise information associated with the leaked credentials, ie the URL of the website for which the account is valid, the program from which they were stolen, an IP addresses, a computer name and a date.

As previous researchers have done [2], we evaluated the potential value of this sensitive information on the black market [3]; prices and values are reported in Table 1.

Table 1: Prices and values of goods on the black market

As outlined above, some leaked posts linked to shell installed on compromised servers. To better understand the threat posed by the public disclosure of such information, we evaluated the bandwidth capacity (using a geo-location database) these shells may generate in a DDoS attack. Out of more than a hundred shell-related posts, we extracted roughly 31,000 shell-related URLs (5,011 unique, 4,784 of which valid). Such shells are installed on servers located in 118 different Countries (as shown in Figure 1), with the top five referring to USA (1074), Germany (629), The Netherlands (219), France (166), and UK (164). The aggregate computed bandwidth is 23.3Gbps, comparable to that of a small botnet. 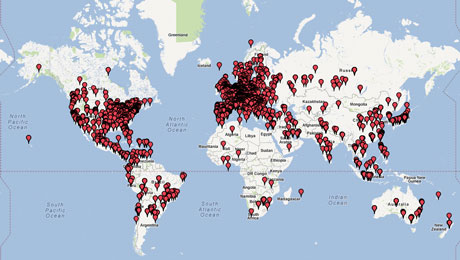 Our analysis reported 121 posts containing stealer malware dumps. We identified was roughly 14,000 dumps (12,036 of which were unique). Owing to the structured nature of these dumps, it was possible to gather precise statistics (omitted from this article due to space constraints). Most of the websites were about gaming, social networking, and file sharing.

In conclusion, our ongoing research effort showed that sensitive information is easily and publicly leaked on the Internet. The automatic identification of such information is not only an interesting research topic, as it sheds insights on underground economy trends, but, if properly enforced, it may allow us to detect and contain the damage caused by malicious leaks.

Please contact:
Lorenzo Cavallaro
Royal Holloway, University of London
Tel: +44 1784 414381
E-mail: This email address is being protected from spambots. You need JavaScript enabled to view it.