Truly intelligent technical cognitive systems should be able to operate autonomously, interact naturally with their environment and the humans therein, and be adaptive to changing situations and contexts, including the user’s preferences and needs. Currently, an encouraging spectrum of many isolated elements in the area of cognitive systems is realizable, including vision, speech, learning, decision making, planning and motor control. Nevertheless, the focus of these developments is mainly on performance in well defined, narrow domains. Successful attempts in building artificial, intelligent cognitive systems are still mostly restricted to systems designed for ‘sunshine’ environments having limited scope and performing simple tasks. The transferability of the developed skills and abilities to varying contexts and tasks without costly redesign of specific, ad hoc solutions is still impossible. In the future, research efforts must be devoted to rich cognitive challenges which are measurable and scalable in open ended scenarios under changing conditions, and to the development of measures, metrics and benchmarks that highlight and focus on both transferability and performance. 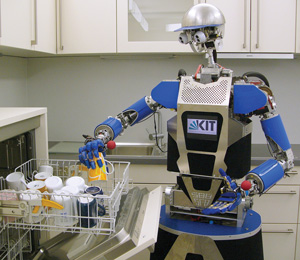 Image: ARMAR-III, a humanoid robot of the Karlsruhe Institute of Technology developed by the Collaborative Research Center on humanoid robots (SFB 588), funded by the German Research Foundation (DFG), as assistance robot in human-centered environments.

Challenges
Current challenges in the area of intelligent cognitive systems can be summarized as follows:

Research Themes
New approaches are needed to cognitive system development, focusing more on understanding processes that lead to autonomous growth and development than on system development. Semantics will arise from the interaction of an agent with its environment and with other agents.

Processes and representations for emergence
An important aspect for future cognitive systems is the definition of morphogenetic processes (processes that cause an organism to develop its shape) for information processing. This takes into account cooperation, stabilization, consolidation, focusing, categorization and mode selection. Autonomous, interactive and incremental learning and co-developmental approaches will be a key element in the development of processes for emergence. For this purpose, one has to study how sensorimotor experiences can be organized into appropriate data structures that allow sensorimotor learning at different levels of abstraction. Sensorimotor knowledge is gained by humans from childhood on, when children start to explore the space around them with seemingly random movements. This type of learning is the focus of developmental approaches, which have gained a lot of attention in robotics in recent years.

Emergent cooperation
Cooperation between agents must be based on the principles of alignment, entrainment, imitation, sharing, anticipation and proactive interaction. Guiding principles of cooperative decision making and role assignment in cognitive ensembles must be investigated to bootstrap natural communication and language generation. New theories of interaction should be developed to enable human-robot, human-human, robot-robot and other forms of interaction. The goal is to develop autonomous, interactive agents that operate within human environments and play a beneficial role in the daily lives of people. A key aspect in this field is multimodal interface technology, which allows humans and their environments to be ‘observed’ by recruiting signals from multiple audio-visual sensors.

Embodiment for guiding design
The development and emergence of cognition relies on artificial embodiments having rich perceptual and motor capabilities. Biologically inspired robot systems with such capabilities therefore represent the most suitable experimental platform for studying cognition. Body morphology of artificial cognitive systems should be inspired by biological systems, and the cognitive system should be able to learn its own body schema and cope with morphological changes arising through physical interaction with the environment. The following technologies need to be further developed to achieve these goals: artificial skin, soft and compliant mechanisms, new sensors, new energy-efficient actuation methods and on-chip multi-core systems. Humanoid personal robots are examples of artificial cognitive systems and a key growth industry of the 21st century. The big challenge is the advancement of robotic technology to the point where interactions between humans and robots run smoothly and robots are able to fulfill roles in the human living space.

The challenges for the development of humanoid robots also hold for robot ensembles. The vision of multiple, inexpensive robots operating in concert to solve complex and dynamically changing tasks has not yet been achieved. From a scientific/technological perspective, the two major challenges consist of developing efficient and general models of collective operation and conceiving hardware for disposable and collective operation. Although many models of collective operation (swarm intelligence) exist, they tend to be applicable only to specific robotic hardware and tasks. The big challenge is to capture principles of collective operation, such as altruistic cooperation, dynamic division of labor and emerging communication that are applicable to a wide set of robotic platforms and tasks. Existing models in the biological literature are not easily applicable to a real robot. For example, a model often used to explain division of labor in insect societies implies an updated and global knowledge of the needs of the colony, which is not realistic for a robot with only imprecise and local sensory information. It is therefore necessary to bring together scientists from biology, control theory and robotics to develop principles and algorithms that hold in the reality of specific robots and animals; and at the same time are general enough to be easily applicable to novel platforms.

Apart from theories of cognition, special emphasis must be put on experimental studies, approaches for comparison, analysis, and synthesis of various cognition paradigms. Additionally, shared complex platforms with standard/open software are required which on the one hand allow researchers from different fields to evaluate their theories and on the other hand provide a framework for benchmarking of different algorithms. Despite its fundamental importance, systematic benchmarking is still extremely difficult. Experimental studies of intelligent cognitive systems need test-beds that allow the evaluation of behaviors and results at system level rather than focusing on the performance of single component algorithms. Such test-beds together with common repositories must be provided for use by the research community. Key research activities in the future should be devoted to the definition of rich cognitive challenges which are measurable and scalable in open-ended scenarios under changing conditions and to the development of measures, metrics and benchmarks that highlight and focus on transferability as well as performance.

Integrative Studies of Cognitive Systems
Europe has the potential to play a leading role in the analysis and modeling of cognitive systems due to the leading position of European research in many fields such as computer vision, neuroscience, cognitive science and robotics. In Europe we are in particular able to gather the required critical mass of leading scientists in interdisciplinary consortia, thus making it possible to address challenges of scientific as well as commercial relevance. However, the existing expertise in information theory, neuroscience and social sciences can be more strongly bundled to provide better theoretical foundations towards understanding the processes and underlying mechanisms on which cognition builds. It is hoped that through extensive international collaboration, a fruitful cross-fertilization will emerge, giving technical oriented scientists new inspiration from biology and providing cognitive scientists with new ways to prove and evaluate their biological models. Clearly, significant progress can only be made through a more intensive dialogue among researchers from the fields of natural and artificial cognitive systems.

Within this context, ERCIM has run the FET “InterLink” project (Oct 2006 - May 2009, http://interlink.ics.forth.gr/) which aimed at advancing knowledge in Europe in three strategic areas, including Intelligent and Cognitive Systems. Interlink has formulated the research priorities that will create the scientific basis for concrete new technologies to be developed in the long run. Its recommendations are based on a sound cross-disciplinary perspective and, importantly, they transcend the European dimension towards global international collaboration. The visions exposed in this preface are essentially part of the InterLink project results. They vividly show the need to build new bridges across disciplines, so that next generations of researchers will be able to evolve in the more challenging, but so much more enriching and rewarding landscape of interdisciplinary work.

Please contact:
Antonis Argyros, FORTH-ICS, Greece
E-mail: This email address is being protected from spambots. You need JavaScript enabled to view it.