by Daan Crommelin and Jason Frank

The multiscale character of many natural systems poses a major challenge for computational studies. Often the variables of interest are macroscopic: researchers care about phenomena on large spatial scales and long timescales, not about the details of the microscopic (small-scale) behaviour. However, if the small scales do not merely perturb the large scales but fundamentally alter their behaviour, it becomes impossible to simulate macroscopic behaviour without taking into account microscale influences. Resolving the microscales explicitly usually requires such high model resolution that it becomes computationally infeasible to do sufficiently long simulations of the macroscopic behaviour (or even to simulate the macroscales at all). One approach to this problem is to use stochastic methods to represent the small scales, thereby making the macroscale simulations feasible. 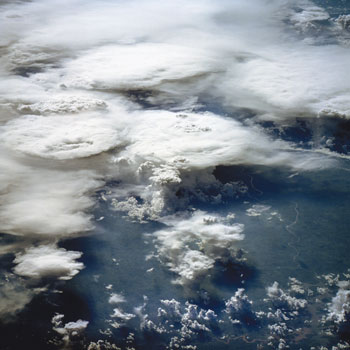 Convection in cumulus clouds is the major source of vertical transport of heat and moisture in the atmosphere. Reflection and absorption of solar radiation by clouds is important for the global heat balance. Explicit modelling of convection requires 50 metres model resolution, whereas global atmosphere models used in climate science have resolutions of 100 kilometres and more. (Image by NASA-JSC).

The question of how to represent unresolved scales is well known in the study of turbulent systems such as the atmosphere-ocean system and other systems involving fluid flow. ‘Microscopic’ processes such as small-scale turbulence or cloud formation have a major impact on ‘macroscopic’ (planetary-scale) phenomena in the atmosphere and oceans. For explicit modelling of atmospheric convection processes and cloud formation, a model resolution of better than 50 metres is required. However, models for weather forecasting and climate studies have resolutions that are orders of magnitude coarser than this: the state-of–the-art operational model at the European Centre for Medium-Range Weather Forecasts (ECMWF) was upgraded to 16 km horizontal resolution as recently as January 2010. The atmospheric components of climate models, because they are used for simulations over much longer timespans (years to decades, or more), have horizontal resolutions that start at 100 km.

Another area in which this question is highly relevant is molecular dynamics. Straightforward simulations of conformation changes of large molecules (which are important to understand the chemical properties of these molecules) are slowed down enormously by the need to account for fast, small-scale motions and vibrations of the molecules. These fast motions are not particularly interesting in themselves, but they can trigger changes in the conformation of the molecules.

Formulating a good representation of (collective/aggregated) microscale influences on macroscopic, coarse-grained model variables is a major challenge. In the group Dynamical Systems and Numerical Analysis at CWI Amsterdam, stochastic approaches to meeting this challenge form an important research theme. The feedback of microscales into macroscales is often non-deterministic: a given macrostate can elicit different responses from the microscales at different times; this can be due to chaotic dynamics or inherent stochasticity at the microscopic scales. This uncertainty calls for a stochastic representation of the microscopic feedback.

Among the various activities at CWI relating to this topic, one line of research concerns so-called dynamical thermostats. Thermostatting is a well-known technique in molecular dynamics studies, but its use in fluid-dynamical simulations is rather new. The idea is to view the resolved flow model as being in contact with a reservoir of subgrid scale vorticity. Instead of modelling the unresolved flow itself, the thermostat models the energy flux between the resolved and underresolved motions in such a way that the equilibrium statistical mechanics of the resolved dynamics is preserved. In this way a statistically consistent numerical closure is obtained.

Another approach being developed at CWI aims to represent microscale influences locally in space by Markov processes which are conditioned on resolved model variables. Microscopic phenomena are represented by networks of stochastic processes (Markov chains), coupled to differential equations for macroscopic variables. The coupling goes both ways: micro-to-macro and vice versa. The properties of the Markov chains are estimated from data. This interplay between stochastics, statistics and dynamics provides a new and promising computational strategy for the study of multiscale systems. It is currently being applied to the representation (‘parameterization’) of atmospheric convection in a recently commenced collaborative project involving CWI, the Royal Netherlands Meteorological Institute (KNMI) and Delft University of Technology.