One of the major aims of the ContraCancrum Project is to develop a composite multilevel platform for simulating glioma development as well as tumour and normal tissue response to therapeutic modalities and treatment schedules. By efficiently predicting the evolution of a tumour and how this alters with different therapeutic schemes, clinicians could optimize the disease treatment procedure in the patient's individualized context.

Glioma is the most malignant type of brain cancer. Glioma cells invade into neighbouring normal tissues so rapidly that all common imaging techniques (MRI, CT, PET) cannot detect them. Even if a tumour is detected using medical imaging, there will be glioma cells dispersed beyond this area. Thus, if the clinicians apply therapeutic schemes only in the imaged tumour, the remaining cells around it will still proliferate and cancer will recur. Moreover, leaving safety margins around the imaged bulk is inefficient, because glioma migration is anisotropic, being facilitated along white fibres. Apart from this, the speed of migration in white matter is five times faster than in grey matter.

The ContraCancrum Project develops diffusive models to simulate the diffusive behavior of glioma, taking anisotropy and matter heterogeneity of invasion into account. These models use medical data (DICOM images) taken from the Oncologic Clinic of Saarland University in Germany. Tumour areas and initial glioma concentration are initially annotated by radiologists, using the DoctorEye application. DoctorEye is an open-source platform developed by FORTH, and is being used for fast and precise delineation of tumours, segmentation of clinical images and visualization of volumes.

The next step is to segment the images to white/grey matter and extract the direction of white fibres using data with Diffusive Tensor MRI. As a subsequent step, the model uses numerical methods to predict the concentration of glioma after some time. Parameters for therapy are also included in the model, thus differentiating the results for different schemes.

The predicted tumour is then visualized in either two or three dimensions, with the initial state of the tumour being visible. An example of visualizing a simulated brain tumor after 65 days of evolution, using the DoctorEye Tool, is presented in Figure 1. The initial tumour is reddish, while the simulated tumour is greenish. 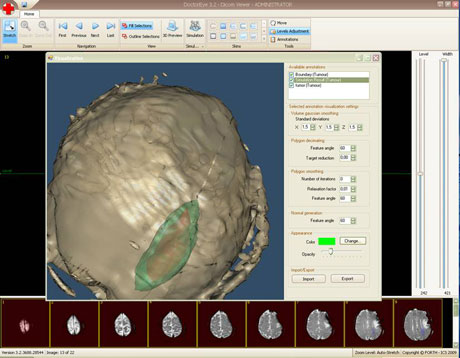 The modelling and therapy parameters used in the diffusive models are initially extracted from the literature. The model is then validated using clinical data from the same patient taken at different times. Real and simulated data are compared by clinicians, and metrics of model efficiency are extracted.

Techniques
The core idea behind the implementation of our diffusive model is that concentration of glioma cells in brain follows the diffusion reaction equation. This partial differential equation cannot be solved algebraically, thus iterative numerical methods have been developed for approximating its solution. Finite Differences have been used for meshing the brain, while the biconjugate gradient method solves the derived big sparse system of equations. The result of the solver is the estimated concentration of glioma cells in the brain after a specific period of time.

In future, ContraCancrum aims to incorporate the deformation of brain matter caused by proliferating cells. Biomechanical Engineering techniques suitable for this purpose have been proposed in the literature and are currently under research.

Please contact:
Kostas Marias
ICS-FORTH, Greece
Tel: +30 2810 391 672
E-mail: This email address is being protected from spambots. You need JavaScript enabled to view it.