by Petr Pecha and Radek Hofman

Potential failures in man–made processes can result in the accidental release of harmful substances into the environment. Risk evaluation and a decision-making process that is focused on protecting the population has the highest priority. Historically, accidents in nuclear facilities have revealed a lack of sufficiently advanced decision support software tools. Great attention has been paid to this topic since the Chernobyl disaster. The software system HARP (HAzardous Radioactivity Propagation) is designed for the fast assessment of the radiological consequences of such a release of radionuclides into the environment.

The HARP system is the application part of a grant project supported by the Grant Agency of the Czech Republic (period 2007–2009), which was solved in the Institute of Information Theory and Automation of the Academy of Sciences of the Czech Republic. The new version of the product is a complex software tool for modelling the radiological consequences of radionuclide releases due to the normal and emergency operation of a nuclear facility. Aerial transport of discharged radionuclides is studied up to a 100km radius from the pollution source. Dispersion, deposition and successive radioactivity migration towards the human body is simultaneously modelled. As the system contains a database of demographical data on the area of interest, it can evaluate the major radiological quantities and the radiological burden on the population due to different pathways of irradiation in both the early and the late phases of a radiation accident. 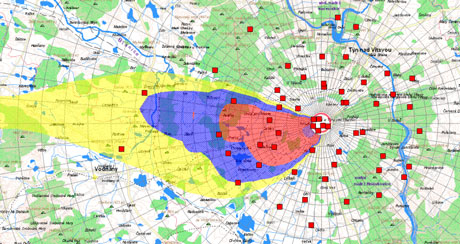 Figure 1: Prediction of terrain contamination based on meteorological forecast due to a continuous release of mixture of radionuclides just after the three hours since the release start. Red squares denote locations of fictitious measuring stations providing measurements for assimilation with the model predictions.

The core of the system is an atmospheric dispersion model. Generally, the modular architecture of the system enables an arbitrary dispersion model to be inserted. The default is the segmented Gaussian plume model. Although simple, the Gaussian model is consistent with the random nature of atmospheric turbulence and is an approximate solution of the Fickian diffusion equation. Proven semi-empirical formulas are available for the approximation of important effects like the interaction of the plume with proximal buildings, momentum and buoyant plume rise during release, power-law formula for estimation of wind speed changes with height, depletion of the plume activity due to the removal processes of dry and wet depositions, radioactive decay and creation of daughter products, dependency on physical-chemical forms of admixtures and land-use characteristics, plume lofting above the inversion layer, and so forth.

A special emphasis is laid on the proper treatment of types of input parameter fluctuations, in the sense of differentiation between variability and uncertainty. Some model uncertainties arising from the conceptual limitations can be roughly estimated on the basis of an ensemble-based approach with alternative parameterization of physical effects taking place in the atmospheric dispersion. The system offers an extensive interactive graphical user interface for presenting a wide range of outputs important for decision makers. Thus, the system also comprises a simulation and training tool enabling responsible staff to improve their knowledge and perception of the problem details. The HARP code has proved useful in the fields of evaluation of environmental impact assessment (EIA) and probability safety assessment (PSA) studies, where the influence of operation of a nuclear facility on the surrounding environment is appraised.

Advanced data assimilation methods based on Bayesian filtering developed within the grant project are incorporated into the assimilation subsystem. This means that the system offers a framework for the embodiment of relevant information from different sources, such as measurements and expert judgements, in a statistically optimal way. Provided that the system is connected to a monitoring network, it can be run in the online regime, where the subjectively chosen parameters regarding the release scenario (magnitude of release etc) are iteratively re-estimated upon measurements. This assimilation methodology can be also used as a tool to test the different topologies of a monitoring network and select the best one with regard to its functionality and to economical and other constraints.

The HARP system is tuned and tested in cooperation with National Radiation Protection Institute of the Czech Republic in Prague, where the product is connected to a database server providing up-to-date short-term meteorological forecasts on a three-dimensional grid. Exploitation of detailed meteorological data further improves the reliability of the embedded dispersion model.