Tsunami waves (long waves) can be efficiently simulated by numerical models solving the Shallow Water equations. Recently, FORTH-IACM has used depth-averaged computational models in shallow water with an emphasis on complex 3D domains in the context of some EU projects. One of these was TRANSFER (Tsunami Risk ANd Strategies For the European Region).

The main goal of the TRANSFER project - an FP6 project, with 30 partners from 12 countries - was to contribute to the understanding of tsunami processes in the Euro-Mediterranean region, to improve numerical models, the vulnerability and risk assessment from tsunami hazards, and to identify best strategies for reducing tsunami risk. For the application of methodologies, seven test areas in different countries were selected as test cases, from among which the area of Rhodes-Fethiye in the south-east Aegean Sea was chosen as the ‘master test case’ of the project. For all these areas, innovative probabilistic and statistical approaches for tsunami hazard assessment were applied as well as up-to-date techniques for computing inundation maps. Many tsunami scenarios were envisaged for these areas; vulnerability and risk were assessed, and prevention and mitigation measures were defined.

FORTH-IACM participated in TRANSFER with significant contributions in various tasks, and was the leader (responsible institution) for the production of tsunami inundation maps. All methodologies developed by FORTH-IACM were applied to the master test case, focusing on the Greek island of Rhodes, and especially on the capital city (Rhodes). Under this task, the work of FORTH-IACM was the production of inundation maps along the coast of the city for large tsunami scenarios, the production of a detailed vulnerability and risk analysis and the development of tsunami impact prevention and mitigation strategies.

The tsunami hazard estimation was based on numerical modelling using a full tsunami simulation (generation, propagation, and inundation) with the MOST (Method of Splitting Tsunamis) numerical model (Titov & Synolakis, 1998), coupled with updated and highly accurate bathymetry and topography data. The model implements an elastic fault plane mode to calculate an initial condition, which in turn is propagated across the deep sea by solving numerically the Nonlinear Shallow Water equations with a split-step, characteristics-finite difference scheme. Finally, the coastal flooding and inundation is simulated by extending the propagation calculations with the aid of a multi-grid run-up algorithm. The code requires as input detailed information on seismic source mechanisms, gridded bathymetric data information for the open sea propagation, and a set of gridded Digital Elevation Models (DEM) containing bathymetry and topography for use during the inundation phase. Accurate bathymetry and topography data for Rhodes were purchased/collected from various sources, GIS-processed and coupled in the nested bathymetry/ topography grids shown in Figure 1. 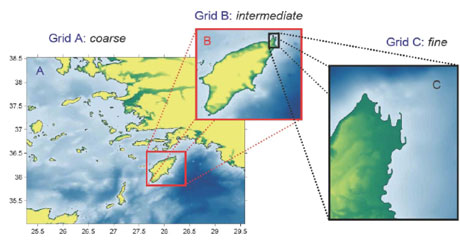 Figure 1: The study area and the areas covered by the three nested grids used by the numerical model.

Hundreds of simulations were performed based on both a deterministic and a probabilistic approach and various types of tsunami inundation (inland penetration) maps were produced (see Figure 2). The deterministic maps have been produced from simulations based on worst-case scenarios with the aim of assessing the impact of unusually large (hypothetical) seismic events. The probabilistic maps were the outcome of simulations based on multiple near-field tsunami scenarios and took into account the uncertainty associated mainly with the location of the seismic source. The comparison of the various deterministic and probabilistic scenarios led to the conclusion that the city of Rhodes is most heavily affected by the probabilistic scenario of a 1000-year event. All conclusions and results were utilized for the needs of the vulnerability and risk analysis. 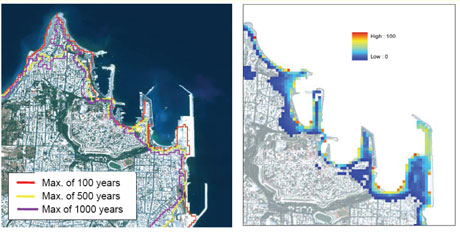 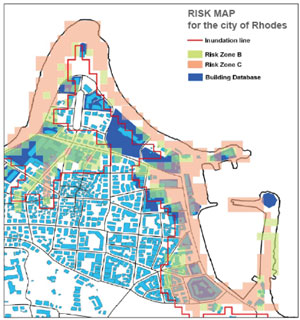 Figure 3: Tsunami risk map for the city of Rhodes (northern part of the port), with the different risk zones according to the flow depth and the inundation line.

For the purposes of the latter task specific basic data were identified, collected and analysed in order to obtain estimates of vulnerability and risk. To this end, elements such as land cover/use, buildings and coastal structures and infrastructure (roads, ports, piers) were identified, as well as tourist populations with high seasonal variation. All these relevant data were combined with the results of simulations and used to produce flooding risk maps and their representation within a GIS. The estimation of tsunami risk was based on the inundation maps as well as on the computed values of the flow depth in the coastal areas. Tsunami risk zones were defined and presented in GIS layers and maps, see Figure 3. Based on this analysis, the FORTH-IACM team developed and proposed detailed recommendations.

Please contact:
Evangelia Flouri
IACM-FORTH, Greece
E-mail: This email address is being protected from spambots. You need JavaScript enabled to view it.