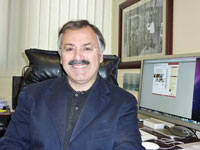 Domenico Laforenza has been appointed as the representative of the Italian National Research Council (CNR) on the ERCIM Board of Directors, following the resignation of Professor Francesco Beltrame. Dr Laforenza is the Director of the "Istituto di Informatica e Telematica" (IIT-CNR) in Pisa. He is also head of the Registry for domain names for Italy (ccTLD.it), and member of the Board of Directors of EURid, the European Registry of Internet Domain Names. In March 2009 Dr. Laforenza was appointed as Italian representative to the European Union “Future Internet Forum of the Member States” by the Italian Ministry of Research, Education and University. From 2006-2009, he was member of the Scientific Advisory Board of the CNR Department for Information and Communication Technologies. and is currently member of the Scientific Council of the Institute de Grilles of the French CNRS

Dr Laforenza has participated as CNR scientific coordinator in numerous European ICT projects (FP6: CoreGrid, NextGrid, GridCoord, XtreemOS, GridComp, Challengers, and FP7: S-CUBE) and was chairman of the Members General Assembly (MGA) of "CoreGrid: the European Research Network on Foundations, Software Infrastructures and Applications for large scale distributed, GRID and Peer-to-Peer". Since June 2006, he has been chairman of the Governing Board of the European project "XtreemOS".

His main research interests are in high performance computing, parallel and distributed systems programming, Grid and Internet computing and he was Head of the High Performance Computing Laboratory at the CNR Institute of Information Science and Technologies (ISTI-CNR) until 30 June 2008.