SOFSEM is a successful established annual international winter conference devoted to the theory and practice of computer science. Its aim is to present the latest research developments and so foster cooperation between professionals from academia and industry in various areas of computer science. SOFSEM 2010 was held in Hotel Bedøichov, Špindlerùv Mlýn, Czech Republic, on 23-29 January 2010.

SOFSEM (historically from SOFtware SEMinar) is the foremost Czecho-Slovak computer science conference. It is organized every third year in Slovakia, with the intermediate years being held in the Czech Republic.

SOFSEM offers a unique opportunity to quickly obtain a representative overview of the areas that are selected as the topics of the year. By tradition, the program consists of a dozen invited talks by prominent researchers, contributed talks selected by the program committee and the Student Research Forum. SOFSEM is organized in plenary and parallel tracks, with one track being devoted to the foundations of computer science. SOFSEM 2010 offered in addition three outstanding tracks: Principles of Software Construction; Data, Knowledge and Intelligent Systems; and Web Science. The schedule is tailored so that there is the opportunity to interact with other participants (invited speakers, researchers, students). 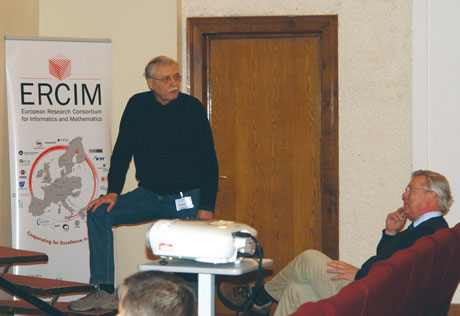 Jiri Wiedermann at the SOFSEM conference.

Since 1995, the SOFSEM conference proceedings containing the invited and contributed papers have been published in the series Lecture Notes in Computer Science by Springer Verlag; this year’s proceedings are the LNCS volume 5901.

SOFSEM is the ideal conference for discussions, for establishing personal contacts with colleagues, and for exchanging ideas. SOFSEM is well known for its familiar and inspiring atmosphere and is especially suited to young computer scientists.

An integral part of SOFSEM 2010 was again the Student Research Forum, organized with the aim of publishing and discussing students' projects. The forum offered students the opportunity to receive feedback on both the originality of their scientific work results and the work in progress. In total, SOFSEM 2010 was attended by some 120 participants, of whom more than 25 were students. Almost 80% of participants were not local.

As usual, SOFSEM also served as a platform for spreading ERCIM ideas directly. This is done via the presence of ERCIM President Keith G. Jeffery, his very active involvement in the SOFSEM Steering Committee, and through a small exhibition presenting ERCIM’s activities.

SOFSEM 2010 would hardly be so successful without the enthusiasm, time, energy and all the activities of two persons: the SOFSEM 2010 General Chair Prof. Jan van Leeuwen and the SOFSEM 2010 Organizing Committee Chair Dr. Roman Spanek.

All those interested are cordially invited to the 37th conference in the series, SOFSEM 2011, which will be held in Slovakia, Hight Tatras, from January 22-28, 2011.

Please contact:
Julius Stuller
SOFSEM Steering Committee Chair
Academy of Sciences of the Czech Republic/CRCIM
E-mail: This email address is being protected from spambots. You need JavaScript enabled to view it.