Researchers at Eindhoven University of Technology in the Netherlands plead the case for more redundancy in software development as a way of improving the quality of outcomes and reducing overall costs. 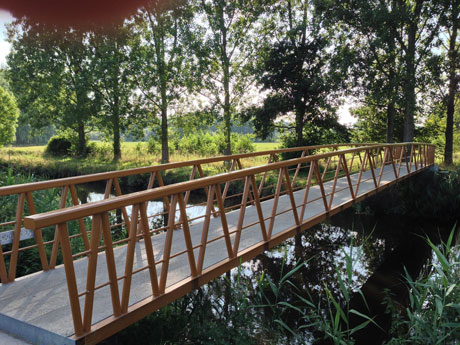 This footbridge (Nederwetten, The Netherlands) is made of more steel than strictly necessary to assure its quality. Software engineers must also consciously employ redundancy to ensure quality.

If an engineer was asked how reliable a critical artefact must be, a likely answer might be that a system can only fail once in 1010 times. For example, the probability of a ship’s hull collapsing during its lifetime or an active high water barrier failing to function when it is requested to do so, are typically in the order of 10-10. These numbers are so low that no engineer will ever experience the failure of his own artefact.

Considering such a question led us to reflect on how it may be possible to obtain similar numbers when designing software. In our previous work, we addressed this question by constructing a simple failure model and, we found a simple answer [1]. The only way to obtain such figures was by employing redundancy. Such an approach is very common in the more classical engineering disciplines. For example, when considering support columns with a failure probability of 10-5, an engineer can simply use two columns (where only one is truly necessary), thus allowing the overall failure probability to be increased to 10-10.

To examine how this redundancy approach applies in the software development field, we must realise that software is very different from physical artefacts. In physical artefacts, components fail due to wear and tear while software fails due to built-in errors, for example, a small typing error, an incorrect algorithm or the wrong use of an interface. When such an error is activated, the software fails. As software has many varied states, it can take a long time for some errors to become active, although as shown in [2] many programming faults lead to a multitude of erroneous states. Therefore, these latter faults are far easier to catch.

The probability of a hardware failure is almost negligible and thus, can be ignored. Software errors are always directly caused by either the programmers or program designers that left those errors in the code. As humans they have a large probability of doing something wrong [3]. At best, the failure probability of humans is only 10-3 but even this figure can only be applied in situations where the tasks are very simple and the programmer highly trained. For more complex tasks, failure probabilities of 10-2 or 10-1 are more realistic. In situations where a human must complete a non-trivial task under stress, they are almost certain to fail.

It should be obvious that the difference between the failure probability of a programmer and the desired failure probability of a critical piece of software is around eight orders of magnitude. Obvious measures, such as comprehensive training for programmers or the use of the most modern programming languages are excellent solutions but alone, these measures are unable to bridge this gap. Training can never accomplish an improvement of more than a factor 10-2 and for a complex task such as programming, even this is unlikely. Using modern programming languages, even domain specific languages, in combination with libraries can lead to substantial reductions in the amount of required code and thus, reduce the overall numbers of errors. However, here too, the possible reductions that can be achieved (at most a factor of 100) are insufficient.

Thus, the only way to achieve the desired failure probability of 10-10 is to consciously employ redundancy in the software design process. Typically, when constructing software, it must be described in several ways. These differing approaches should then be meticulously compared and challenged, with the goal of removing as many of the flaws that will be inherent in each description.

Active redundancy can be brought into the software design process through the introduction of high level models of the software, for instance, in the form of domain specific languages, property languages such as modal logics to independently state properties, independently (and perhaps multiple) constructed implementations, and a priori described test cases. The comparison of these different views can be done by model checking (software or models against properties), model based testing (model against implementation), and systematic testing (tests against model or software). Code inspection and acceptance tests are also fruitful, but lack the rigour of comparison that the more mathematical methods have.

By acknowledging that redundancy in design is the only way to obtain reliable software, one can then question certain trends. For instance, there is an on-going trend to eliminate the annoyance associated with static type checking. A language like Python is a typical example, as is the introduction of the auto keyword in C++ which allows a programmer to skip writing down an explicit type. The desire for code generation out of a model, or research in generating a model and software out of requirements put on the software introduce a single point of failure in the design process. These approaches do not pay tribute to the need for redundancy and discourage the detection of flaws that are inevitably made in the design of the software. This is a serious problem, as we all know that such flaws can wreak havoc when they happen to be activated.

Please contact:
Mark G.J. van den Brand
Eindhoven University of Technology, The Netherlands
Tel: +31402472744
E-mail This email address is being protected from spambots. You need JavaScript enabled to view it.

Jan Friso
Eindhoven University of Technology, The Netherlands
E-mail This email address is being protected from spambots. You need JavaScript enabled to view it.